Lions legend Martyn Williams reckons Wales have nothing to fear after being drawn alongside England in the 2015 Rugby World Cup. [more] 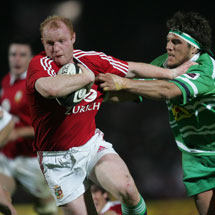 Lions legend Martyn Williams reckons Wales have nothing to fear after being drawn alongside England in the 2015 Rugby World Cup.

The auld enemies line-up in Pool A alongside Australia, Oceania 1 and the play-off winners.

The Pool has already been dubbed the “Group of Death” but Williams, who played in three Lions tours and three World Cups, reckons Wales can still reach the knockout stages.

“At this moment you would definitely say it’s the toughest group,” said Williams.

“They are all tough but this one stands out. England are the one team in the second-tier that we didn’t want to draw and that wouldn’t have happened if we didn’t drop down the rankings.

“Australia are not in the best place right now and have had a huge amount of injuries but they’ve still managed to pick up wins and will only improve.

“But without a shadow of doubt we can get out of the pool.

Williams, who retired in the summer following 16 years at the top of the game, is confident Wales have the talent to prosper and reckons they will be at their prime in 2015.

“This team is only going to get better,” said Williams.

“We’ve seen what they’ve done in the past, at the last World Cup and Grand Slam, and by 2015 they will be at their peak.

“It’s important we keep some of the old heads like Adam Jones, Gethin Jenkins and Mike Phillips going because all of the previous winners have had an experienced, hard edge.

Wales will face England three times in the build-up to the World Cup, starting in next year’s RBS 6 Nations, and a host of players will play together next year with the Lions.

The cross-boarder clash with the auld enemy is already the most anticipated fixture of the season but Williams, who faced England 14 times in his illustrious career, reckons it will reach a whole new magnitude, with added familiarity.

“If it isn’t big enough already, from now on every clash with England will be huge.

“It’s already the one fixture that everyone in the country looks forward to. “It’s always a huge game in the Six Nations, whether at Twickenham or the Millennium Stadium.

“As a player it will be so exciting. I can’t even begin to imagine how much hype will be around the game.

“There’s a lot of water to go under the bridge but every game between the two countries will be like a warm up to the World Cup.

“Form counts for nothing in those derbies – especially in a World Cup game.

“It’s all about who handles the pressure. You know you have been building towards it for four years and have just one shot.

“England will also have a young team so by 2015 both teams will know each other inside out after playing against each other and with each other for the British & Irish Lions.”