Cardiff Blues will be without two former Lions in their Heineken Cup tie with Montpellier. [more] 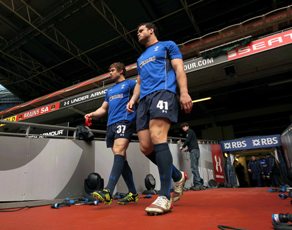 Cardiff Blues will be without two former Lions in their Heineken Cup tie with Montpellier.

Halfpenny will see a specialist this week following the neck injury he suffered while on international duty against Australia.

The fearless full back was stretchered off in a neck brace and taken to hospital after a sickening collision in the clash.

He was kept overnight before being released with no serious injury on Sunday morning but it is unknown when he will be able to return to action.

And Roberts hyper-extended his left arm during Saturday’s defeat to the Wallabies and had been ruled out of the Arms Park encounter.

Bradley Davies continues to be assessed with weekly neurological tests following the severe concussion he suffered at the hands of Andrew Hore.

“We are not expecting any of them to be involved this week,” said Blues backs coach Gareth Baber.

“Leigh is seeing a specialist this week. How long he will be out for I am not exactly sure.

“Jamie hyper-extended his arm. He’s had an MRI scan and we are monitoring him and seeing how he is.

“Bradley is seeing a neuro-specialist and they are monitoring how he reacts to tests.

“There are no long-term worries that we know of. He has taken a smack to the face. In the first two weeks, you’ve just got to let things settle down a little bit.

“The guys have had a tough series. That’s the nature of the game we play.

“When they play for Wales, you want them to play with their heart on their sleeve and really go for it.

“It is frustrating, but that’s what we deal with. There is quality in the squad and they are going to have to step up and play against Montpellier.”

The Blues are already without back-three trio Dan Fish, Tom James and Chris Czekaj and Baber admits it is a concern.

“We have issues and they don’t go away,” added Baber.

“This is the business and we have to try and squeeze as much as we can out of the players that take the field.

“We’ve just got to deal with it and crack on and plan for the weekend.”