The tougher the better says Gatland 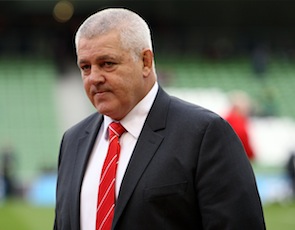 Wales were drawn alongside competition hosts England and two-times winners Australia in what has quickly become known as the ‘Pool of Death’.

But rather than bemoan his side’s misfortune at being handed the toughest group of all, Gatland found plenty of positives thanks to the manner in which his side came through another demanding pool on their way to the semi-finals just over a year ago.

“From our experience, the tougher the group the better,” said Gatland, whose team slipped to the third tier of seeds for Monday’s draw following their last-gasp defeat to Australia.

“We have put ourselves in this situation but our experiences from 2011 tell us that if you are in a tough group and you come out of it you are in a good position for the quarter-finals and semi-finals.

“We were superb against Ireland and we all know what happened against France when we could have won the match despite being down to 14 men.

“So, whoever comes out of our group, and let's not discount Fiji, is going to be in good shape physically and very well prepared.

“If you look at previous World Cups, teams have come unstuck being in easier groups. It has sometimes been the undoing of New Zealand because they don't get tested enough in the pool stages.

“If you look at the last two World Cups, the two finalists have come out of the same pool so that is why we have to be optimistic.”

Gatland took his troops to Poland for an intense training camp prior to the last global gathering and he intends to follow a similar path next time around.

“We will potentially look to go back to Poland to prepare and to train,” added Gatland.

“The best thing about the World Cup is the four or five months you get to prepare properly. The detail you can go into makes a massive difference and that is very exciting.

“After having good experiences in 2011, we have to go there believing this young side can learn and develop by 2015.

“We have to turn up in the frame of mind that we are good enough to compete and hopefully win it.”

Wales were good enough to beat the Wallabies last weekend but they let things slip in the final minute as Kurtley Beale raced over for the winning score.

It was the third time in as many games that the Welsh had seen victory ripped from their grasp in the closing stages against the Aussies and Gatland admits his side need to ensure they don’t make the same mistakes again.

“We have to learn from those situations. I am a great believer in 'what goes around, comes around' so I am optimistic the tide will turn at some stage.

“We have lost three games against them at the final whistle, which sometimes happens. Even though we are disappointed with the result, I thought we played some great rugby and took it to Australia.

“We have to identify and address how we cope with the last two minutes. I am being critical of myself and we must take the players through those situations and how to deal with them.

“It was obvious that Australia were going to move the ball from that last scrum and we didn't do anything. We didn't push, we didn't blitz. We allowed them to get easy yardage. We didn't communicate that and that is something I need to make sure happens.”