Quade Cooper now looks set to face the Lions next summer after reportedly agreeing terms to remain with the Wallabies. [more] 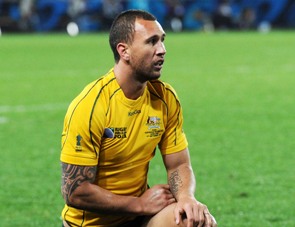 Quade Cooper now looks set to face the Lions next summer after reportedly agreeing terms to remain with the Wallabies.

The star fly-half will hold a press conference tomorrow where he is expected to announce that he has signed a new deal with the ARU.

Cooper had previously rejected an offer believed to be based on a pay-as-you-play concept but he seems to have had a change of heart despite announcing last week that he would be making his professional boxing debut in February.

The 24-year-old playmaker has been embroiled in controversy since describing the Wallaby camp as a ‘toxic environment’ and criticising Robbie Deans’ supposedly conservative approach and had appeared destined to move to head overseas or turn to rugby league once his current ARU contract ends later this month.

But Cooper has turned down a big-money move to France in favour of the chance to face Britain and Ireland’s elite in the three-match series in June and July 2013.

Sections of the Australian media have suggested that Cooper’s decision to stay on may damage Dean’s own position but the Wallaby boss certainly doesn’t feel that way.

''To be frank I don't want to pour over history, obviously it was a tough time for everybody. We all at the time did everything we could to ensure that it was a good experience. We stood right alongside Quade,'' Deans said in response to claims Cooper was isolated by the squad after his untimely outburst.

''Let's not forget I'm the bloke that picked him first and continued to pick him, continued to back him. I'm a believer.''

Despite signing the new deal, which runs alongside the three-year contract he has already committed to with the Reds, Cooper will still box on the undercard of Sonny Bill William’s clash with Francois Botha on February 8.

That bout will feature in the middle of a hectic period for Cooper, with the Reds playing their opening pre-season fixture of the year on February 2 against the Blues in Toowoomba before kicking off their Super 15 campaign at home to the Waratahs just a fortnight after his fight.