Ferris upbeat but unsure of return

Stephen Ferris says he's 'on the road to recovery' after his latest injury setback but no return date has yet been discussed. [more] 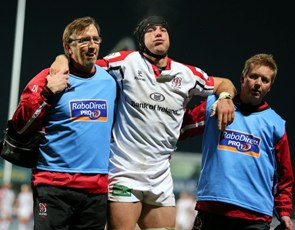 Stephen Ferris says he’s ‘on the road to recovery’ after his latest injury setback but no return date has yet been discussed.

The 2009 Lion underwent ankle surgery last night and could now be a doubt for Ireland’s Six Nations opener with Wales in Cardiff on February 2.

Ulster have opted against giving any indication as to when they expect their star flanker to be available for selection again but a return to action much before Rounds 5 and 6 of the Heineken Cup in mid-January would be a surprise.

"Stephen Ferris underwent surgery to repair a tendon injury which occurred as a consequence of the ankle damage he sustained in the RaboDirect PRO12 game against Edinburgh on November 2," read an Ulster statement.

"Stephen will be reviewed in the coming weeks to establish an accurate time period for recovery and to assess when he will fit to return to play."

The tendon problem that saw him miss his country’s autumn series is just the latest in a long line of injury issues to have plagued Ferris in recent months, with calf damage ruling him out of Ireland’s summer tour of New Zealand and a back complaint hampering his early involvement in this season’s PRO12.

Injury also scuppered his hopes of a Lions Test spot in South Africa three summers ago as his knee gave out to bring his tour to a premature end.

Ferris was one of the stars of the initial weeks of the last Lions adventure, scoring tries in each of his two appearances against the Golden Lions and the Cheetahs in Johannesburg and Bloemfontein.

The 27-year-old has spoken of his desire to make a second tour next year and that goal will hopefully aid his latest recovery and rehabilitation process.

"And so another journey begins…" tweeted Ferris.

"Thanks for all the MSG and tweets that I have received, it's been overwhelming. Operation went well and I'm on the road to recovery."