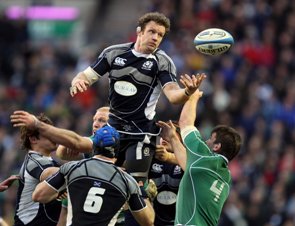 The 34-year-old, who was a Lion in 2005, called it quits after a move to Glasgow failed to come to fruition.

White had been without a club since his contract with French giants Clermont Auvergne expired in the summer but had been rumoured to be on the brink of a return to the Warriors.

But a deal with Glasgow never materialized and that persuaded the ex-Scotland skipper to hang up his boots.

"I won't be playing professional rugby again. We've just had a little girl, so I'm on daddy duty for a while, which is great.

"I was certainly keen on a move back to Glasgow and there were signs of interest at their end and a lot of talk in the press about it.

"Unfortunately, it never quite happened. I would have liked to go there, but it wasn't to be."

The combative back rower picked up the Players’ Player of the Year award in both the English and Celtic leagues and captained Scotland at the 2007 World Cup.

He was called up as a late replacement for the Lions seven years ago after England flanker Richard Hill was injured in the first Test against the All Blacks.

White made his solitary appearance for Britain and Ireland’s elite in the final mid-week game against Auckland in between the second and third Tests.