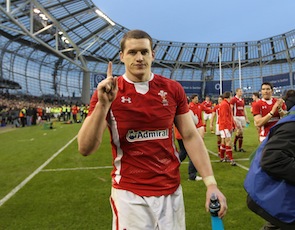 He was named in Warren Gatland’s side to face Australia on December 1, but failed to shake off the injury and has now been ruled out for up to two months.

"Ian has been troubled by an ongoing problem with his right knee since being unable to complete the Samoa game last month,” said Ospreys head physio Chris Towers.

"Investigations and consultations with specialists have resulted in him undergoing a keyhole procedure, as a result of which he will be sidelines for six to eight weeks."

If sidelined for eight weeks, Evans could return for the LV=Cup clash with Newport Gwent Dragons.

But that would leave the 25-cap second-row desperately short of game time ahead of Wales’ Championship kick-off with Ireland the following week.

Evans is the latest fitness worry for Wales, who endured an injury-ravaged autumn campaign.

Aaron Jarvis, Alun Wyn Jones and Dan Lydiate will all miss the beginning of the tournament while Jamie Roberts, Bradley Davies, Leigh Halfpenny and George North are currently sidelined.

The news is a major blow to the two-time Grand Slammer, who has been tipped for a place on next year’s Lions tour.

All four front-line Welsh second-rows are in the running to jet Down Under, in one of the most fiercely competitive positions.