Joe Launchbury has been named England's Man of the Series following his impressive displays in the 2012 QBE Internationals. [more] 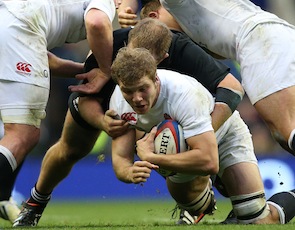 Joe Launchbury has been named England’s Man of the Series following his impressive displays in the 2012 QBE Internationals.

The 21-year-old Wasps lock beat off competition from Alex Goode, Chris Robshaw and Geoff Parling to scoop the award.

He made his debut from the bench against Fiji and made another effective cameo appearance against Australia.

Launchbury was rewarded for his fine form with a starting spot against South Africa and he held onto the jersey for the famous 38-21 victory over New Zealand.

"To win this award is massively humbling and I'm grateful to everyone who voted – to be honest I was shocked to even be shortlisted,” said Launchbury.

"It's been an amazing month for me, to make my debut in that first QBE International against Fiji was a massive honour – and at the time the biggest achievement of my career – but as the weeks went by I felt like I grew in confidence and for it all to culminate in that amazing win against New Zealand topped it all off.

"As Tom Wood said after the New Zealand game, although he won man of the match, any number of players could have taken the award, and that's exactly how I feel picking up this award.

"You're only as good as the 14 players around you and even when our backs were against the wall we stuck together."