Two former British & Irish Lions outside halves, Gareth Davies (1980) and Rob Andrew (1989 and 1993), were back at the Varsity Match at Twickenham this week joining in a special celebration. [more] 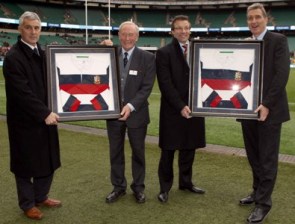 Two former British & Irish Lions outside halves, Gareth Davies (1980) and Rob Andrew (1989 and 1993), were back at the Varsity Match at Twickenham this week joining in a special celebration.

While Oxford and Cambridge met for the 131st time 140 years on from their opening encounter in 1872, the Lions decided to commemorate their vast contribution to the 28 overseas tours ahead of next year's 125th anniversary visit to Australia.

Both club Presidents, Oxford's Peter Bridges and Cambridge's Mark Bailey, received a framed jersey from the 1888 tour to mark the fact that Cambrige have provided 30 playing members to the British & Irish Lions touring teams and no fewer than 52 players who have been through the University have been on tours. Oxford have provided 10 playing members out of a total of 29 alumni who have achieved the ultimate honour in British & Irish rugby.

In 2005, when Leicester Tigers provided 8 players to Clive Woodward’s touring party in New Zealand, it was a modern day, professional record. Yet way back in 1891, when the second Lions tourists visited South Africa for the first time, there were no fewer than 14 Cambridge men in the party of 21 – with two Oxford men in tow as well!

Of those 14 players, 10 were actually still students, one of whom, Randolph Aston, set an all-time Lions record of 31 tries on the tour in a mere 20 games. The Lions played 20 games on that trip and won them all. Not only that, they scored 226 points and conceded only one!

The ‘Class of 1891’ followed in the footsteps of Welsh international Will Thomas, who was part of the first great adventure undertaken by the Lions in 1888 when they headed to New Zealand and Australia.

That inaugural trip was an incredible escapade, although the players were handsomely rewarded. They left in March and returned in late October. In between, they played 35 rugby matches and 19 games of Aussie Rules – and there were only 21 of them, one of who, Jack Clowes, was professionalised on the day the tourists left for New Zealand.

Thomas was given a £15 clothing allowance before he left and then paid anything up to £200 for his time and trouble as the two promoters, England cricketers Arthur Shrewsbury and Alf Shaw, shared out the takings from the unsanctioned tour.

The last current Oxford student to go on tour was the Irish international full back Hug MacNeill in 1983, while Cambridge University have to go back to scrumhalf Alun Lewis in 1977.

Mike Gibson made the first of his record equalling five Lions tours back in 1966, once he had got his finals out of the way, and the current chairman of the Lions committee, Gerald Davies, followed the same path in 1971 before he joined Gibson in New Zealand for the greatest of all Lions tours.

Davies, and his fellow Cambirdge Blue, John Spencer, still have an influence on Lions rugby as members of the Lions committee, bringing the varisty connections with the world famous touring team right up to date.