Australia are determined to ensure they don't have to face Wales in Cardiff at the 2015 World Cup. [more] 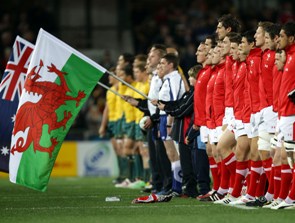 Australia are determined to ensure they don’t have to face Wales in Cardiff at the 2015 World Cup.

The Wallabies, who take on the Lions in a three-Test series Down Under next summer, were pitted alongside both Wales and England at last week’s pool draw in London.

The Millennium Stadium has since been mooted as a possible venue for the mouth-watering clash between the Wallabies and Warren Gatland’s Grand Slam Champions, with WRU boss Roger Lewis quick to press his wishes for as many Wales games as possible to be played at what he described as “the finest rugby stadium in the world”.

But the Australian Rugby Union have made their own position on the matter clear, with a spokesmen insisting it would be unfair for them to pack down on Welsh soil given that it is England who are the host nation of the next global gathering.

"We would naturally expect fairness and equity when it comes to deciding venues for the tournament and determining which teams play where," an ARU spokesman told The Rugby Paper.

"To that end we would consider it highly inappropriate for Wales to be playing any of those matches at home.

"England is the host of the event, not Wales. We are mindful that the final decision rests with the Rugby World Cup board."

Englandand Wales had reportedly agreed that Gatland’s men would use the Millennium Stadium as their World Cup base prior to them being drawn in the same pool.

But nothing was set in stone and the ARU believe allowing Wales to have home advantage in any of their Pool A fixtures would hand Gatland’s men an unfair advantage.

The entire schedule for the 2015 World Cup is anticipated to be in place by the end of March.