Jake White says he would love to coach the Wallabies. [more] 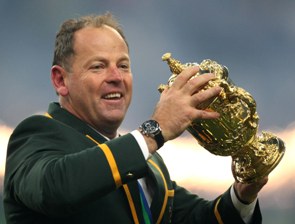 Jake White says he would love to coach the Wallabies.

South Africa’s 2007 World Cup winning boss is currently in charge of Canberra-based Super 15 side the Brumbies but he has now openly stated his desire to coach the Australian national team.

"Obviously my focus is here with the Brumbies. I am not someone who ever looks too far ahead. I know how quickly things can change. But you ask would I like to coach the Wallabies. Of course that is a dream job," White told The Australian.

"They are one of the premier rugby teams in the world and I would love the opportunity to be a part of the Wallabies set-up.

"It was a very conscious choice I made to come and coach at the Brumbies.They have always been regarded as an organisation who pushed the boundaries and were at the forefront of innovation in world rugby.

"After I finished with the Springboks, I knew I wanted to get back into coaching, but I needed to wait for the right job, a job which would be mutually beneficial. As a coach, you need to be growing and learning every day, particularly if you have a desire to coach at international level, which I most certainly do.

"That passion has not died in me. It is the ultimate test and I believe I have a great deal to offer as an international coach."

Deans, who took over from John Connolly in 2008, led the Wallabies to a first Tri Nations triumph in a decade last year but has seen criticism of his regime gather pace in the 15 months that have followed.

Defeat to Ireland at the group stages of last year’s World Cup led to a semi-final exit at the hands of New Zealand, with a summer reverse to Scotland and a disappointing Rugby Championship campaign prompting many to call for his head.

And even though the former Canterbury Crusaders coach is contracted to continue with the Wallabies until after next summer’s series with the Lions, talk is already abound as to who will replace him when his deal runs out at the end of 2013 or when the ARU decide to relieve him of his duties.

Reds chief Ewen McKenzie is the bookies’ favourite but Brumbies skipper Ben Mowen and assistant coach Lawrie Fisher say their boss has what it takes to be in the running.

"He just seems to know the right buttons to push," said Mowen, whose team finished just a bonus-point shy of the Super 15 play-offs in their first season under White’s stewardship.

"He has a relationship with each player that is unique and coaches like that are the sort of blokes you want to play for.

"I know they say (legendary rugby league coach) Wayne Bennett has a similar rapport with his players. The other thing Jake does is surround himself with good people."

"You only have to look at Jake's track record to know he would be an outstanding appointment," added Fisher.

"Jake's great strength is his ability to sell a message and get everyone pulling in the same direction.

"When you have that, it is a very powerful thing. The only thing for me is, I suppose I am a little bit old-school where I would like to see the job go to an Aussie, but that's just me."