Andy Irvine says the magic of the Lions needs to be accompanied by series success in 2013. [more] 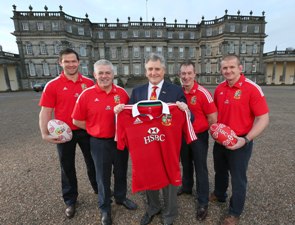 Andy Irvine says the magic of the Lions needs to be accompanied by series success in 2013.

The Lions tour manager believes the legendary status associated with Britain and Ireland’s elite is as great as ever but he recognizes the need to see off the Wallabies next summer.

Irvine toured three times with the Lions as a player, experiencing a stunning series victory over the Springboks in 1974 before touring New Zealand in 1977 and South Africa again in 1980.

He acted as chairman on the last Lions adventure in 2009 when Sir Ian McGeechan’s men came agonizingly close to beating the Boks in Durban and Pretoria before winning the final Test in Johannesburg and now he wants a return to the glory days of ’71, ’74 and ’97 in order to keep the Lions’ flame burning bright long into the future.

“There is a lot of pressure on us to win Down Under,” said Irvine.

“2005 was a very low point because we were very, very well beaten. 2009 was a big improvement. Although we lost the series, we were incredibly competitive.

“I’m slightly hesitant to say we were unlucky but I think if that series had been refereed like a boxing match, on points by neutral judges, they’d have said the Lions were the better side.

“And make no mistake, we’re going out to Australia with the firm objective that we’ve got to get the victory.”

Irvineknows better than most exactly what it means to be a Lion and he insists he sees the same pride and passion in today’s generation of tourists as he did in his day as one of the game’s leading full backs.

And it’s not just the British and Irish stars who love what a Lions tour brings. Irvine has seen the manner in which the South African and New Zealand public embraced the concept and he knows a similar scenario lies in wait in Australia in June and July of next year.

“What makes the Lions so magical? It’s the level of competition. You have all the best in the four countries and therefore each player in the Six Nations will be desperate to shine to get on that plane,” added Irvine.

“So the players themselves are desperate to be selected and, on top of that, you have 20-30,000 fans travelling down to Australia which shows the popularity.

“Last year when the schedule was announced I did a press conference with Robbie Deans, the Australian coach, and said to him ‘you are under the same pressure as ourselves with players leaving for France’.

“Matt Giteau had just become the latest Australian player to move but Robbie said ‘not one of our players will go because they are all desperate to play against the Lions. They only get that opportunity every 12 years but I am worried about what happens after the Lions tour. The best thing that could happen to Australian rugby is the Lions coming over. It means to much to our boys and to yours.’

“Those remarks sum up, for me, the appeal of the Lions.”