Lions keep an eye on Wilko

Jonny Wilkinson could be in line for a third Lions tour. [more] 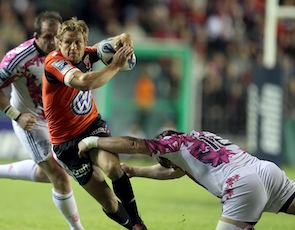 Jonny Wilkinson could be in line for a third Lions tour.

The World Cup winning fly-half has not pulled on the Red Rose since October 2011, after announcing his retirement from the international game.

He is currently starring for Toulon, who sit five points clear at the top of the Top 14,  and Warren Gatland is keeping a close eye on his progress.

"If we take the France-based players, our preferred option is that they are on the plane with us," said Gatland.

"We know what a quality player Jonny is. He is out of international rugby but he is playing in a side that is winning, and he is definitely one we are keeping an eye on.

"The most difficult thing is we will be getting the squad together for almost the first time on the plane.

"But if you look at guys at Toulon for example, they could be playing in a final the same day as our first game in Hong Kong.
So it is going to be difficult to integrate them and get them to be a part of the tour.

"It is not something we need to commit to now, and we will look at the strength-in-depth in certain positions, and injuries, but
the idea is to have everyone on the plane together."

Wilkinson toured with the Lions in 2001 to Australia and 2005 to New Zealand and the fly-half position is wide open.

Rhys Priestland has been ruled out for the rest of the season after rupturing his Achilles, leaving Jonny Sexton, Toby Flood and Owen Farrell as the main contenders.