Delon and Steffon Armitage are eying a return to the England set-up after starring against Sale Sharks. [more] 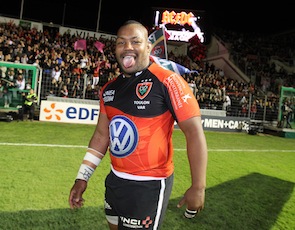 Delon and Steffon Armitage are eying a return to the England set-up after starring against Sale Sharks.

The forgotten England duo were in fine form as Toulon demolished the Sharks with a nine-try rout in the south of France.

Both brothers created tries before touching down for themselves and Delon hopes they will be rewarded for their fine form with a Six Nations recall.

“We certainly feel like we're being forgotten by England,” said the elder Armitage.

“But we’re both trying to do our best for Toulon with the hope of being called up.

“We're both ambitious competitors. If we keep playing at this level and other players get injured or are not performing, maybe we'll have our chance.

“We know there have been a lot of changes with England recently. A lot of very good, young players have come in, particularly at fullback and on the wing.

“But we have to keep the Six Nations in mind.”

The former London Irish pair have fallen into international wilderness due to England’s policy of only selecting home-based players.

Regardless of their international involvement Warren Gatland has already confirmed he will consider selecting players based in France for next year’s Lions tour.

But Armitage is in no doubt that he youngest brother is the best openside flanker at Stuart Lancaster’s disposal.

“As far as my brother is concerned, I can't see any reason why he shouldn't be starting for England. He has everything it takes. He is good in the contest, a good carrier, good in the scrum, can play 6, 7, 8 and even on the wing!

“If he carries on playing like this, I can't see how they can ignore him for the Six Nations.”