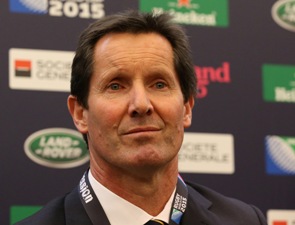 Deans is preparing to lead the Wallabies into battle against the Lions next summer but he was heavily linked with the Kiwi post before moving to Australia.

The native New Zealander was tipped to take over from Graham Henry after the world’s best team crashed out at the quarter finals of the 2007 World Cup.

But despite an apparent public clamour for Deans to be appointed, the New Zealand Rugby Union kept their faith in Henry and assistants Hansen and Wayne Smith, while Deans went on to accept a contract across the Tasman.

And now Hansen, who was named All Black boss earlier this year, has given his take on the situation by claiming that Deans simply went through the motions in his interview process in order to be perceived as a ‘martyr’ by his fellow countrymen.

“If you want my honest opinion, I don't think Robbie wanted it (the All Blacks job]) anyway,” Hansen told The Weight of a Nation, a television documentary on the story behind the 2011 World Cup that screened in New Zealand on Sunday.

“I think Robbie had already signed for Australia.

“I think he just went through the motions and wanted to be the martyr if he didn't get it, so he wins on both sides of the table.

“That's how I felt about it because you don't go to a (NZRU) selection meeting and when asked, 'Who is going to be your running mates?' – knowing that the opposition (Henry) has got two pretty good candidates (Hansen and Smith) behind him – with a wishy washy answer. He did.

“And that's why he lost the job, from my understanding. So, did he really want the job?”

Henry and Smith have since admitted they were as surprised as anyone when Deans didn’t get the job, even though the decision ultimately led to the All Blacks winning the World Cup in 2011.

“In our gut, we probably thought that Robbie would get the job,” added Smith.

“And I don't think any of us would have begrudged that, because of his record and how well he had done.

“I still remember – Steve and I didn't have to go to the interview and 'Ted' (Henry) did – the phone went that evening and it was Ted saying, 'we're buggered mate'. And I said, 'oh well, Ted, at least we had a crack at it and he said, 'Oh yeh but the interview didn't go well and I think we're buggered'.”