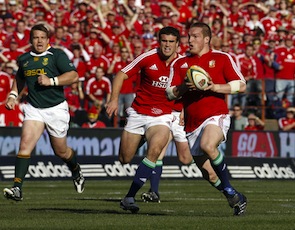 The Triple Grand Slamming Welsh prop joined the French club in the summer.

But he has largely played second-fiddle to fellow former Lion Andrew Sheridan, leading to suggestions that he is unhappy in France.

Speculation over the prop’s future has intensified but Toulon team manager Tom Whitford insists he is staying put.

"There's no reason why he'd want to leave us at the end of the season.

"He played against Sale at the weekend and had a good game as well so as far as we're aware there's no reason why he'd want to leave us at the end of the season.

"He'd obviously like to play a bit more, but I think it takes a bit of time to adapt to playing in France sometimes.

“With a bit of luck he'll keep going and keep playing well and his chance will come to play even more games.

"It's not just him. Two years ago Carl Hayman, when he first arrived, took a few months to adapt to playing in a French club in the French championship, hence why Gethin is taking a bit of time as well, perhaps.

Jenkins also lost the Wales No.1 jersey during Wales’ autumn clashes against Samoa and New Zealand.