Brian O'Driscoll has his hearts set on a fourth Lions tour, but only if the 10-match adventure is accompanied by a series win. [more] 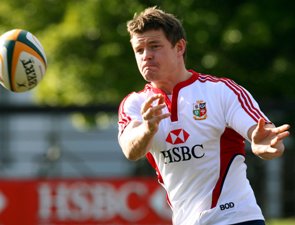 Brian O’Driscoll has his hearts set on a fourth Lions tour, but only if the 10-match adventure is accompanied by a series win.

O’Driscoll has already featured on a hat-trick of trips south, starting with the Lions’ last tour to Australia 11 years ago.

But the legendary Leinster and Ireland centre hasn’t tasted Test success since his debut international against the Wallabies after being inured in the opening rubber against the All Blacks and then sitting out the victorious final clash with the Springboks through concussion.

And the prospect of simply ‘enjoying the experience’ of a return Down Under next summer doesn’t hold sway with O’Driscoll: winning is now all that matters.

"I don't want to go on four Lions tours and win none of them. People don't remember losing Lions tours, they only remember winning tours," O’Driscoll told the Daily Telegraph.

"If you said you can get on the trip to Australia but you are not going to win the series I would have no interest.

"The only reason to go on another Lions trip would be to win the series, to do something that I haven't experienced before. I've been to Australia before, I've seen a lot of the route and I've seen the all places. It's great but I can go on my holidays and do that. It's all about winning the series.

"Different guys will go at different stages of their careers and some will enjoy the excitement of a first trip, but I don't need any more experience, I just want to win one."

That sentiment has been echoed by many of the Lions hierarchy as Warren Gatland and co target a first series triumph since 1997.

"The Lions need to win one. They are wonderful trips but they are unsustainable if you go time and time again and the home nation always wins," added O’Driscoll.

"It's such a difficult thing in the modern era, and that's not to take away from the tours in the ‘70s and even prior to that. Now it's much more compact and the teams you play are more organised.

"This series is very winnable whatever team goes down there, but it's very losable too."