Drew Mitchell admits it would be "massive" to face the Lions following an injury-ravaged two years. [more] 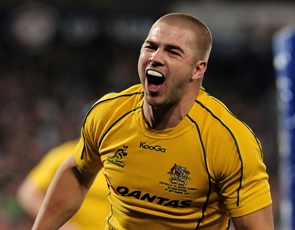 Drew Mitchell admits it would be "massive" to face the Lions following an injury-ravaged two years.

The Wallaby wing has spent more time on the treatment bench than on the pitch since dislocating his ankle while on NSW Waratahs duty against Queensland Reds in April 2010.

Mitchell has been struck by a succession of blows that could have ended his Lions dream and even threatened to finish his career.

He returned to action from the first ankle injury at last year’s World Cup but his tournament was cut short when he tore his hamstring against Russia. And while recovering from that setback, scans revealed complications with a bone spur from his ankle injury which then ruptured a tendon.

Mitchell faced surgery and at least 12 months out of action but the injury miraculously resolved itself.

He made yet another long-awaited comeback in the Rugby Championship and followed it up with three further appearances on the Wallabies’ recent European year.

And after finally coming through his prolonged injury nightmare, the 28-year-old reckons facing the Lions in 2013 would be an unforgettable experience.

“Playing against the Lions would be massive for myself, or anyone else,” said Mitchell.

“It comes around just once every 12 years. Some guys play 10 years for the Wallabies and don’t get the opportunity to play them.

“The last couple of years have been pretty tough. It’s been the toughest thing I’ve had to encounter in rugby.

“My lay offs have fluctuated a number of times from a few weeks, to a few months, a year, to you’re ready to play again and you play next week.

“It’s been one of those rollercoaster rides where every other week I had a different opinion and it was difficult to know where you’re at.

“But to get back to train, play fully and get selected on the spring tour was great. From where I was a couple of months ago and being told I wouldn’t play again, to being back in the Wallaby environment, just shows how quickly things can change.

“The whole period has made me realise the importance that any game could be your last.  It’s put me in the mindset to make the most out of every opportunity.

“We’re in a really privileged position to be able to wear this jersey. The time you wear the Gold and Green is very short so it’s important to make the most of it.”

Drew Mitchell was a Wallaby regular before a string of injuries

Mitchell will now be hoping he can stay injury free in 2013 to fulfill that prophecy against the Lions next summer. And, if the last two years are anything to go by, the Wallaby and Waratahs star is due a clean run.

The former Queensland Reds and Western Force back expects the Lions to bring a formidable squad Down Under as Britain and Ireland’s elite look to avenge their series defeat back 11 years ago.

He has fond memories of the aforementioned 2001 tour and is now determined to experience the pride and the passion, the intensity and the integrity, and the class and the quality of the Lions community at first hand.

“The Lions will have a tremendous team,” added Mitchell.

“Every time they play they come out with a strong squad and whoever plays them has to be right on top of their game to compete.

“The last one, in 2001, I was in year 12 of High School and I can really remember the atmosphere around all the cities.

“I vividly remember watching the first Test at the Gabba. It was fantastic, but not only in the ground but everywhere you walked there was a sea of red.

“In a way it’s similar to the World Cup and really takes over the cities and captures the imagination of the nation. But in a Lions series there’s just two teams involved. People wear their colours at the World Cup but it’s not just gold or red.

“Watching on the TV it was immense and to be involved and at the centre of that would be a tremendous honour.”