Lions is lifelong for Uttley

Roger Uttley says his experiences as a Lion have provided memories that will last a lifetime. [more] 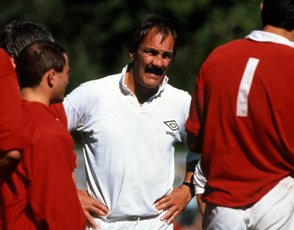 Roger Uttley says his experiences as a Lion have provided memories that will last a lifetime.

The former England back rower helped guide Britain and Ireland’s elite to series success as a coach in Australia in 1989, 15 years after he played his part on the 1974 Invincibles tour of South Africa.

And while five tours have now passed since his contribution as a coach and a further four since his involvement as a combative back rower, the former England skipper insists the experiences and emotions associated with those adventures remain as vivid as ever.

“Anybody who’s been a Lion will tell you that the Lions plays a big part in your life,” said Uttley.

“It’s a long time since I’ve been involved now, but my memories of playing in ’74 and being part of the coaching set up in ’89 are still very fresh.

“They were a major part of my own personal development and I will be forever grateful for the opportunity to represent the Lions and wear that red shirt. It was a fantastic privilege.

“There’s a tremendous sense of pride at being involved in two successful operations. The memories are still vivid and the friendships I made during that time are still real – you meet up and it’s as if you were touring yesterday, although a few of us are showing signs of wear and tear!

“You don’t have to be in each other’s pockets now to be mates. It’s that respect and that shared experience which means that you’ve got an empathy with the people who were around you at the time – virtually all of that is positive.”

Roger Uttley was assistant coach to Sir Ian McGeechan in 1989

Winning any series as a Lion is a huge achievement but to be involved in arguably the greatest Lions tour in living memory must be extra special.

Uttley featured in all four Tests of that historic series win over the Springboks 38 years despite being a relative newcomer to the international fold.

He began the tour as a second row, pipping Ireland’s Moss Keane to the last lock spot in the party, but was converted to a flanker during the trip.

Uttley made such an impression that he joined Lions legends Mervyn Davies and Fergus Slattery in the back row in Cape Town, Pretoria, Port Elizabeth and Johannesburg and wrote himself into the history books in the process.

And just as his efforts against the Boks had a huge impact on the Lions’ remarkable achievements there and then, Uttley insists his association with such a special pride is still paying dividends to this day.

“It was just a fantastic experience and I’m still living off that reputation,” added Uttley, who was a potential Lions captain in 1977 before injury ruled him out of the tour just weeks before departure.

“You go anywhere now, certainly in rugby circles, and people still talk about the ’74 team in hallowed terms.

“The truth of the matter is that not every Lions tour is successful, for a variety of reasons. Like most things in life, luck is about being in the right place at the right time and ’74 was exactly that for me.

“I’d only just completed my first international season in ’74. I was a young bloke – I was 24 – and I was involved in 16 of the 22 games and I played in the four Test matches. By the time of the fourth Test I was knackered and in bits and I probably shouldn’t have played but we drew that game to win the series undefeated.

“There were some great players who’d experienced success in ’71 down in New Zealand – the likes of Gareth Edwards, Gordon Brown, Mervyn Davies, Ian McLauchlan and JPR Williams and so on, so we had a lot of experience there.

“Willie John McBride was a fantastic captain. He was 35 years old so it was like going on tour with your dad, a well respected father figure who said, ‘Right, this is what we’ve got to do to win’.

“Then there was Syd Millar as coach and he had a very pragmatic approach. We just had to go out and do what the 2013 Lions are going to have to do and that is subdue the opposition up front.”

South Africa and Australia may place a different emphasis on the power of their packs but Uttley sees the need to put the same principles in place against the Wallabies as he and his team-mates did against the Springboks all those years ago.

The battle begins up front according to Uttley. And it’s a battle the 63-year-old is convinced the current crop of Lions can win.

“There’s no other way of playing down there: you’ve got to physically confront the Australians and dictate where it is you want to play. You’ve also got to be tactically astute.

“That’s the challenge for the top players in these isles – to come together and form a Home Unions team to go out and sock it to the Aussies, and I think we’ve got a good chance of doing that. I think it’s a really good time to be going down there.”