Lions assistant coach Graham Rowntree insists his focus will be on England during the Six Nations even if the tour of Australia will be at the back of his mind. [more] 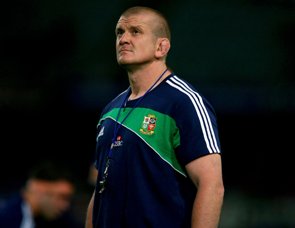 Lions assistant coach Graham Rowntree insists his focus will be on England during the Six Nations even if the tour of Australia will be at the back of his mind.

Rowntree will be hoping to improve on England’s second-place showing in 2011 when he and fellow Lions coach Andy Farrell concentrate on their day jobs this spring.

The man chosen to lead the Lions forwards Down Under in June and July admits the Lions won’t be far from his thoughts but that the Red Rose has to be his priority in February and March.

“The Lions will always be at the back of your mind. I’d be lying if I didn’t say that,” said Rowntree.

“But our day job is very much with England and the Six Nations. That’s a massive, massive task for us. It takes a lot of energy thinking about that.

“The Lions will kick in thereafter.

“But, in terms of preparation for the Lions, we’ll be doing lots of analysis on England’s opponents so we’ll have a selector’s hat on as well while analysing Scotland, Ireland and Wales.”

Rowntree and Farrell will miss England’s summer tour while they are away with the Lions but the former prop is convinced his country will benefit in the long run.

“We’ve only just got this England coaching crew together and we’re still a young group. What we’ll do in terms of our Argentinean tour and our replacements, I’m not sure yet,” added Rowntree.

“But that absence is far outweighed by the great experience both Andy and I will get in being part of a Lions tour.”