Warren Gatland is all set to get the perfect New Year's gift this week with the news from Leinster that three Test Lions from 2009, Brian O'Driscoll, Rob Kearney and Luke Fitzgerald are back. [more] 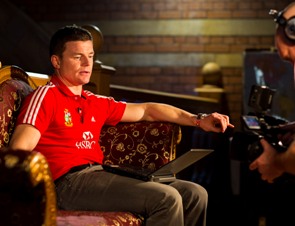 Warren Gatland is all set to get the perfect New Year’s gift this week with the news from Leinster that three Test Lions from 2009, Brian O’Driscoll, Rob Kearney and Luke Fitzgerald are back.

The talented trio have been long term injury victims this season, but Leinster head coach Joe Schmidt told the media after last weekend’s 17-0 home win over Connacht he expected to have them back in full training this week.

“We would be confident we would see Luke, Brian, Dave, Rob and Eoin all training fully next week and available for selection. That's a prospect that would be ideal,” said Schmidt.

O’Driscoll had suggested as recently as last week that he wouldn’t be ready until the last week in January, while Kearney had been thought to be a week behind in terms of medical schedule. But Schmidt expects to have both on the training field in Dublin this week and preparing for action in the PRO12 clash with Edinburgh at Murrayfield this weekend.

“They will be doing some graduated contact during the week, but both are very confident about it. Contact wasn't really the issue for them, it was more a discomfort trying to run,” said Schmidt.

“We don't foresee any problems, but we're not going to take any risks either. To be honest, I'm confident about both of them and Luke as well.

“I would love to have a really good headache this week because I've had some bad headaches in recent weeks and it would be a bit of a luxury. The problem I do have is that if we do get them back for Edinburgh there is not a lot of time to knit ourselves back together when we have to chase big games, Scarlets and, then, Exeter away.

“It would have been nice to get a run in of two to three games with those guys available and challenging for spots, but it's not a perfect world unfortunately.”

O’Driscoll is hoping to push for a fourth British & Irish Lions tour this summer 12 years on from his first. He lit up the 2001 series in Australia with a remarkable try in the Lions’ victory in Brisbane in the first Test.

Kearney will be hoping to battle to retrain his full back berth from the 2009 tour against Leigh Halfpenny, Stuart Hogg, Mike Brown, Ben Foden, Andy Goode, Simon Zebo and even Lee Byrne.