Ireland have received a triple Lion boost with Brian O'Driscoll, Rob Kearney and Luke Fitzgerald all set to return to action. [more] 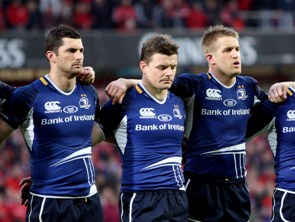 Ireland have received a triple Lion boost with Brian O’Driscoll, Rob Kearney and Luke Fitzgerald all set to return to action.

The star backs have all been selected by Leinster to face Edinburgh on January 4.

Their returns are a welcome tonic for Ireland ahead of their Six Nations campaign which kicks-off against Wales on February 2.

Triple Lions tourist O’Driscoll has been sidelined since October after he sustained ankle ligament damage in a league game against Cardiff Blues.

The 33-year-old was pencilled in for a return later this month but has made a swift recovery and is ready to press his claims for a fourth successive Lions tour ahead of schedule.

Kearney remains one of the favourites for the Lions starting full back berth in Australia having played in all three Tests against the Springboks in 2009 but he has spent all but 32 minutes of the season in the treatment room.

The 26-year-old injured his back in the PRO12 defeat to Connacht on September 28 and, like O’Driscoll, missed each of Ireland’s three games in the autumn.

Kearney makes his 122 appearance for the Dublin based province.

Fitzgerald, who also won Test honours for the Lions three years ago, has been out for even longer, with a neck problem meaning he hasn’t played at all this term.