Mike Blair's odds of making a second Lions tour have significantly lengthened after he announced his retirement from international rugby today. [more] 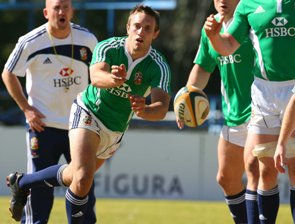 Mike Blair’s odds of making a second Lions tour have significantly lengthened after he announced his retirement from international rugby today.

The 2009 Lion is calling it quits as far as the Scotland scene is concerned after enjoying a decade of top-level rugby at Murrayfield.

As well as replacing Tomas O’Leary on the last Lions adventure to South Africa four years ago and receiving a nomination for the IRB World Player of the Year Award in 2008, Blair made 85 Test appearances between 2002 and 2012 – a figure that sees him sit behind only Chris Paterson in Scotland’s list of most-capped backs – and captained his country on 14 occasions.

The 31-year-old cited his summer move to French side Brive as one of the major reasons behind his decision to walk away from international rugby, although he also insisted that his choice was also born out of a desire to see Scotland succeed at the next World Cup.

“I’m in the very fortunate position of being able to decide myself when my international career ends. For me, that time is now,” said Blair, who was Scotland’s first-choice scrum-half on their summer tour of the southern hemisphere and their recent autumn series.

“The fact that I still feel attuned to playing at international level has made the decision harder but it’s not been reached lightly and I’m very confident that it’s the right decision.

“I have enjoyed immensely representing my country for more than 10 years and will miss that exhilarating feeling of running out to a capacity crowd with the whole country behind you. The noise when leading the team out for the first time as captain at Murrayfield against England in 2008, when we won 15-9, still makes the hair on the back of my neck stand up when I think about it.

“There’s no doubt that moving our family to France has played a part in my decision. Our son Rory is now at school here and we have an 11-week-old daughter, Lucy, who was born in Brive.

“However, it’s a combination of reasons that’s led to my standing down from international rugby, not just one factor.

“A place in the squad at the Rugby World Cup in 2015 is not a realistic personal target and, with that in mind, it’s right for Scottish rugby and the Scotland team, that other players gain experience in a pivotal position.”

Blair’s international retirement leaves 2005 Lion Chris Cusiter and his Glasgow team-mate Henry Pyrgos battling it out with Newcastle’s Rory Lawson for a Scotland starting berth in the Six Nations opener against England at Twickenham on February 2.

But while interim coach Scott Johnson clearly has plenty of quality at his disposal when it comes to the No9 shirt, former star Paterson believes Blair will definitely be missed.

“Mike was one of the most gifted and naturally skilful players I ever played alongside,” said Paterson.

“His ability to read a game and make the correct decision was brilliant. He was razor sharp in attack and his defence, especially when chasing back and cover tackling, showed how tough a player he was.

“I think he was involved in every match-day Scotland squad, when available for selection, for a decade which is a real reflection of how good a player Mike was – a great Scottish internationalist.”