QBE bring touch rugby to the heart of London

Playing a bit of touch rugby with two legends of the game like Lawrence Dallaglio and Ali Williams is about as good as a lunch break can possibly get.   [more] 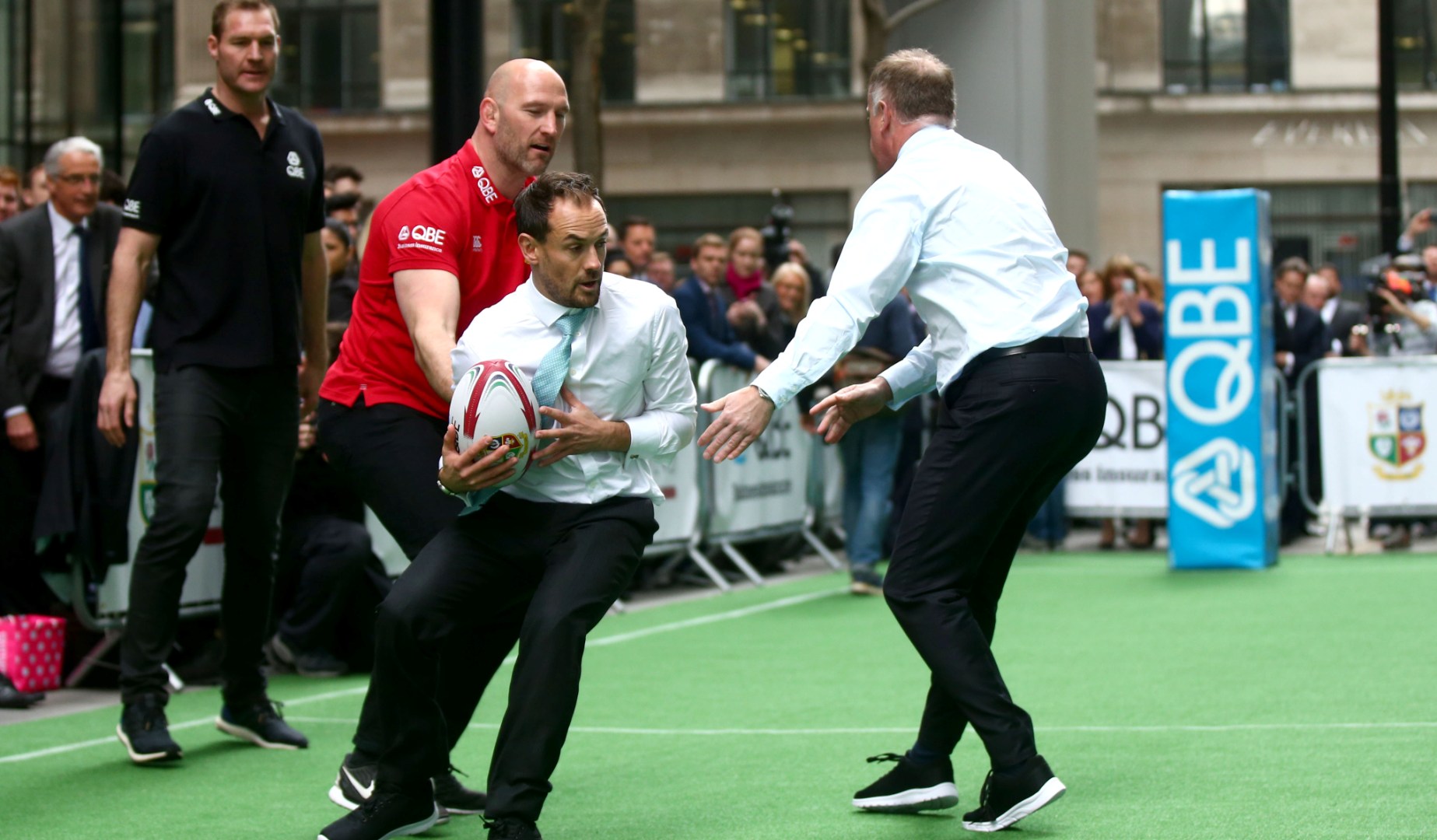 Playing a bit of touch rugby with two legends of the game like Lawrence Dallaglio and Ali Williams is about as good as a lunch break can possibly get.

And on Thursday that was exactly what a lucky few workers in the City of London were treated to by QBE – on the announcement of their partnership with The British & Irish Lions.

The specialist business insurer will become a Principal Partner of the Lions for the 2017 tour of New Zealand and to celebrate they erected a pop-up pitch in the heart of the capital’s financial district for some friendly three-on-three touch rugby.

Passersby on Lime Street were given a break from crunching numbers to watching some crunching tackles as the two legends did battle.

Along with three-time Lion Dallaglio and legendary former All Black Williams, soprano singer Laura Wright was also on sing for the crowd and then referee the games.
And Dallaglio enjoyed every minute of the clash.

“QBE have a long-standing relationship with rugby so it feels like a natural partnership and what better way to launch that team than with a little bit of rugby,” he said.

“We are here in the heart of the City getting people to take part on their lunch breaks in a bit of three-a-side touch. It was a lot of fun. It’s a bit quicker than I remembered it!”

And – in a taster of the rivalry to come next summer – it ended honours even over the afternoon.

“As rugby players we do get a bit fixated with what is going on out on the field,” said Williams – who started all three Tests against the Lions back in 2005.

“But without the sponsors and the support from the crowd it would not exist so it’s always good to give back.

“There were some good skills on show as well, I think the girls were probably the pick of them, the boys seemed to let their energy levels drop. The boys always start with a hiss and a roar but they died down while the girls I saw stayed very consistent!”

Two of the players who got involved on the day were Caroline Klein and Beth Cowan, who came out from to take part from the nearby Lloyd’s building.

A lunch break to remember

“We saw that something was happening on Twitter so came down on our lunch break and just had a brilliant time,” said Klein.

“I’ve split my skirt playing so i won’t be able to go back to the office now!” added Cowan.

“I don’t normally get to do something as fun as that in my lunch break. And to play with two rugby legends was amazing, not many people can say they have played rugby with Lawrence Dallaglio!”

The competitive juices were soon flowing all over again – as Williams and the passersby both noticed that old habits die hard.

“It was good to see Lawrence again, the old rivalry coming back – it never really goes away,” added the former All Black.

“There is mutual respect there for each other and we have had a good friendly game.”

Mark Golder was one of the first walking past to get involved and also noticed the competition intensifying.

“It was a lot of fun, Lawrence is a very accommodating team member and he wasn’t afraid to put a little shot into Ali which was a nice touch,” said the 25-year-old who works in insurance.

“I think it was an honourable draw in the end.”

Rob Curtis was another city worker to don trainers and get involved – “What a fantastic opportunity to play against a famous Lion like Lawrence and an All Black in Ali,” he said.

“I can now go down in history as having played against these great men – not many people can say that in the square mile!"