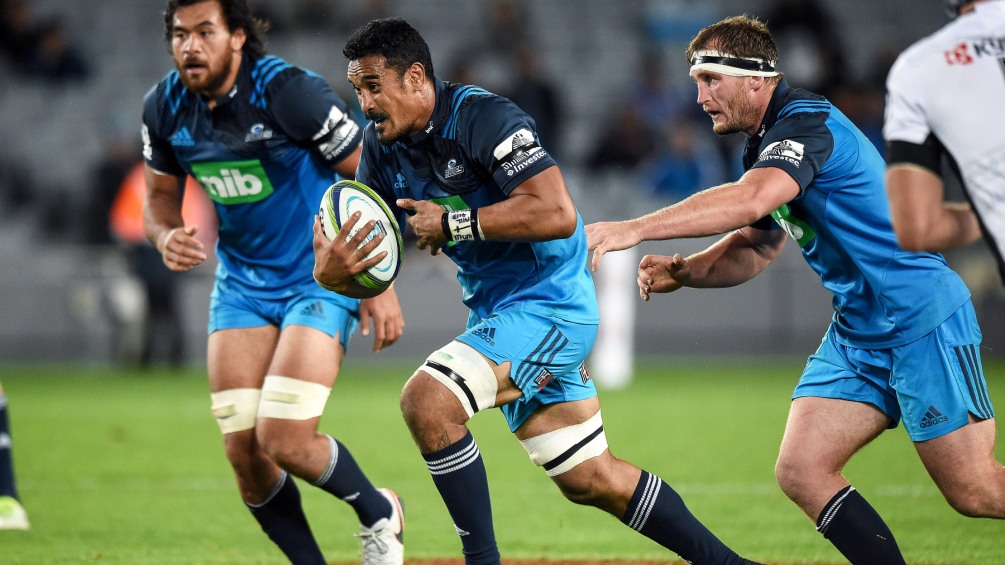 As we prepare for round ten, we've picked out some of the key points from the weekend ahead, particularly in New Zealand.

Jerome Kaino has been battling a shoulder injury and has eventually chosen to focus on rehab at the expense of the Blues captaincy.

Hooker James Parsons has been a more than able deputy to 67-times capped All Black Kaino and with the destructive blindside desperate to concentrate on recovering his fitness, he will take the reigns full-time until the end of the season.

Kaino insists he will be fit to take on Wales come June, but at 33 and with the likes of Elliot Dixon and Matt Todd on the charge, the two-time World Cup winner faces a battle on his hands to retain his All Blacks jersey.

Saturday’s opponents the Rebels top the Australian conference – but are still ten points shy of table-toppers the Chiefs – and Tana Umaga’s men will be reinvigorated after a bye week and hoping to build on their 23-18 win over the Sharks in Round Eight.

Weber on the charge

Brad Weber’s star has been on the rise all-season, the sparky scrum-half was being tipped for the All Blacks long before Tawera Kerr-Barlow was ruled out for five to six weeks with a broken hand.

Despite Kerr-Barlow usurping TJ Perenara as second-choice All Blacks scrum-half during the World Cup, Weber could eclipse the two with his club-mate Kerr-Barlow out injured and Weber in the form of his life.

At 25, Weber is no spring chicken, but he has lightning service, fleet of foot and plays with a maturity which frees Aaron Cruden, Seta Tamanivalu and Damian McKenzie to tear defences to pieces.

With the Chiefs 11 tries clear of the Hurricanes in the try-scoring charts and a point clear of Crusaders in the New Zealand conference, Steve Hansen could opt to bring in the cream of the Chiefs’ back-line and given Weber’s electric form he could well add to his solitary New Zealand cap.

The Chiefs continue their Super Rugby title assault against the Sharks on Friday in a game which saw three red cards last year – expect fireworks.

Michael Fatialofa rising above the pack

The Hurricanes have not lost to a South African side since they lost to the Stormers by a point in 2014, but they travel to Johannesburg to take on a Lions team who sit second in the South African conference and are the only outfit to defeat the Chiefs this year.

Chris Boyd’s side may have lost out 28-27 to Dave Rennie’s side last time out, but there were many positives for the Wellington side – Beauden Barrett was sensational in attack and Dane Coles turned in another world class performance.

Coles has run the most successful lineout in the competition with 93% accuracy and he has been ably assisted by Michael Fatialofa, the young lock has become an integral part of Boyd’s outfit this year, completing the shift from peripheral figure to immovable object.

From Sam Whitelock to Luke Romano and Brodie Retallick, the All Blacks are not short of second rows, but 23-year-old Fatialofa has proved himself more than capable of hanging with the big boys this season.

He is assured in the set-piece, formidable at the breakdown and has an astonishing engine. If he continues his meteoric rise, he could well become a familiar face for Lions fans.

The defending Super Rugby champions have picked a bad time to go off the boil.

Disappointing consecutive defeats to the Reds and Sharks have seen them slip to fourth in the New Zealand conference.

Top try scorer from last year Waisake Naholo’s injury absence since the opening round has been a undoubtedly been a blow.

But they will need to turn their form around fast with tough clashes against the Brumbies, Chiefs and Crusaders coming up on the horizon.

Naholo’s imminent return could reinvigorate the backline but it is up front that their ‘No Name’ forward pack needs urgent attention.

The Sharks gave them a going over last week and any repeat of that could see the Otago-based side slip out of a play-off contention altogether – a disastrous return for the defending champions.

Todd Blackadder’s side can rest easy this week after thumping Brumbies 40-14 in Canberra last time out.

Codie Taylor, Nemani Nadolo, Jone Macilai, Israel Dagg and Marty McKenzie may have grabbed the tries, but both their attack and defence was underpinned by a superb performance from flanker Matt Todd.

Todd has made 32 carries for 170 metres this season, made seven clean breaks and his try assist against Brumbies bordered on the spectacular. Stopping Scott Fardy in his tracks, he completed the steal in an instant, raced upfield and then fed Macilai to cross.

The 28-year-old may have a different skillset to Sam Cane, but he has been consistently excellent and may be an outside bet to add to his two All Blacks caps. If this is a bridge too far for Todd, he will certainly be an integral figure for the Crusaders as they go in search of a first Super Rugby title since 2008 in Blackadder’s final year.

New Zealand News
Previous story The First Match: The 1888 Tour gets underway
Next story Five things to watch out for this weekend