The 1888 Lions – ‘The fastest and hardest fought game ever seen’

The first rugby tourists from the northern hemisphere arrived in April 1888 in New Zealand. [more] 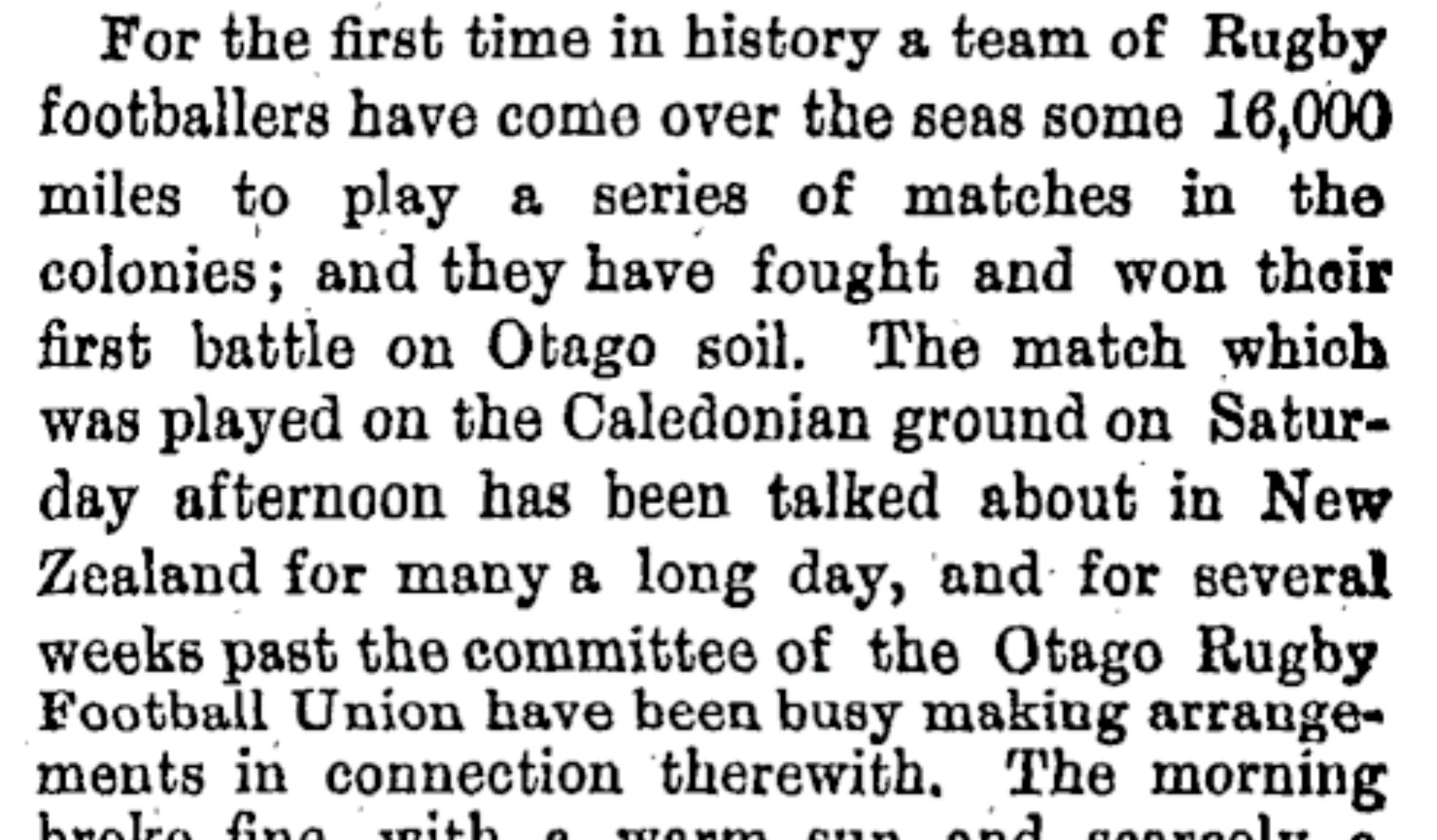 The first rugby tourists from the northern hemisphere arrived in April 1888 in New Zealand.

And contemporary reports make it abundantly clear that these home nations stars set the template for the Lions tours we know and love today.

The game has come on leaps and bounds in the last 128 years, of that there can be no doubt.

But much of what the Lions stand for has stood the test of time, going all the way back to their first-ever match against Otago on April 28.

The best of the best

The Lions have always come together to represent the best of the best while also honouring the core traditions of friendship, discipline, respect and integrity.

And if the Otago Witness report from that famous April day at the Caledonian Road ground in Dunedin is anything to go by, then the 1888 generation set a golden standard.

“The greatest football match that has ever been contested on New Zealand soil,” they wrote in their May 4 edition.

When any Lions tour arrives on foreign soil they immediately attract much attention, both on and off the field, and in 1888 this was no different.

The match had been talked up ever since the SS Kaikoura had docked at Port Chalmers five days earlier. And the hubbub was only growing on matchday – as the Witness remembers:

“As early as 2 o’clock it was evident in town that something unusual was going to take place for the sidewalks were thronged with pedestrians, all going in the one direction – southward; while a large crowd assembled in front of the Grand Hotel to see the Englishmen embark.”

So far so similar to the Lions tours of today, you might be thinking.

But when the players got out on the pitch it becomes clear just how much the game has changed.

Firstly the physical size of the players on show was remarkable compared to the modern game – the average weight of a Lions forward for that opening game was a shade under 76kg.

Compare that to the Lions Test side that lined up for the third Test against Australia in 2013 that averaged out at a whopping 117kg per man!

There was also their attire to consider – not yet synonymous with the famous red jersey – these Lions were clad in red, white and blue.

Their warm-up constituted of a little preliminary chucking of the ball before they at once adopted passing tactics for which they were praised so highly.

As the Mataura Ensign reports: “The play…in this respect was a treat to witness and nothing like it has ever been seen in Dunedin before.”

Once the game itself got underway it is easy enough to follow from the coverage – even if terminology has changed somewhat.

It was Otago that took the lead through a drop goal although not quite in conventional means!

“(Simpson) took a speculating kick at the ball as it was bounding along, and, greatly to the astonishment of everyone, it went flying over the bar between the posts.

“It was an astonishing piece of play, such as one might not see in a lifetime, and the Otago supporters could hardly realise that their men had scored.”

The Lions fought back with two tries – although as they were only worth one point at the time they still trailed 3-2.

The Lions fight back

Harry Speakman’s two, more conventional drop goals, turned the tide in the Lions’ favour but there are bizarre moments in the game that stand out.

Few men from today’s scrum would end up playing on the wing in the second half, as was the case for two of Otago’s pack in 1888.

“As the Otago men now had to play against the wind,” remembers the Witness. “Skipper Morrison deemed it necessary to take two of his men out of the scrum and play them on the wing, evidently for the purpose of being the better able to frustrate the attempts of the opposing backs.”

More bizarre, even to the New Zealanders, was to come as Rochdale’s Johnny Nolan decided on a rather unusual way of dealing with an Otago kick-off:

“Nolan was the man on whom the responsibility fell; but he was in great danger of being tackled before he could make his mark, so instead of catching the ball with his hands he jumped into the air, and meeting it with his head sent it flying down the field again – a cool, clever piece of play that was loudly applauded, but which has always been considered here as a ‘knock on’.”

In the end the final whistle blew to signal an 8-3 victory for the tourists – one that the local press would not begrudge.

The New Zealand Herald called it “the fastest and hardest fought game ever seen in Otago.”

And while the ‘sea of red’ we all associate with the Lions support was not yet in evidence – the home nations certainly knew how to celebrate.

“The English reserve men and their supporters were jubilant. Waving hats and sticks frantically in the air, they cheered themselves hoarse…” as the Witness remembers.

A Lions tour is just as much about what happens after the game as on it, and the mutual respect was in full swing.

The players were “heartily congratulated on their victory by friends and foes alike, no-one grudged them their hard earned laurels after having come 16,000 miles over the ocean to play in New Zealand. ”

There was little that occurred to mar the harmony and good feeling between the two teams.  And with a banquet to follow and after-dinner speakers – the celebrations went long into the night and set the tone for a wildly successful inaugural tour that would only come to an end in November when the players finally docked back in England.

England Ireland New Zealand News Scotland Wales
Previous story The First Match: The 1888 Tour gets underway
Next story Five things to watch out for this weekend