One of the most special elements of a British and Lions tour is the way four Unions come together as one to celebrate rugby. [more] 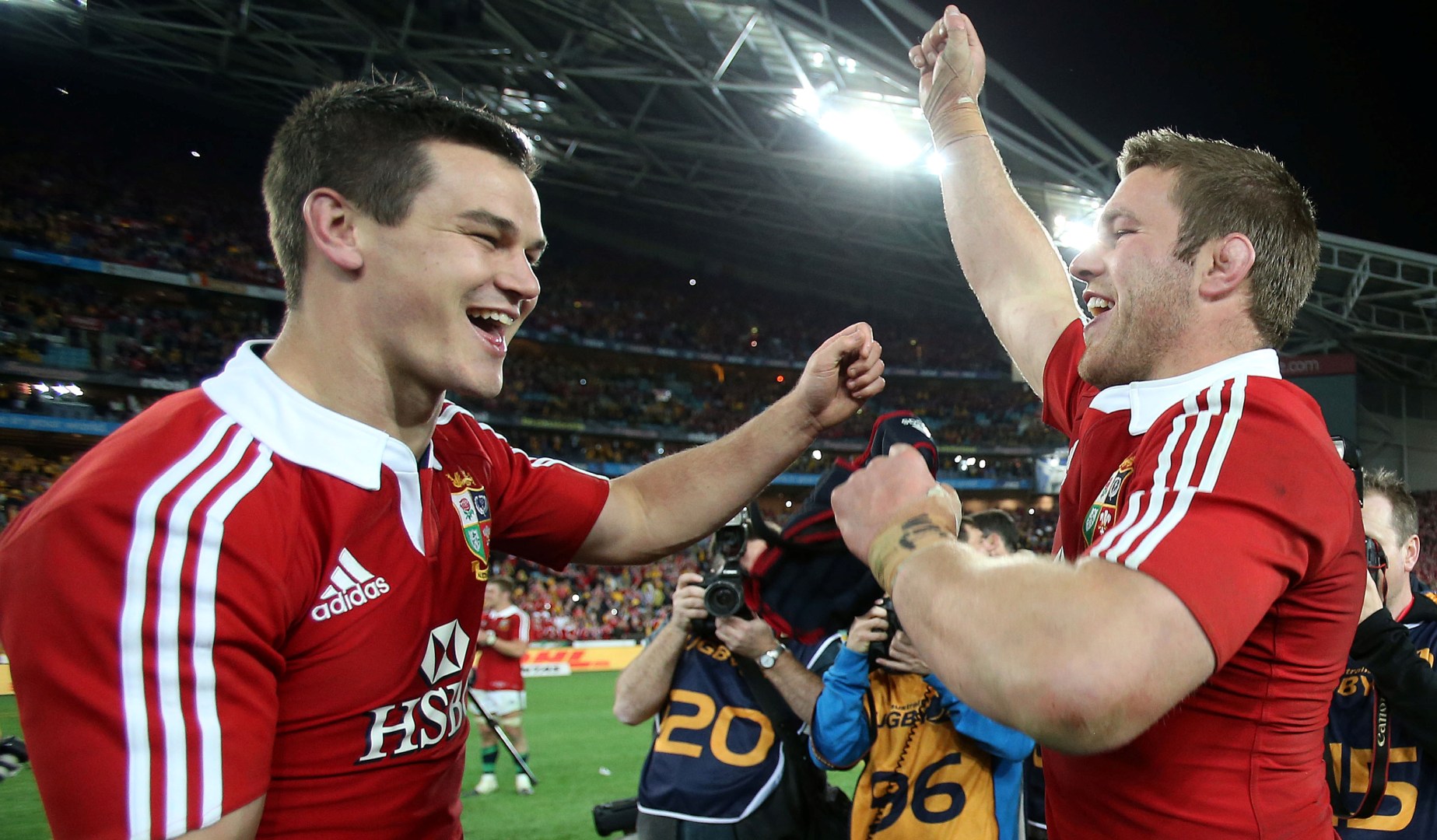 One of the most special elements of a British and Lions tour is the way four Unions come together as one to celebrate rugby.

And on Saturday evening, the whole of Europe will do the same to toast a love of music – at the Eurovision song contest in Stockholm.

Much like sport, and specifically rugby, music can provoke powerful emotions within us – triumph, despair, respect, determination, and so on.

But rugby and music are intrinsically linked, more so than just in the singing of the national anthems before a Test match, and no more is that the case than on a Lions tour.

From John Taylor’s creative arrangement of Sloop John B to the latest group belting out Bread of Heaven on the streets of Sydney, music will always be a key part of Lions folklore.

Music and the Lions have gone hand in hand from the beginning with choirs and singing a feature of almost every tour history – here are a selection of moments then Lions tours hit starting with of 1971.

The 1971 squad will always go down as legends for becoming the first Lions side to date to win a Test series in New Zealand.

But they sealed that title with their rendition of their tour song at the BBC Sports Personality of the Year award ceremony the following Christmas, where they were also crowned Team of the Year.

Sloop John B, from the Beach Boys’ Pet Sounds album, soon became a regular fixture at rugby clubs up and down the home nations after John Taylor introduced it to the Lions squad.

He was appointed the tour’s ‘choirmaster’ by captain John Dawes, although the legendary centre cannot have imagined the impact that particular appointment would have.

“We decided to go for him because he was a bit of a troublemaker,” Dawes remembers.

“He could be stroppy at times – that was the English coming out in him! He introduced this song Sloop John B.

“None of us had heard of it. It didn't really take off at first. Then Arthur Lewis, John Spencer, David Duckham and Bob Hiller decided to add 'boom, boom, booms' to try to drown out the song and wind John up.

“You'd think he would just pull his hair out – and he had a lot of hair in those days, but the clever so-and-so said, ‘We'll put it all together.’ And it worked.”

That was not the only music that played its part in the Lions’ success that tour, as Gareth Edwards remembers the side breaking into song as they overlooked Athletic Park in Wellington from a brow of a hill before the all-important third test – which the Lions went on to win 13-3.

“The Lions were singing We Shall Overcome,” he said. “I've sung this on numerous tours all over the world. But for the first time I felt that everybody meant it.”

The 1974 Lions also left behind a musical legacy, one which rings around BT Murrayfield every single time Scotland take to the field.

On a tour in which they were dubbed ‘The Invincibles’, winning 21 of their 22 matches and drawing the other in South Africa, the side bonded while travelling by singing songs – even refusing to get off the tour bus until they had finished on one occasion!

Everyone was made to room with someone from a different country, and it was Scot winger Billy Steele who encouraged his team-mates to sing ‘Flower of Scotland’.

Steele himself recalls: “I’ve always been a big fan of folk music – The Corries, The Dubliners and so on.

“We changed the line about ‘Proud Edward’s army’ to ‘the Springbok army’. I roomed with Bobby Windsor on one occasion and he had the song stuck in his head.

“He kept waking me up to ask what the next line was. He woke me up about six times!

“Before the second Test we were singing on the bus on the way to the stadium, but we had only finished the first verse and the officials came on trying to get us off the coach.

“But nobody moved until we had finished, and when we finally walked off the coach and through the crowd we felt ten feet tall.

“Willie John said afterwards he realised at that point that there was no way we were going to lose.”

1977: Singalong with the Lions

The 1977 tour group may have not been able to match up to the success stories of the previous two tours, but they do remain the only touring side to date to have recorded their own album.

Led by choirmaster Gordon Brown, the ‘Singalong with the Lions’ album was recorded at the Waitangi Hotel in New Zealand.

The series of traditional pop and folk songs include ‘You Are My Sunshine’, ‘Take Me Home Country Roads’, ‘House of the Rising Sun’, and ‘Summer Holiday’.

We’re not sure how much of an impact the album had on the charts, but it remains a No.1 hit for the Lions faithful.

A new Lions anthem for a new generation, Oasis 1996 smash hit ‘Wonderwall’ became the song for the victorious 1997 tour to South Africa.

An astounding rearguard action in the face of massive Springboks pressure saw McGeechan’s Lions clinch the three-match series with a game to spare – Jeremy Guscott slotting the decisive drop-goal in an 18-15 second Test triumph.

The scenes in the aftermath when Martin Johnson’s side realised they had made history were among the most special in Lions history, but video footage of the dressing room after the game had the most lasting impact on Lions fans.

Matt Dawson, Mike Catt and Austin Healey led the side as they roared out ‘Wonderwall’ in the dressing room after the game, and the song instantly became a Lions classic – so much so that it was belted out in Sydney on their next series victory in 2013.

Who can forget Brian O’Driscoll’s mesmeric try in 2001’s opening test against Australia, but the musical accompaniment that followed was almost as good.

Taking a pass from Jonny Wilkinson, the legendary Ireland centre scythed through the Wallabies’ defence just moments into the second half and outpaced the remaining defenders to touch down in a famous 29-13 win.

It was one of the best tries in Lions history and silenced the Gabba, while in their ecstasy the Lions fans took the opportunity to hijack Australia’s unofficial anthem – all in good fun of course!

'Waltzing Matilda' became 'Waltzing O'Driscoll' in honour of the Brisbane hero, and O’Driscoll remembers the try as one of the best of his career.

“I love the try that I scored against the Australians,” he said. “They were reigning world champions at the time and they had an incredible defensive record so it was great to score from 40 yards out.”

Of course no Lions past or present have ever actually participated in the Eurovision, but England prop Matt Stevens has probably come the closest.

The Toulon star – formerly of the Sharks, Saracens and Bath – came second in 2006’s X Factor ‘Battle of the Stars’ competition.

Edged out by Eastenders star Lucy Benjamin, Stevens’ renditions of ‘Mack the Knife’ and ‘Don’t Want to Miss a Thing’ earned him a whole new legion of fans from in and outside of rugby.

A champion pie-eater with a Politics and Economics degree from the University of Bath, Stevens is clearly a man of many talents – but his crowning achievement was two tours for the Lions where he made 12 appearances in total in the famous red jersey.

Sam Warburton, skipper of 2013’s Lions side in Australia, remembers the likes of Sean O’Brien joining forces with Stevens to sing the side to victory Down Under.

‘Wonderwall’ remained a staple amongst the Lions’ repertoire, but Mumford and Sons’ ‘Little Lion Man’ became the unofficial song of that particular tour.

Stevens was in charge of the music committee, but O’Brien’s Irish songs kept the team entertained for hours on the long bus journey between Newcastle and Sydney – and he led the celebrations after the third test in Sydney’s Cock’n Bull with a rendition of Mumford’s ‘I Will Wait’.

Coupled with the rap battle between Alex Corbisiero and Simon Zebo, as well as the rendition of ‘Bread of Heaven by Jonathan Sexton and Leigh Halfpenny on the Sydney streets, 2013 was a tour where music was at the forefront.

News
Previous story Five things to watch out for this weekend
Next story On this Day: The 1974 Invincibles get up and running