On This Day: Telfer’s speech and Dawson’s dummy down the Springboks 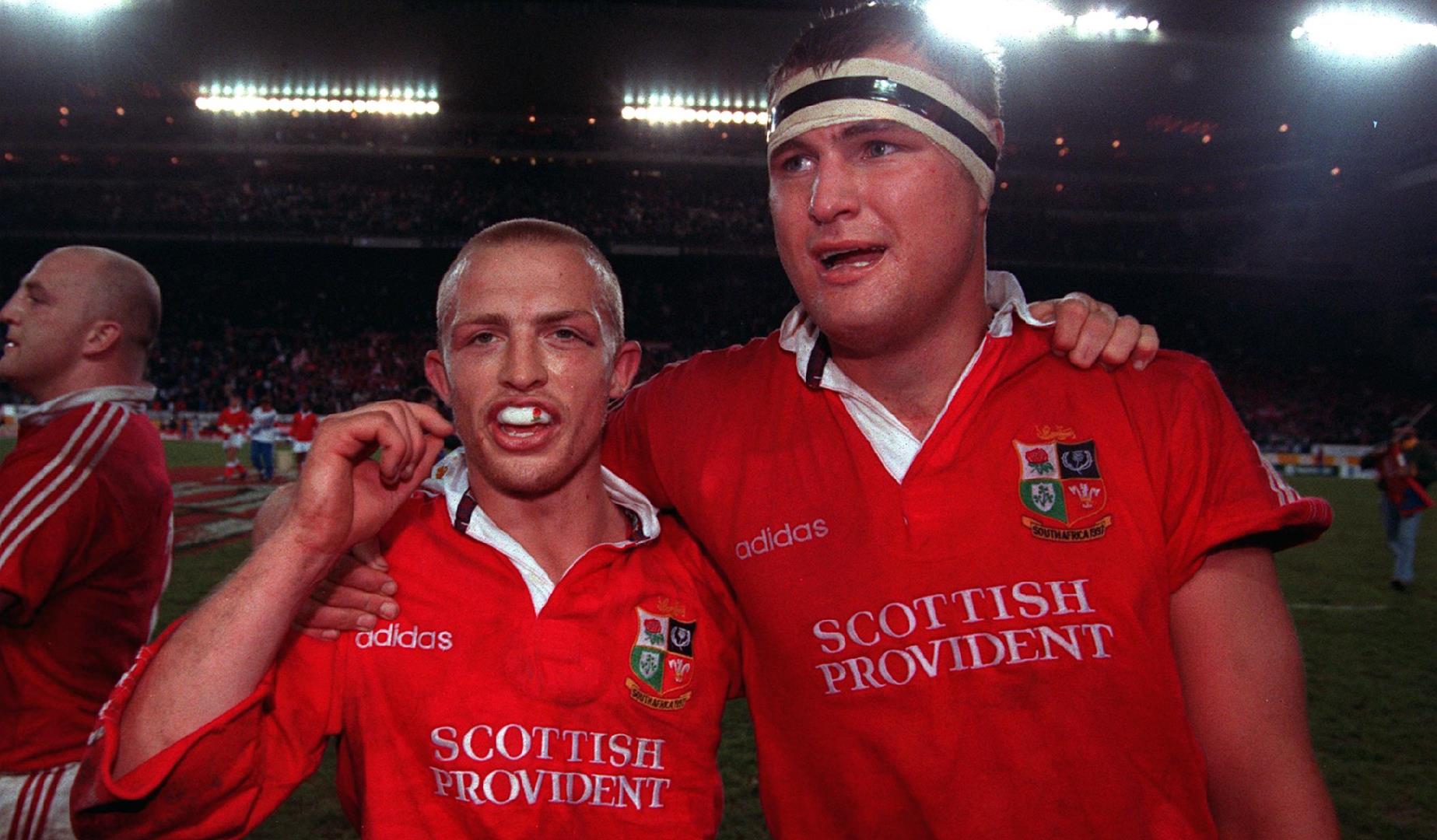 After months upon months of preparation, all it takes is one split second of inspiration or ingenuity to make or break a British & Irish Lions Tour.

“I was doing that to get myself out of a hole, not because I was trying to trick the opposition."

After months upon months of preparation, all it takes is one split second of inspiration or ingenuity to make or break a British & Irish Lions Tour.

And there is no finer example of that than what happened 19 years ago to this very day – a move enshrined in Lions canon as simply ‘the Dummy’.

Amid all the established icons present on the 1997 Tour to South Africa – Martin Johnson, Neil Jenkins et al – Matt Dawson, ostensibly the third-choice scrum-half before a ball had been kicked, was hardly the name on everyone’s lips.

He had not played a Test match for England in 15 months due to competition from a strong cluster of Red Rose No.9s that included fellow 1997 Lion Austin Healey, while Wales wizard Rob Howley was the presumptive starter against the Springboks.

But after Howley dislocated his shoulder in a warm-up match against Natal, a lively cameo from Dawson convinced Sir Ian McGeechan and his coaching staff to place the responsibility on the 24-year-old’s shoulders.

And it was a twist of fate that Dawson believes caught South Africa completely unawares.

“It was always going to be close between myself and Austin as to who started on the bench,” recalled Dawson.

“It was obvious Rob Howley was going to be first choice but the coaches had a decision to make on who they were going to put on the bench.

“Austin’s versatility and probably my goal kicking, as well as the scrum-half play, was going to be a factor.

“But I happened to be on the bench for the Natal game when Rob came off and I had a good game, that probably cemented my selection at the time.

“In a way, as much as I’d like to still think that the Lions would have won that series if Rob Howley was playing – because he was such a world class player – I’m still convinced that the South Africans didn’t really do any homework on me.

“They thought ‘Rob Howley’s out, that’s a relief, we don’t need to worry about the scrum halves’ and they sort of took their eye off the ball a little bit.”

Only the forwards were present in the meeting room for Jim Telfer’s pre-match speech – the Everest speech as it has now become known in popular parlance.

But Dawson admits the influence of Telfer’s words stretched far beyond the pack who were present for the forwards coach's perfectly-prepared piece.

“There was a forwards meeting and a backs meeting,” he said.

“The backs probably played a bit of pool and darts. As we walked past the meeting room, we could see Jim setting it all up, wandering and pacing around the room, rehearsing his lines and knowing what he needed to do.

“Even then I don’t think we fully understood the power of that speech until you sort of watch the video or you’re with the boys afterwards.

“Certainly both Geech and Jim, one of their great strengths was being able to make you realise where you could put your mind and how influential your mind was in performance because we weren’t big enough or strong enough compared to South Africa but we had an amazing game plan.

“The time, the effort, the energy and analysis that we went into was extremely professional and beyond where he had ever been before, so we knew we had an advantage.”

Despite what was to come, Dawson approached the first Test at Newlands with the precision of a well-drilled soldier told to hold fort rather than break opposition lines.

And for the first 70 minutes of the Test match the Lions rookie was preoccupied with shackling his opposite number, Joost van der Westhuizen,  who had lifted the World Cup two years prior.

“You were just tackling, you knew you were going to be doing a lot of defence and a lot of tackling, a lot of organisation, sticking to the game plan,” he added.

“My role was just to do the things that I practiced. Get the ball away, organise. I remember doing so much organisation, talking and organising around the fringes, man marking Joost.

“That was probably the most mentally taxing game that I’ve ever played before. And then when you run out and hear the noise of the crowd, feel the intensity that the South Africans brought, you knew that if the South Africans got near the line, they were probably going to score points.

“So even getting in our 22, you often get flashbacks to how difficult that was to get out of your own 22.”

A bruising encounter was tilted ever so slightly towards the Springboks at 16-15 and No.8 Tim Rodber had been the main Lions battering ram off the base of a fiercely-contested scrum.

Ultimately, an off-the-cuff suggestion from Rodber – Dawson’s clubmate at Northampton Saints – to change it up was the unlikely catalyst for the events to unfold.

“We knew that we were under extreme pressure in the scrums and parity was going to be our friend,” said Dawson. “Paul Wallace was shooting his way through the game brilliantly and single-handedly but how he managed to manipulate the opposition so well there was magnificent.

“So really it was just about getting the ball onto Keith Wood, getting it into Tim Rodber’s hands and he was up and away straight away.

“It wasn’t really until Tim had been smashed so many times that he turned around and said ‘listen Matt, why don’t you just have a go, just change the point of attack slightly, maybe use my pace off the base’ and really it was very instinctive.”

Regardless of how the decision was reached, the execution won Dawson a doctorate in the art of deception.

He switched from nursing the ball with his left boot to arcing up the Newlands touchline in the blink of an eye – a transition certainly too quick for an outstretched van der Westhuizen.

Four chasing Springboks, almost as if they could not quite believe his boldness, then froze for just a moment as Dawson pretended to lob the ball back to Ieuan Evans.

Everyone bought it and Dawson ran across the try-line virtually unopposed – not that the man himself would describe it as genius.

“My face from the end on camera of running into the corner is just eyes wide open at the thought they had just fallen for that,” he admitted.

“I remember saying it felt like a little bit like a school boy dummy – as if you were throwing a dummy to the touchline and they still fell for it – but all of the things just aligned at that one time.

“You can’t ever allow for however many South Africans just sort of stopped in their tracks. They wanted to mark Ieuan Evans. It was just one of those split second moments where you know they have gone for it and there was disbelief from me really.”

A further try from Scotland wing Alan Tait sealed a 25-16 victory for the Lions and set up a famous series victory that, pre-tour, many had thought improbable against the world champions.

But according to Dawson, that sentiment only helped foster a siege mentality which proved vital to the tourists’ cause.

“The strength of the squad was the fact that we knew that everybody outside of the squad and the management and family, thought that we were going to get battered,” said Dawson. “Not only in the Test matches but in the midweek games as well.

“We had a steely belief within that squad throughout the whole period.”

“This is your f***ing Everest, boys. Very few ever get a chance in rugby terms to get for the top of Everest. You have the chance today.

“Being picked is the easy bit. To win for the Lions in a Test match is the ultimate, but you’ll not do it unless you put your bodies on the line. Every one Jack of you for 80 minutes. Defeat doesn’t worry me. I’ve had it often and so have you. It’s performance that matters.

“If you put in the performance, you’ll get what you deserve. No luck attached to it. If you don’t put it in, then we’re second-raters.

“They don’t respect you. They don’t rate you. The only way to be rated is to stick one on them, to get right up in their faces and turn them back, knock them back. Outdo what they do. Outjump them, outscrum them, outruck them, outdrive them, outtackle them, until they’re f***ing sick of you.

“Remember the pledges you made. Remember how you depend on each other at every phase, teams within teams, scrums, lineouts, ruck ball, tackles.

“They are better than you’ve played against so far. They are better individually or they wouldn’t be there. So it’s an awesome task you have and it will only be done if everybody commits themselves now.

“You are privileged. You are the chosen few. Many are considered but few are chosen. They don’t think f*** all of us. Nothing. We’re here just to make up the f***ing numbers.

“No one’s going to do it for you. You have to find your own solace — your own drive, your own ambition, your own inner strength, because the moment’s arriving for the greatest game of your f***ing life.”