On This Day: North stars in the 2013 Lions first Test success 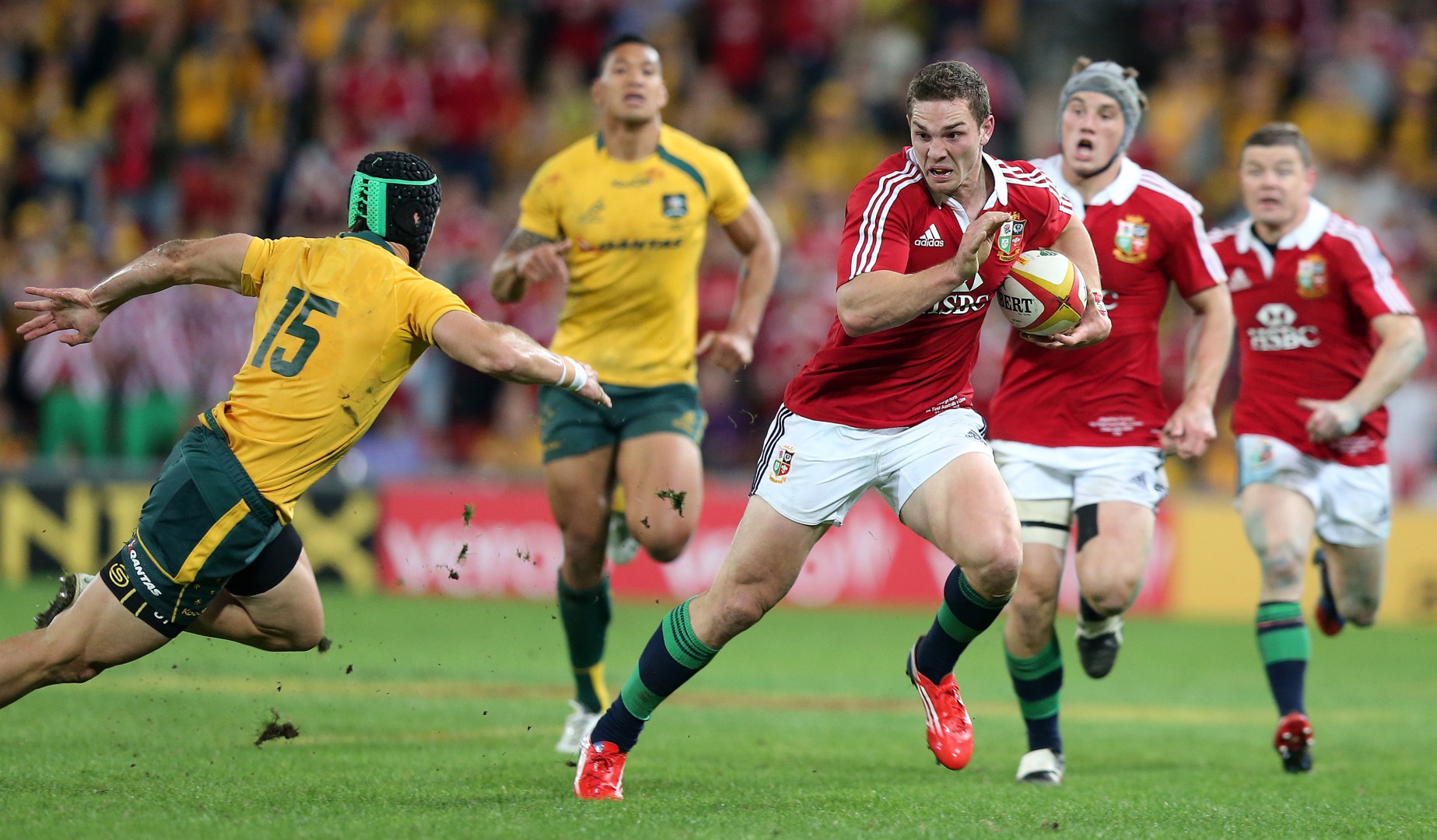 Israel Folau scored a magnificent double on his Wallaby debut while Leigh Halfpenny and Kurtley Beale enjoyed contrasting days from the kicking tee.

"I was pretty chuffed with my try in my first Lions Test.”

Israel Folau scored a magnificent double on his Wallaby debut while Leigh Halfpenny and Kurtley Beale enjoyed contrasting days from the kicking tee.

But if there is one moment that stands out above all the others from The British & Irish Lions historic first Test win over Australia three years ago – then it is surely George North’s supreme solo score.

Much like the man who had worn the Lions No.11 jersey 12 years previously in the same city – Jason Robinson – a moment of individual brilliance brought this game to life.

North’s first-half score will forever go down in Lions legend but it could have all been so different. Here we take a look back at an outstanding first Test of that historic tour.

The Lions had not won a Test series in 16 years before arriving Down Under but from the outset many thought they had a strong chance against Robbie Deans’ Wallabies.

Their first five warm-up games had all ended in victory – including an impressive 47-17 win over the Waratahs with what looked like the bulk of Warren Gatland’s Test side in place.

But in midweek before the first Test the Lions had come undone against the Brumbies and lost some of their momentum.

Throw in some injury concerns – North was recovering from a hamstring injury sustained earlier in the tour, Jamie Roberts had already been ruled out as had two loosehead props in Cian Healy and Gethin Jenkins and the Test was tough to call.

So when Gatland named his starting XV – made up of eight Welshmen, four Irishmen and three Englishmen – Lions fans breathed a sigh of relief to see North included.

Alex Corbisiero – who would go on to write his name in history in Sydney’s decisive third Test – had joined the tour as injury cover and went straight into the starting XV.

Tom Youngs got the nod over Richard Hibbard at hooker to join Corbisiero and Adam Jones in the front row.

Alun Wyn Jones and Paul O’Connell were the locks while Tom Croft and No.8 Jamie Heaslip joined skipper Sam Warburton in the back row to complete the pack.

Behind the scrum Mike Phillips and Jonathan Sexton were the half-back pairing while in the absence of Roberts it was Jonathan Davies and Brian O’Driscoll who were picked together in midfield.

An all-Welsh back three of North, Alex Cuthbert and man-of-the-series Leigh Halfpenny rounded out a star-studded XV with plenty of firepower on a bench that included five Englishmen.

From the Wallaby point of view much of the build-up focused on Deans’ inclusion of league-convert Israel Folau on the wing while James O’Connor was handed the No.10 shirt.

Also in the back line Christian Leali’ifano was given his Test debut at inside centre while up front James Horwill captained a pack that had been robbed of both George Smith and David Pocock through injury – although Michael Hooper was a pretty handy deputy on the openside.

The first incident of note in a frenzied atmosphere at Suncorp Stadium – in front of 52,499 fans – saw Leali’ifano’s debut end before it had really begun, knocked out on his first encounter with Davies.

O’Connor had missed a couple of early testing kicks at goal before the Wallabies drew first blood with a breath-taking counter-attack.

Having absorbed countless phases of pressure in their own 22, referee Chris Pollock awarded a relieving penalty but rather than clear their lines, Will Genia tapped and went.

And having tied his opposite man Phillips in knots, his clever kick to the right wing hit Folau in stride and the debutant made the pick-up look easy before dotting down under the posts for the first Test try of the series – a magnificent end-to-end counter attack.

Halfpenny’s metronomic right boot reduced arrears to 7-3 in the 23rd minute and moments later the Lions fans got their first real chance to roar.

A wayward clearing kick from Wallaby full-back Berrick Barnes went straight down North’s throat on the left wing but having caught the ball inside his own half – few could have predicted what would come next.

The winger collected the ball in stride and had already built up a head of steam by the time the Wallabies chase had met him.

In the blink of an eye he had broken through Pat McCabe’s first-up tackle, left James O’Connor grasping at thin air and was motoring towards Barnes.

A stutter step took him in and then away from the full-back and with the Sea of Red in full voice he beat Genia in a foot race to the left corner for an iconic Lions score.

Halfpenny’s touchline conversion and a subsequent penalty both went over and the Lions were heading to half-time with what looked like a 13-7 lead.

“My thoughts after I caught the high kick for my try was ‘just run’ and luckily I saw a gap which opened up and it was then a case of stepping and trying to finish it off,” recalled North after the game.

He was denied a second try by the TMO before Folau produced his second moment of magic.

North added: “I thought that second one was a try but it goes to the TMO and he said it wasn’t so that’s it. I was pretty chuffed with my try in my first Lions Test.”

In the 34th minute the Wallabies had cleverly worked an overlap down the right but Folau looked like he was well-marshalled with plenty to do.

However, with one sidestep he left both Halfpenny and Sexton snatching at air and had breezed over for his second try on debut.

O’Connor’s conversion was off target and at the break the Lions held a narrow 13-12 lead but Folau had marked himself out as man for the big stage.

"I've got to say it's on another level [to State of Origin], with the fans the Lions bring over, they're very passionate and there's a lot of noise throughout the game,” said the former rugby league and AFL star.

"It's great. The main thing for me is that I'm really enjoying [Rugby Union] and hopefully the next few weeks, we'll see how we go."

The injuries were racking up for the Wallabies – by now Hooper had been seconded to the centres and that midfield confusion set up the Lions second try.

Cuthbert came off his right wing to find a gaping hole from Sexton’s fine pass and before the Wallabies could scramble the Welshman was under the posts, 20-12 and the Lions were looking strong.

But an injured Wallaby is a dangerous one and slowly but surely they edged their way back into it.
As Brian O’Driscoll recalled in his Daily Telegraph column:

“We had a good position on the scoreboard yet came within a missed kick of losing. Australia always find a way. Always. They are so hard to shake off.

“They are riddled with injuries and they still manage to stay in.”

Replacement Beale’s inspiration with ball in hand and from the tee had closed the gap to a meagre two points as only one Halfpenny penalty was keeping them at bay.

In the final moments Beale, once and then twice, slipped with victory in his sights for the Wallabies.  Both times his potential match-winning kicks go wide and the Lions breathe again, taking a 1-0 lead in the series with a 23-21 victory.

“It is a difficult position to be in and I wouldn’t have liked to have had to kick that one,” said North about the inconsolable Beale after the final whistle.

The team that won first Test in the Lions’ previous two tours Down Under in 1989 and 2001 ended up losing the series.

O’Driscoll was the only survivor from that 2001 tour and he knew the job was only half complete.

“They missed 14 points in kicks, so deduct a two-point margin of victory for us, that is a 12-pointer for them. They will latch on to that and so should we. There will be no complacency going to Melbourne. No, no chance of that,” he added.

“You know Australia  are going to be a lot better second time around. They will not allow any thought of us leaving Melbourne with a 2-0 series in the bag. They are not made up that way. They will be mad for it. We have to match that.”

In order to get his point across the Ireland legend – on his fourth Lions tour – is photographed after the game exhorting his teammates in the huddle to not over-celebrate but prepare for next week.

That was only O’Driscoll’s second Test win as a Lion in four series but the point is rammed home and a debutant like North heard him loud and clear.

“We spoke afterwards about the need to play better next weekend and while it is great to get a first win in the series it is going to get tougher,” says the winger.

“Hopefully, we can ramp it up and we know that wasn’t our best performance.”