Is there a more iconic position than second-row? To read through the roll-call of Lions Test locks is to encounter a who's who of talismanic leaders. Martin Johnson, Gordon Brown, Paul O'Connell, Alun Wyn Jones and chief among them, Willie John McBride. [more] 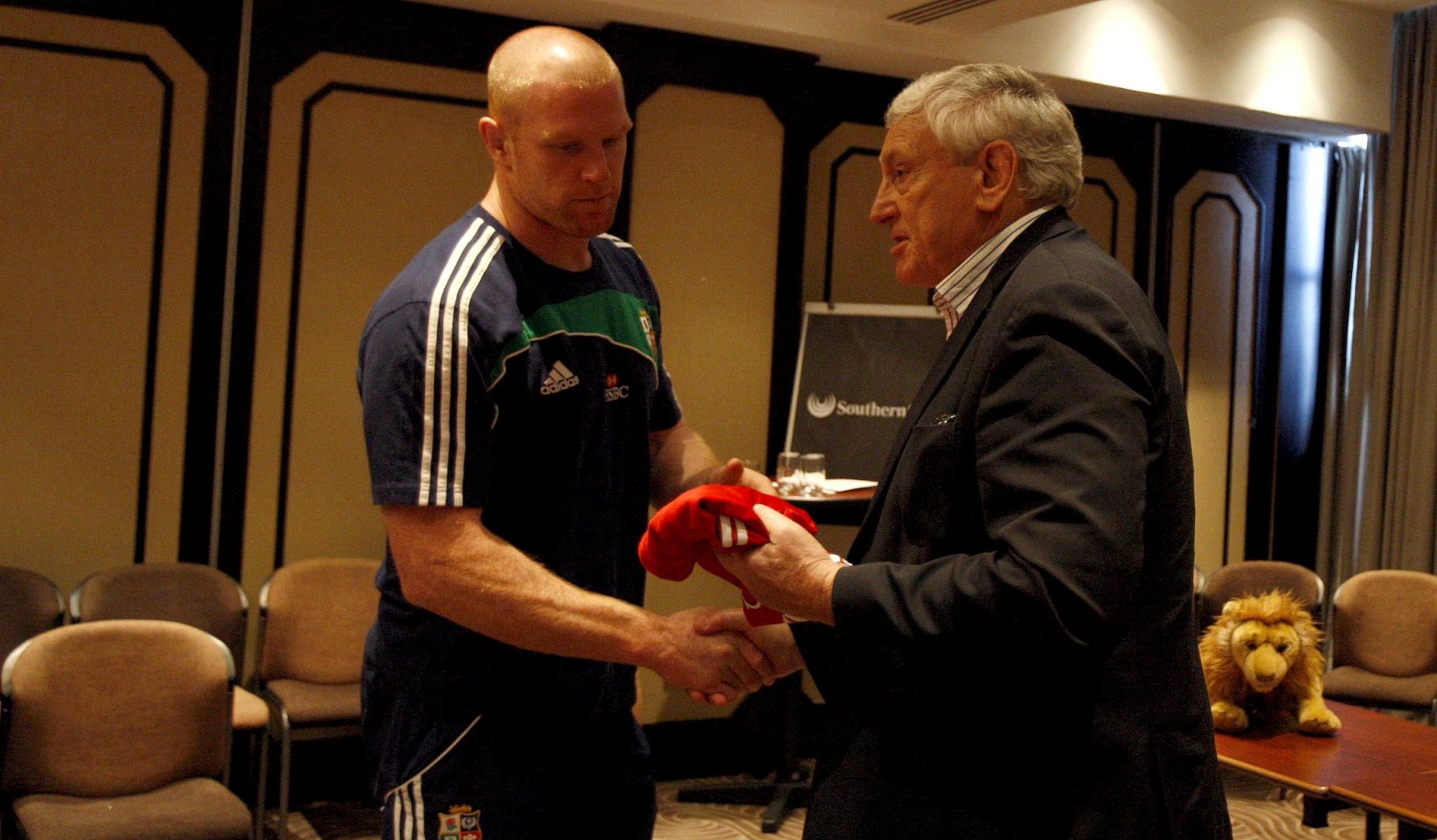 Is there a more iconic position than second-row? To read through the roll-call of Lions Test locks is to encounter a who’s who of talismanic leaders. Martin Johnson, Gordon Brown, Paul O’Connell, Alun Wyn Jones and chief among them, Willie John McBride.

Simon Shaw at Loftus Versfeld in 2009, Johnson at Kings Park in 1997, some of the most memorable Lions performances have come in the four and five shirts, but how and why has one position come to take such a revered place in Lions and rugby folklore?

It certainly is not for their try-scoring ability. No lock forward has ever scored a Test hat-trick and only Ireland and Malone’s Jimmy Nelson has scored two tries in a Test match, against Australia at the Sydney Cricket Ground in 1960 as the Lions won 24-3.

Nor is it for their metronomic place-kicking, only one Lion was scored points from the hoof since 1930 and that was Welsh lock Allan Martin, who kicked two penalties when the Lions beat Southland 20-12 in 1977.

Yet the giants in the engine room possess an aura that sets them apart as leaders, it is by far the most popular position for a Lions captain. Over 100 Lions matches have been skippered from lock, including 30 of 110 Tests.

Lock is one of the few positions to have remained almost entirely unchanged throughout rugby union’s storied history.

The major change arrived in the aftermath of the 1995 Rugby World Cup and the dawn of professionalism when, for the first time, lifting in the line-out was allowed. Though it was initially deemed that ‘supporting’ was to be permitted, ‘lifting’ proper was introduced for the 1995/96 season.

Though the line-out has been the second-row’s meat and drink since time began, the relatively chaotic spectacle of lifting-less line-outs are a far cry from the finely-tuned, scientifically precise machines we witnessed in Australia in 2013. The gap between lines so diligently maintained by modern referees was less no man’s land and more free-for-all back in the amateur era.

A new athleticism has developed in the modern day second-row. Alun Wyn Jones and Richie Gray know well the open-spaces perhaps more alien to Wade Dooley and Rhys Williams, but what has not changed is their unadulterated size. In a game played by giants, locks are the biggest of them all.

The tallest locks, and players, ever to play for the Lions are Martin Bayfield and Gray, both of whom stand six foot ten. Johnson stands at six foot seven, Shaw and Wade ‘The Blackpool Tower’ Dooley both measure six foot eight.

There are a few exceptions. The shortest lock ever to play for the Lions was Tom Clifford, at just five foot nine he played in the Lions 27-8 win against South Canterbury in 1950, while Roy John who also travelled to New Zealand that year weighed just 13 stone seven pounds – that is over six stone less than Gray, who at 20 stone is the Lions heaviest ever lock.

And before we pick out a few individuals below – we must make references to Robert Blair Mayne – or ‘Paddy’ as he was known. The wild Irishman who was a stand-out lock on the Lions 1938 tour to South Africa and then went on to have a distinguished military career in the Second World War – winning a DSO and Three Bars as a founding member of the Special Air Service.

Lions history is bursting with legendary second-rows and if you were to ask arguably the greatest to play against the Lions, Colin Meads, he would tell you without hesitation that his toughest opponent was Rhys Haydn Williams.

Former Welsh captain Williams played ten Lions Tests across the 1955 and 1959 tours, his finest hour coming opposite ‘Pinetree’ in 1959 when he famously pinched six consecutive line-outs to prevent an All Blacks’ rearguard action from taking hold in a 9-6 Test triumph in Wellington.

Such was the extent of his excellence, the fervently patriotic New Zealand media acknowledged that if he had been born in the Land of the Long White Cloud, he would have been an All Black.

The New Zealand Rugby Almanac of 1960 voted him one of their five 'Players of the Year' for the previous season, saying: “He was the outstanding forward of the Lions side. Had he been a New Zealander he could well have gained selection as an All Black. He had as much energy at the end of the tour after 17 appearances as he did at the start.'”

Indeed, he had such a profound impact during that fourth and final 1959 Test, the Kiwis invited Williams to their private post-match function and honoured him with the greatest accolade the rugby-mad nation can bestow – an All Blacks jersey.

A lock by trade, Mike Campbell-Lamerton was also a Test No.8 for the Lions, but the truly miraculous thing is how he even made it onto the pitch.

Colonel Campbell-Lamerton made it through bloody fighting in the Korean War to captain Scotland and the Lions.

At the age of 15 he was struck in the chest by a javelin, stopped only by a resilient rib. In Korea, he stood on a mine, but remained immobile until a corporal, a former bomb disposal expert, was able to diffuse it beneath him.

He also fell 60 feet from a helicopter in Cyprus damaging his hips, back and legs and somehow recovered to excel for both Scotland and the Lions.

Once nicknamed "Michael L'Abominable" by a French newspaper, Campbell-Lamerton epitomised the self-sacrificing nature of Lions captains when in 1966 he dropped himself after a run of poor form, ending his own career for the good of the team.

Willie John McBride, five-times tourist and leader of the most successful pride of the lot, the 1974 ‘Invincibles’.

The rough-hewn lock from Ballymena played 17 Lions Tests, and had to endure nine successive defeats before becoming a winning Lion. When the victories began to come, they did so with a giant McBride hand on the tiller: as pack leader in New Zealand in 1971 and as captain of the side that swept all before it in South Africa in 1974.

In New Zealand in 1971, those good times began to roll as McBride began to assume the leadership role in which he became so successful, taking charge of the pack when his countryman Ray McLoughlin suffered a broken thumb that ended his tour prematurely.

McBride was also to the fore when he led the Lions unbeaten through a 22-match programme in South Africa in 1974.

Wherever the Lions are known, Willie John remains the leader of the pride.

Indomitable Johnson will be remembered forever for his leadership, but when picked by McGeechan to skipper the side in South Africa in 1997 he was regarded as a gamble.

Johnson was not the English captain and he had very little captaincy experience, but against South Africa’s fearsome forwards, McGeechan wanted a leader who was unquestionably first-choice in his position, as well as someone ‘uncompromising and never troubled by thoughts of failure’.

Johnson fitted that bill and became the first Englishman since Bill Beaumont in 1980 to lead a Tour party. He remains the only man ever to captain a Lions series twice.

England’s World-Cup winning Captain won three of his six Tests as captain and also started for the Test side that beat New Zealand 20-7 in 1993.

His performance alongside Ireland’s Jeremy Davidson at the heart of the Lions pack in 1997 that clinched a historic Test series win against a heavily-fancied Springbok side will never be erased from Lions folklore.

Twelve years after Sir Ian McGeechan picked him to travel with the Lions to South Africa in 1997, a 36-year-old Simon Shaw was selected for his first Lions Test.

Shaw had played 17 games for the Lions without featuring in a Test team when McGeechan at last named the English veteran in his starting side to face the Springboks at Loftus Versfeld.

The former Wasps man responded with what is widely regarded as one of the finest Test performances in Lions history.

Then World Champions South Africa had been hailed for their physicality and McGeechan picked Shaw to counter Bakkies Botha and Victor Matfield in the Springbok engine-room and the Scotsman’s selection paid off spectacularly.

Shaw was a man possessed, carrying with the full might of his 20 stone frame and constantly causing the South Africans problems at the ruck. Though the Lions were to lose a heart-breaking Test 28-25, the Sunday Times’ Stephen Jones said of Shaw: “I consider to be the greatest performance by a forward in any match, ever.”

Changing Roles looks at the evolution of the game and the players who played it in Lions red from the earliest days of The British & Irish Lions to the present.

News
Previous story On This Day: Robinson roars and O’Driscoll waltzes for 2001 Lions
Next story On this day: Brave 1993 Lions go down in decisive Auckland Test