The preserve of the eccentric, and at times a little mad, full-back is a position apart - and through the years The British & Irish Lions have enjoyed more than their fair share of iconic players with 15 on their back. [more] 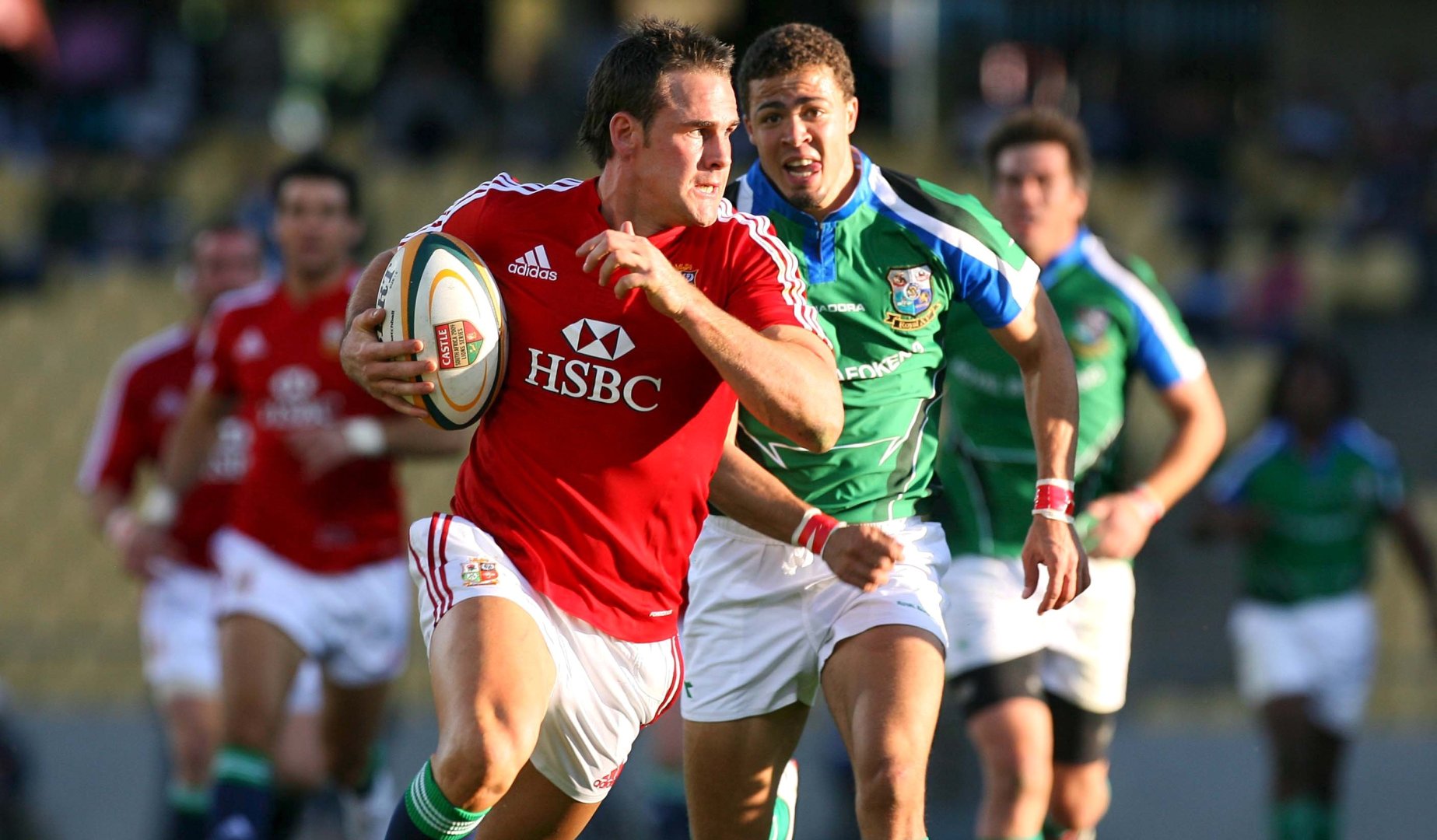 The preserve of the eccentric, and at times a little mad, full-back is a position apart – and through the years The British & Irish Lions have enjoyed more than their fair share of iconic players with 15 on their back.

Historically the last line of defence, the role of full-back has undergone a seismic shift in recent decades with dynamic players capable of joining the backline and launching counter-attacks increasingly preferred to the traditional No.15.

Of course defence is still the key element of effective full-back play; a No.15 must be able to pre-empt any gaps in the defensive line, anticipate the opposition’s play, and not get caught out of position as well as being almost flawless under the high ball.

But thanks to the 1968 law change restricting kicking the ball out on the full, the position of full-back was revolutionised through the likes of Lions legends JPR Williams and Andy Irvine as well as French legend Serge Blanco.

And 2009 tourist Lee Byrne agrees that priorities for today’s full-back have changed from those of the 1950s and 1960s.

“There is a lot less kicking from your full-back today, whereas before the No.15 would largely just stay in position and return the kick,” he explained.

“Now there’s a lot more running rugby involved and it’s good to have more of an all round set of weapons in your armoury.

“You need to be able to kick, run, catch and pass now, and more so than ever as first receiver you need to have a big passing game as well.

“It’s an all-round skill-set you need to have, but you still definitely need to be capable of making those last-ditch tackles as no-one sees the tackles that are missed in front of that.

“If you’re the last man you’ve got to make sure you are successful in the tackle every time, more so than anyone else, that is really important as well.

“A lot of the best full-backs can play in the centres and on the wing as well, that adds another string to your bow. Formerly a full-back would just be an out-and-out full-back and that was it, but now you are looking for more versatility when you are under pressure.”

In terms of the early years, perhaps no player better embodies what a full-back’s role used to be than Jack Bassett, the Welsh No.15 who played three Tests on the 1930 Tour to New Zealand and Australia, and was famed for his ferocious tackling.

Putting his body on the line, Bassett was very much the last line of defence for both Wales and the Lions and the epitome of the early full-back.

Since then the body shape has varied quite considerably, although over the years Lions full-backs have often been among the bigger backs on Tour, notably in the cases of JPR Williams in the 1970s, and Gavin Hastings 15 years later.

Here is a quick look at a few of the notable players who have shaped the full-back role for the Lions over the years.

Ireland have had their share of Lions full-backs down the years, including Rob Kearney, who featured alongside Byrne in 2009, but Tom Kiernan will be remembered as one of their greatest.

Originally from Munster, Kiernan toured with the Lions in 1962 to South Africa, before captaining the famous side six years later in the same country.

An accomplished goal-kicker, Kiernan scored 35 points in all over his Lions Test career – a record for a full-back until Hastings took that title 25 years on.

In a brilliant international career Kiernan eventually retired from playing in 1973 and at the time was Ireland’s leading points scorer, most capped player and most capped captain.

And his Lions influence would extend to nephew Mike, who represented both Ireland and then the Lions in 1983.

The most famous sideburns in international rugby, JPR Williams was a trailblazer for more than just his facial hair, helping to develop some of the key features of modern full-back play.

His ability to leap for the high ball was very much the exception in the 70s, whereas nowadays all full-backs are expected to be able to leap into the air and claim up-and-unders.

And that ability to turn defence into attack has been adopted not only by No.15s from the home nations but by full-backs the world over.

Williams was a key member of two of the greatest-ever Lions sides in 1971 and 1974 – scoring 28 points in his 30 matches, including the 45-yard drop-goal that clinched the 1971 series in the fourth Test.

Part of the great Welsh sides of the 1970s, he is also remembered for his exploits away from rugby, having won a British junior tennis tournament at Wimbledon in 1966 as well as working as being an orthopaedic surgeon.

With JPR established for the 1974 Tour to South Africa, Andy Irvine was used on the wing by Syd Millar, but given his exceptional pace, that was no problem for the Scot.

Even though he had only ever played at full-back for Scotland until that point, Irvine performed admirably in the role, and went onto tour twice more with the Lions.

In 1977 in New Zealand, with no JPR for competition, Irvine started at full-back in all four Tests, and he started three more in the position three years later in South Africa.

If early full-backs were known primarily for their defence, it was in attack that Irvine really made his name.

His 274 points in all games for the Lions remains a record, but as much as his goal-kicking was exceptional, it was Irvine’s ability to cause havoc in the backline which stood out.

And as is very much the case in the modern era, Irvine’s ability to switch comfortably between wing and full-back was evidence of a player who was ahead of his time.

Irvine’s main rival for the title of Scotland’s greatest full-back followed in his footsteps with the Lions.

Gavin Hastings was more of a traditional full-back, and not quite as blisteringly quick, but he was extremely complete, through both his rock-solid defence and incredible boot.

Selected to tour in both 1989, and then as skipper four years later, Hastings was a natural leader for both Scotland and the Lions.

An out-and-out full-back, he used his larger frame to great effect with ball in hand, while it also came in very useful in defence.

And with an ability to launch the ball miles with his powerful boot while under pressure, he was very much a reassuring presence at the back.

The wildcard on this list, Neil Jenkins was much better known as a fly-half, where he played 72 of 91 Tests, but from a Lions perspective he is best known for his exploits in the No.15 jersey.

One of the great tactical decisions by Sir Ian McGeechan, Jenkins was employed for his metronomic boot against the World Champion Springboks in 1997, but shifted to full-back to allow the more mercurial Gregor Townsend to play at fly-half.

It was a similar set-up to Wales in 1997, with Arwel Thomas having been used in the ten jersey, and Jenkins showed his worth with 41 points across the three Tests in the historic series victory.

On his return to Wales he would go onto play just two more games at full-back, switching back to his more familiar position for the remainder of his career.

And while his dalliance with the full-back position was virtually over, Jenkins’ relationship with the Lions continued, touring again in 2001 to Australia, before taking on a coaching role in 2009 and 2013.

The most recent Lions Test full-back is Leigh Halfpenny, player of the series in 2013 four years after a frustrating trip to South Africa.

A mix of old and new, Halfpenny follows in the footsteps of Irvine, Hastings and Jenkins as a goal-kicker, as well as being exceptional under the high ball.

A winger back in 2009 when injury restricted him to just one appearance on Tour, Halfpenny had made the move to full-back by 2013.

And it was on that Tour that one of the all-time great Lions battles took place, between Halfpenny and Wallaby counterpart Israel Folau, with the former’s 49 points proving crucial in the series win.

Byrne remembers that duel as one of the defining features of the series, and undoubtedly a foreshadowing of what could be a similar battle in 2017.

Byrne said: “In terms of the modern day full-back, for me Israel Folau – who of course played against the Lions in 2013 – is the complete deal.

“His aerial prowess and his running game means he is leading the way compared to a lot of the other guys currently in world rugby,

“Kicking off the tee is definitely a desirable skill to have as a full-back, as of course it is massive in the modern game.

“When you’ve got a world-class goal-kicker like Leigh Halfpenny it makes it very hard to leave him out of the team and it’s a big tick in his box.

“His defence as well is superb and he is another that defines the modern day all-round full-back. I obviously didn’t do much goal-kicking, but it certainly does help.”