If ever there was a perfect nursery for a British & Irish Lions No.8, Scott Quinnell could tell you all about it. [more] 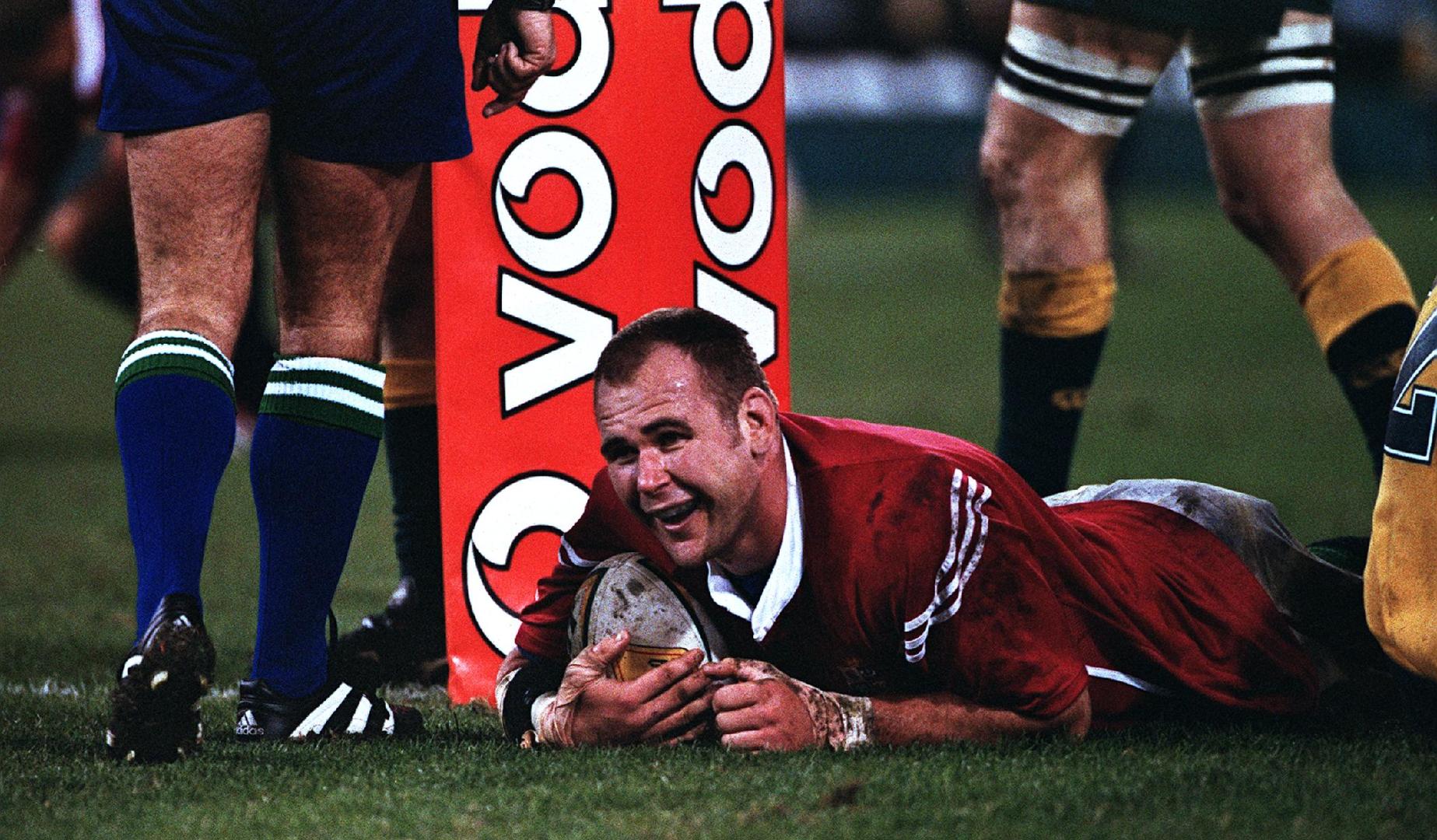 If ever there was a perfect nursery for a British & Irish Lions No.8, Scott Quinnell could tell you all about it.

He was raised on the odour of deep heat at Stradey Park, the clatter of studs on concrete was music to his ears.

His father Derek played five Lions Tests, he was lucky enough to call the great Mervyn Davies his godfather and legendary stand-off Barry John is his uncle.

Derek Quinnell was a bruising lock who made his Test debut in a Lions shirt, while the mercurial John marshalled the rarest of Tour wins against New Zealand in 1971 and is one of the most gifted players to pull on a red jersey.

And Merv provided a bit of everything, he had the guile of a JPR Williams but combined outstanding durability, with strength in the maul and a passing game ahead of his time.

Quinnell believes No.8s have to be the team’s all-rounders, the decathletes and with those formative influences, the former Llanelli No.8 became exactly that.

“You need power, pace, the strength to be able to carry ball and control off the back of the scrum,” the 43-year-old said.

“A lot of people take the quality number No.8s for granted. The likes of Taulupe Faletau, Kieran Read have that control down to a fine art.

“To be able to do that is a skill in itself and of course, getting over the gain-line, the modern day No.8 is a line-out forward too.

“From athletes’ perspective, it is the decathlon – you have to have a little bit of everything.”

In recent years, Jamie Heaslip and Faletau have provided the Lions impetus from the base of the scrum, both playing a crucial role as Warren Gatland led the side to a 2-1 victory Down Under in 2013.

But No.8s come in all shapes and sizes – whether it is Merv the Swerve or a larger-than-life Dean Richards – but all must combine the athleticism and soft hands of a centre with the robust physicality of a back-rower.

New Zealand’s infamous 2-3-2 scrum formation that caused so much controversy when the Lions travelled south in 1908 and survived to distress legendary Lions manager James ‘Bim’ Baxter in 1930, but the uproar ensured it did not last much longer.

In 1931, World Rugby effectively forbade a two-man front-row and in so doing ensured uniformity across scrums world-wide and though the 3-4-1 (or 3-2-3) had been commonplace previously outside New Zealand, that law change presaged the modern era of forward play.

Twenty Scotland caps, nine as captain, four Tests for the 1955 Lions in South Africa and yet Jim Greenwood will forever be remembered as much for what he achieved off the pitch as on it.

That is not undermine what he did do, 6ft2 with a superb turn of pace and brilliant footwork, Greenwood was a huge influence as the Lions drew the Test series with the Springboks.

Though he played flanker in the first Test, Greenwood scored a try as the Lions triumphed 23-22 in Johannesburg and was again instrumental as they won 9-6 at Loftus Versfield.

But the man who became ‘Mr Rugby’ changed the face of the game with his two seminal texts ‘Think Rugby’ and ‘Total Rugby’, while he was mentor to Sir Clive Woodward, Fran Cotton and Andy Robinson as a lecturer and coach at Loughborough University.

The indomitable Jim Telfer refused to take a backward step either as coach or as player.

Melrose back-rower Telfer stood 6ft2 and almost 15 stone in his pomp, but it was his hard-nosed, defiant attitude that separated him from the rest.

He fought through injury to take his place at the heart of a remarkable Lions rearguard action during the second Test in 1968 at Port Elizabeth, while in 1966 he played all but one of six Tests against New Zealand and Australia.

Telfer has twice coached the Lions, once as head coach in 1983 and famously, as assistant to Ian McGeechan in 1997.

His ‘Everest’ speech is unlikely ever to be forgotten, but it was his tactics that cut the gargantuan Springbok pack down to size and his training sessions that reduced even Martin Johnson to tears and ensured the first ever professional Lions left South Africa as heroes.

Perhaps the greatest of all Lions No.8s; in an era of phenomenal Welsh three-quarters Merv the Swerve had it all. He was as vital to the victorious Lions 1971 and 1974 as Willie-John McBride. Davies started all eight Tests in New Zealand and South Africa.

In New Zealand he played 13 games, starting all four Tests and in South Africa his understanding with Gareth Edwards at the base of the scrum was enough to nullify the Springbok pack.

For Quinnell, Davies was a larger than life figure and a has a special place among his very earliest memories.
“I remember after the Lions Tour in 74, me and my friends won a fancy dress competition in the local village dressed as Merv the Swerve,” Quinnell said.

“I am not sure how my father felt about that. We went away, we put our Lions jerseys on, we put our socks and shorts, socks and boots on.

“Foolishly enough, at the age of four or five, I taped my hair up and I said at the time I would never do again.
“To go in 71 and 74 and win both is the sign of a very, very special  player and a very special man.”

In a Wales jersey he clinched two Grand Slams, three triple crowns and with his distinctive moustache and headband, he was – like all good No.8s – at the heart of everything that great side achieved.

Davies’ career ended prematurely in 1976 after suffering a brain haemorrhage playing for Swansea and though his life was saved, he missed the chance to cap an unforgettable Lions career by captaining the side under his former skipper and then coach John Dawes.

‘Deano’ was a giant of a man and the most formidable of No.8s. At 6ft3 and 19 stone, he was almost impossible to stop on the gainline.

He cut a distinctive figure on the field, his socks around his ankles and his shirt always un-tucked.

He started six Tests for the Lions, his finest hour coming in 1989 when alongside Mike Teague and Finlay Calder they came from behind to clinch a 2-1 Test series victory.

One-man pack Scott Quinnell comes from serious rugby stock, but unlike his uncle Barry John, his game was based on raw power.

He was denied a shot at the Springboks in 1997 after being ruled out by a double hernia operation, but in 2001 he arrived in Australia with the bit between his teeth.

Few people hit the gain-line harder than Quinnell, he took the ball at pace and on the hard grounds of Australia, he excelled.

"I enjoyed the position, I enjoyed it from a young age coming through the system. I remember at Under-15s I was playing No.8 and they tried me out at prop for one game and I thought ‘I’ve got to get fitter’ and make sure I don’t sneak up into the front row," he joked.

"You play to your strengths and mine was probably making hard yards for the team, trying to put people into space and if not then going down to create quick ball.

"That is what stood out in my game, I didn’t make the 20-odd tackles that they’re talking about now, but I carried 20-odd times and hit the gainline."

At 22-3 in the first Test at the Gabba, Quinnell made the most of Rob Henderson’s break, collected the ball from three metres out and carried two Wallabies over to score the crucial try in a memorable Test win.

When it comes to 2017 the Lions certainly won’t be lacking for contenders at the base of the pack and Quinnell is adamant it will be the strongest Lions squad ever to head to the Southern Hemisphere – particularly at No.8.

He explained “Heaslip has been outstanding, he brings a huge amount of experience.  Billy Vunipola’s gain-line success is incredible and the way he has worked to improve over the past 18 months is brilliant.

“Faletau is right up there with Kieran Read at the moment and Nathan Hughes has been brilliant for Wasps over the past couple of years.

“That is why in 2017, I believe it going to be the strongest squad ever to leave these shores.”