The typical profile of a British & Irish Lions winger might have changed over the years, but the job description certainly has not: score tries. [more] 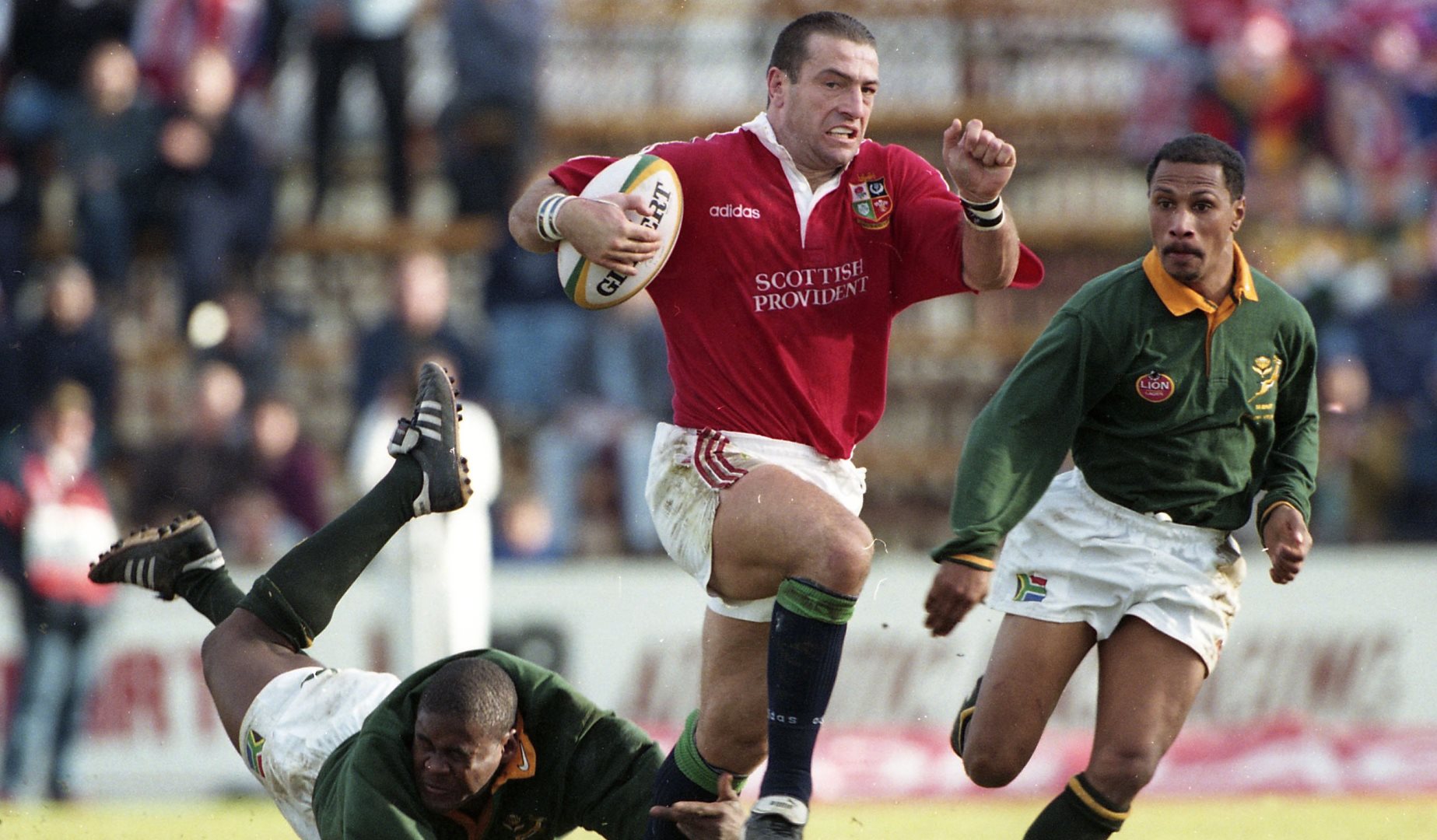 The typical profile of a British & Irish Lions winger might have changed over the years, but the job description certainly has not: score tries.

Crossing the whitewash is the prize currency for the speedsters out wide and the Lions have had more than their fair share of the all-time greats.

Trace back a path through the tourists’ most iconic moments and the narratives are irrevocably interlinked with the men wearing Numbers 11 and 14 on their back. Of the 98 hat-trick scorers in Lions history, 59 were run in by wings.

From Ken Jones through to George North via the likes of Peter Jackson, Gerald Davies and Jason Robinson – wingers have more than played their part in the Lions iconic status.

In 1997 it was John Bentley who burst onto the scene to grab the Tour by the horns.

His Tour-saving try against Gauteng Lions turned the tide for an historic series win and he knows better than most how the role of the winger has changed – even if their importance remains paramount.

“As the game has progressed the role of the winger has totally changed,” he said.

“No longer are you just stuck out on your wing, now you are on the move looking for as much activity as possible.

“It is one of if not the most effective and exciting positions to play the game, you can go where you want and when you want to try and make a difference.

“Nowadays their level of involvement is so high, even more so than my day, I will be the first to recognise that the game has changed and come on leaps and bounds since then.

“You have your core roles of course, you are one of the last lines in defence and you need to cover kicks and everything else.

“But of course you have got to be on the end to finish off the team’s moves. When all is said and done a winger is ultimately judged on how many tries he scored – that’s just the way it is.

“And all wingers know that, that is how they are wired as well – they want to get their name on the scoresheet.”

Compare Drew Stoddart who played on the wing on the very first Lions Tour in 1888 to George North and physically the difference is a stark one.

North and other behemoths like Shane Horgan who toured New Zealand in 2005 now come in at 100+kg.

“I was 6ft and 18 stone which was pretty big but you look at the state of wingers like George North now and they shouldn’t be allowed,” jokes Bentley.

“My recollection as kid was that the winger was someone small who could run fast but couldn’t really catch or pass – it was very rare that they actually touched the ball so I didn’t want to play there.

“I played scrum-half until I was about 17 then I move into the centres, I had only played on the wing in international rugby before I changed to rugby league – that was probably because my defence was not good enough.

“But when I came back to union I was a winger and since then the role has become more and more varied.”

Only ten wings have captained the Lions in a match, whilst the most recent was Bruce Hay v Eastern Transvaal in 1980.

Just three of those have skippered in Tests: Bill Maclagan in 1891, Teddy Morgan in 1904 and Arthur Smith in 1962 but that does not mean they have not gone down in history.

Wingers have a wide variety of skillsets but there is no substitute for raw pace and Jones had that in spades.

An Olympic silver medallist from 1948 in the relay, Jones did not enjoy a spectacular scoring rate for Wales but on the 1950 Lions Tour he was a man inspired.

One of the greatest all-round athletes to ever represent the Lions, he turned down a call-up from the Welsh athletics squad to head to New Zealand.

And he showed off his speed against the All Blacks with one of the all-time great Lions tries, racing 75 metres and leaving Bob Scott trailing in the fourth Test.

Jones scored 16 tries in 17 games on that Tour, while he went on to score the winning try against New Zealand in 1953, the last of his Test career and Wales’ last win over the All Blacks.

After a mere four international caps Tony O’Reilly became a teenage Lion. His 16 tries in South Africa in 1955 still stands as a post-war record in that country and his 17 in New Zealand four years later was equalled by John Bevan in 1971, but has yet to be bettered.

His 38 tries is the highest tally by a Lions player in history, and his six tries in 10 Tests, four of which came in successive matches, is another long-standing record.

At 6ft2in tall, weighing almost 15 stone and with flaming red hair, O'Reilly was a barrelling winger more commonly seen today, but a real rarity when he was in his pomp.

He was the youngest Lion of all-time at just 19 years 53 days against Transvaal Universities at Ellis Park in 1955.

The oldest winger was Shane Williams against the Brumbies in 2013 at 36 years 112 days almost 3 years older than the previous oldest wing – Maclagan in 1891. In fact only two Lions in any position have been older than Williams – Neil Back and Charlie Faulkner.

It seems unfair to not also mention the great Peter Jackson who also terrorised Kiwi defences on the other wing in that 1959 Tour, he finished with a remarkable 14 tries from 16 games.

Davies got his first taste of the Lions in 1968 but on that historic victorious Tour to New Zealand in 1971 the Welsh winger was superb.

He scored three tries in the four Test series against the All Blacks that the Lions won 2-1 and his jinking runs and dazzling sidestep caused carnage and drew admirers all over the country.

Englishman David Duckham was also a revelation on the wing in 1971, scoring 11 tries of his own throughout the Tour.

But Davies was the cutting edge for those famous tourists, putting to bed the disappointment of defeat in South Africa three years previously.

And Davies’ involvement with the Lions does not end there, he also managed the 2009 Lions Tour to South Africa

Another of the Lions athletically-gifted wingers, Williams represented Wales as a sprinter at the 1970 Commonwealth Games, but turned his focus fully to rugby by 1974 to star for ‘the Invincibles’ in South Africa.

Williams became one of the finest backline finishers, shining first in South Africa and then showing up well again in New Zealand three years later.

The then 26-year-old schoolteacher had to take unpaid leave to tour South Africa; a return of 12 tries from as many games and a record four in the Test series left the tourists grateful for his sacrifice.

Williams' pace and understanding with the great Gareth Edwards was a potent weapon for the tourists as Williams scored a record-equalling (Duckham is the only other Lion to accomplish the feat) six tries against South West Districts, and further scores in the second and third Test wins.

Three years later, Williams toured New Zealand as a Lion, and although his Tour was ended prematurely by a hamstring injury suffered during the third Test he still notched up a further 10 tries, only one fewer than top-scorer Andy Irvine .

The dual-code England international was one of the saviours of the 1997 Tour to South Africa.

Having only converted back from rugby league in 1996, Bentley was a surprise call-up to some when Sir Ian McGeechan named his side to face the world champion Springboks.

But Bentley became such a galvanising figure for the Tour, both on and off the pitch that he worked his way into the side for the second and third Tests.

His famous tour-saving try against Gauteng Lions is one of the iconic moments of that, or indeed any Tour as the Lions bounced back from a disappointing defeat to Northern Transvaal.

Bentley admits he had no idea at the time quite what an iconic moment he had created in the Lions’ storied history of touring.

But after a sleepless night with the adrenaline still pumping, the tourists were back on track and on their way to an historic series win.

“It was only over the next few days, when the press got hold of it, but really not until got back home that I realised what a big deal it was,” he added.

“Telfs (Jim Telfer), Geech and Fran (Cotton) talk about defining moments – well this certainly got the tour back on track.

“It is without a doubt the outstanding highlight of my career and I never expected to be there. I was very fortunate to be part of a great group.”

Bentley sums up Robinson best in the following quote:

“Everyone always says that Jonah Lomu was a freak. But they forget that there was another one that came after him.

“His name was Jason Robinson and his talent was just a freak-ish, only in a different way. It was almost impossible to tackle him.”

Certainly Chris Latham feels the same after he was skinned by the England winger, who could also play full-back, for one of the great Lions scores in 2001.

Robinson scorching into the left corner at the Gabba as the tourists secured a famous first Test win was a vintage moment and one that cemented his place in the hearts of union fans the world over.

That he went on to lift the World Cup with England and tour again with the Lions in 2005 to New Zealand epitomises the talent that he had at his disposal.

In the more recent history Tommy Bowe has become a Lions favourite for his efforts in the 2009 and 2013 Tours while North’s fireman lift of Israel Folau is one of the most iconic images of the last Tour to Australia.