LionsWatch: How Ireland made history in Chicago

It's a result which saw Ireland make history on a dramatic afternoon in Chicago, but just how did Joe Schmidt's side get the better of New Zealand? [more] 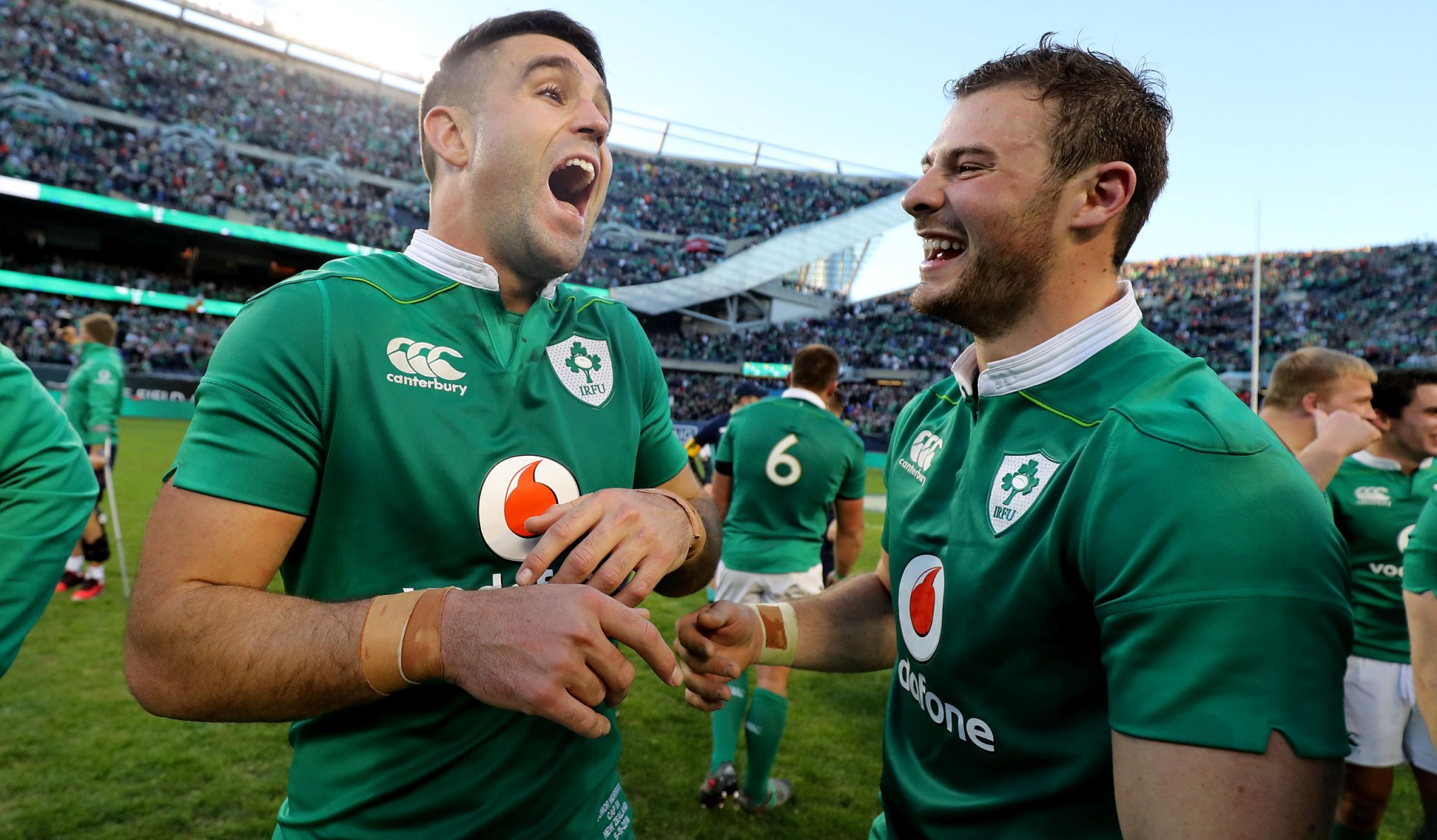 It’s a result which saw Ireland make history on a dramatic afternoon in Chicago, but just how did Joe Schmidt’s side get the better of New Zealand?

Few had given Ireland much of a chance but three quick-fire scores stunned the All Blacks and from there, they never looked back.

It was a true team performance and that was borne out by the stats as centre Robbie Henshaw and a trio of back-rowers – CJ Stander, Josh van der Flier and Jamie Heaslip – all made more than ten tackles.

Henshaw also hit doubles figures in number of carries, as did Rob Kearney and the full-back showed just how dangerous he is with ball in hand by making more metres than any other Irish player with 56.

And despite the contributions of the entire squad, four-time Lion Brian O'Driscoll picked out a couple of men in particular for special praise.

To a man we were brilliant but @ConorMurray_9 once again was ridiculous!!!

Special word for @henshawrob after yesterday's win. What an engine. Up there with Murray in his performance.

There is a lot to be said for how a side reacts to the challenge of the haka, and Ireland’s response was certainly filled with emotion.

In a touching tribute to Anthony Foley – the Munster head coach who passed away just a few weeks ago – the Ireland players made up a figure of eight for ‘Axel’. A poignant rendition of ‘Ireland’s Call’ played on the violin prior to the game added to the emotional atmosphere.

Ireland took that spirit forward into a frantic start that ensured they went into half-time with a 17-point lead.

Captain Rory Best said: “It was the national team's first time together since his passing and it felt like the right thing to do.

“We wanted to put the Munster boys at the front and to show respect to Axel and his family.”

Chicago had not been short of history in this week. Over on the baseball diamond, the Cubs ended their 108-wait for a World Series title, and with Ireland looking for their first win in 111 years against the All Blacks, suddenly the impossible task no longer seemed so daunting.

Of course Schmidt did not pay any attention to the Cubs' success, but after the longest dry streak in American sports came to an end, it's hard to believe the Irish didn't at least take some inspiration.

“Gee, I’d love to believe in omens but I don’t,” Schmidt said before the match. “I’m not superstitious at all. 1908? That’s a bit similar to 1905. But I think the similarities stop there.”

For Ireland, it was always going to be important to come out of the blocks firing, but even they may not have expected to hold a 30-8 advantage.

That all came down to an electric start, with Jordi Murphy, CJ Stander and Conor Murray all crossing whitewash early on.

But it was Stander in particular taking charge in one of the key battles of the afternoon, racking up eight all-important carries while also making 14 tackles as he went toe to toe with All Black skipper Kieran Read.

It was faith shown by Foley that eventually saw Stander get his chance, first with Munster and then in the international scene with Ireland.

Memories to last a lifetime with a history defying team!


But despite proving his worth against the All Blacks, Stander is still expecting a tough challenge when the sides face off again in a fortnight’s time.

“On a personal level you want to show yourself that you can do it,” said Stander.

“And everyone who doubted you. It is great to have a performance against a guy like that.

“But (Read) is going to come back at us in two weeks time. That’s when you have to show what is in you.

“It’s important you have to keep that in the back of your mind. It was a great performance. We’re delighted with it but we are going to have to suck it up.”

Stander's display was part of a whole-hearted display from his side, boasting 67 per cent in both territory and possession in the first half

All Black fightback and Zebo magic

But if there is one thing we know about the reigning world champions, they won’t give up without a fight.

TJ Perenara, Ben Smith and Scott Barrett all crossed, adding to George Mola’s first-half score, with New Zealand clawing the game back to within four points.

But it took just one moment for the momentum of the game to switch once again – with a piece of Zebo magic that will live long in the memory.

On the hour mark in Chicago, moments after the All Blacks had scored a quick-fire double, Conor Murray launched a high ball into the opposition half, with 2013 British & Irish Lion Zebo – against the odds – leaping high to not only grab the ball, but hang on while hitting the turf.

But as incredible as Zebo's effort was, it was a team effort which won Ireland the game, despite having the edge in only a handful of stats.

But the numbers they did hold proved decisive, successful in all seven of their mauls, twice stopping the All Blacks with successful choke tackles, and crucially keeping their discipline, conceding just four penalties to New Zealand's 12.

While the All Blacks continued to roar back, they couldn't quite deny Robbie Henshaw from being in the perfect to place to cross the whitewash – picking up his second Test try in the process.

With just five minutes to go, and the All Blacks within a score, the centre powered his way through the  defence to notch a try that brought Chicago to its feet in dramatic style.

Not content with just enjoying a standout defensive game, Henshaw delivered at just the right time to alleviate any late nerves, and secure a famous Test victory in the process.

That was despite the All Blacks boasting a bounty of figures of their own, making 20 more runs, gaining almost three times as many metres as Ireland and beating five more defenders.

But for those celebrating in green in Chicago, there's only one set of numbers that will be remembered for many, many years to come. Ireland 40 New Zealand 29.

There were many amazing full-time whistle reactions to @IrishRugby beating the All Blacks, but @DonnachaRyan's was potentially the best!! pic.twitter.com/NC4FtIMNra

What an amazing day!! Thanks for all the support!! #History pic.twitter.com/hr5Q29mOzI

Joe Schmidt made the decision to bring back Rob Kearney for this encounter, and was rewarded with a brilliant display from the full-back.

In addition to leading the way for Ireland in terms of metres made, he did the same for defenders beaten, with four, while he was also the leading carrier for Schmidt’s side.

Finally a word must go to Josh van der Flier, brought on after just 26 minutes for try-scorer Murphy.

The 23-year-old, in his maiden year on the Test scene, finished second only to Stander as Ireland’s top tackler, with an all-action display.

Positives for Wales ahead of Argentina Test

Wales made a slow start to their November series with defeat to Australia, but despite the final 32-8 scoreline there were some positives to take from the game.

Ross Moriarty was a standout performer, both as a carrier and defensively, after shifting to the No. 8 position.

The Gloucester back row racked up 18 tackles for Rob Howley’s men, while making 11 carries.

And in just 19 minutes, winger Hallam Amos made his presence felt, racking up 70 metres with ball in hand, and making three clean breaks.

If the 22-year-old wanted to catch the eye of Howley, he could not have done much more against the Wallabies.

Scott Williams scored Wales' only try, while fly-half Sam Davies came off the bench to make his debut. And the youngster made four tackles during his short spell on the pitch.


Next up for Wales is a clash with Argentina, before further encounters with Japan and South Africa.