Ireland's landmark autumn continued with a hard-fought 27-24 victory over Australia as their defence stood firm against a barrage of second-half attacks to complete wins over New Zealand, South Africa and the Wallabies in the same year for the first time. [more] 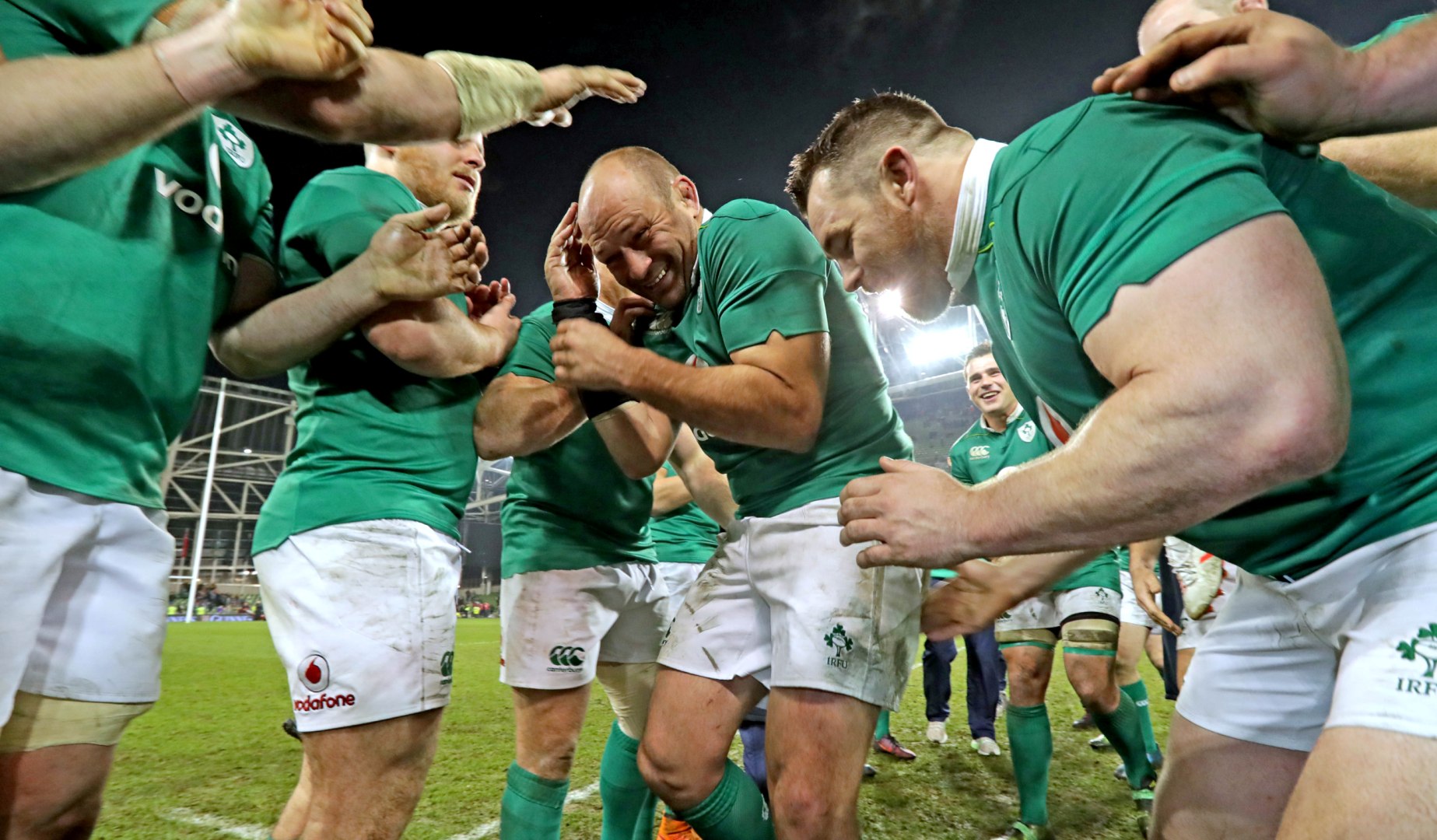 Ireland’s landmark autumn continued with a hard-fought 27-24 victory over Australia as their defence stood firm against a barrage of second-half attacks to complete wins over New Zealand, South Africa and the Wallabies in the same year for the first time.

The home side took the game to Australia in the opening 40, with tries from Iain Henderson and Garry Ringrose, as well as a Paddy Jackson penalty, established a 17-0 lead.

Australia hit back through Dane Haylett-Petty on the stroke of half time, and second-half scores from Tevita Kuridrani and Sefa Naivalu put the Wallabies ahead.

But a Keith Earls try and another Jackson penalty sealed an impressive win for the home side and give Rory Best a fitting end to his 100th Test cap.

Ireland started like a train and Conor Murray earned the first penalty after just 40 seconds, with Jackson kicking for the corner.

Another 18 phases later, as the home side prodded and probed for an opening in the Australia defence, it was Will Genia that won possession back in a turnover on his own five-metre line – but the referee had already blown for another penalty, with another kick to the corner ensuing.


The Irish had the upper hand but were failing to turn their territory and possession advantage into points.
Jackson did eventually get points on the board in the 18th minute, though, as Australia were penalised 40m from their tryline.

Dean Mumm was sent to the bin in the 22nd minute and Ireland continued to dominate, scoring their first try of the game through Henderson two minutes later.

Earls ran onto a loose ball, taking superbly to step inside and feed Henderson, who crossed for the score – Jackson converting to establish a ten-point lead.

With more than half an hour on the clock Australia gave away their seventh penalty, compared to just one from the Irish.

And the visitors were made to pay as a second Irish try came in the 34th minute.
Ringrose collected the bouncing ball from Murray in the Australia 22, before scything through the Wallaby defence to dot down, with Jackson adding the extras.

But Michael Cheika’s side were not done, and in the dying moments of the first half Israel Folau’s offload sent Haylett-Petty through to touch down, after his own kick forward started the move.

And Bernard Foley converted the score to send his side into the break just ten points down after a thrilling opening 40.

Australia thought they had further narrowed the Ireland lead in the first two minutes of the second period, but Henry Speight’s celebrations were short-lived as the referee brought pack play for a forward pass from David Pocock.

But the Aussie fans did not have long to wait for more reason to cheer, as Kuridrani finished off a fine passing move from right to left, in front of the Ireland defence before the centre ran it home in the left corner – Foley again successful with the boot.

Jackson converted a penalty minutes later though to ease the pressure on his side and establish a six-point lead.

The theme of the second half continued as the hour mark approached, with Naivalu running in to score in the right corner, with Foley’s conversion putting Australia into the lead for the first time in the match.

The effect of Injuries to Rob Kearney, Andrew Trimble and Jared Payne, forcing them off in the first half, were beginning to show and Australia continued to dominate, with Foley extending the lead from the kicking tee in the 61st minute.

WATCH: The moment of victory for Ireland. A hard-earned win. Brought to you by @DoveMen. #ScrumTogether https://t.co/ixyS1sGpuE


Australia’s dominance was flipped on its head with 15 minutes remaining as Ireland roared back into life.

After several minutes of concerted effort, Earls collected a pass from Simon Zebo to cross in the corner, with Jackson making a pressure kick from the left touchline to put his side three points to the good.

Australia continued to dominate possession, and looked the more likely to come back and win the game, but the Irish defence stood firm to repel their attacks.

And when Peter O’Mahony turned the ball over in the 78th minute, Australia gave away the penalty that allowed Ireland regain control.

A kick into Australian territory, followed by stout resistance in the scrum, saw the clock tick into the red and when the Wallabies infringed, the referee’s whistle signalled another famous win for Ireland.