Glitz and glamour are seldom words associated with props, and according to 1997 British & Irish Lion Paul Wallace there is nowhere on the field as physically demanding. [more] 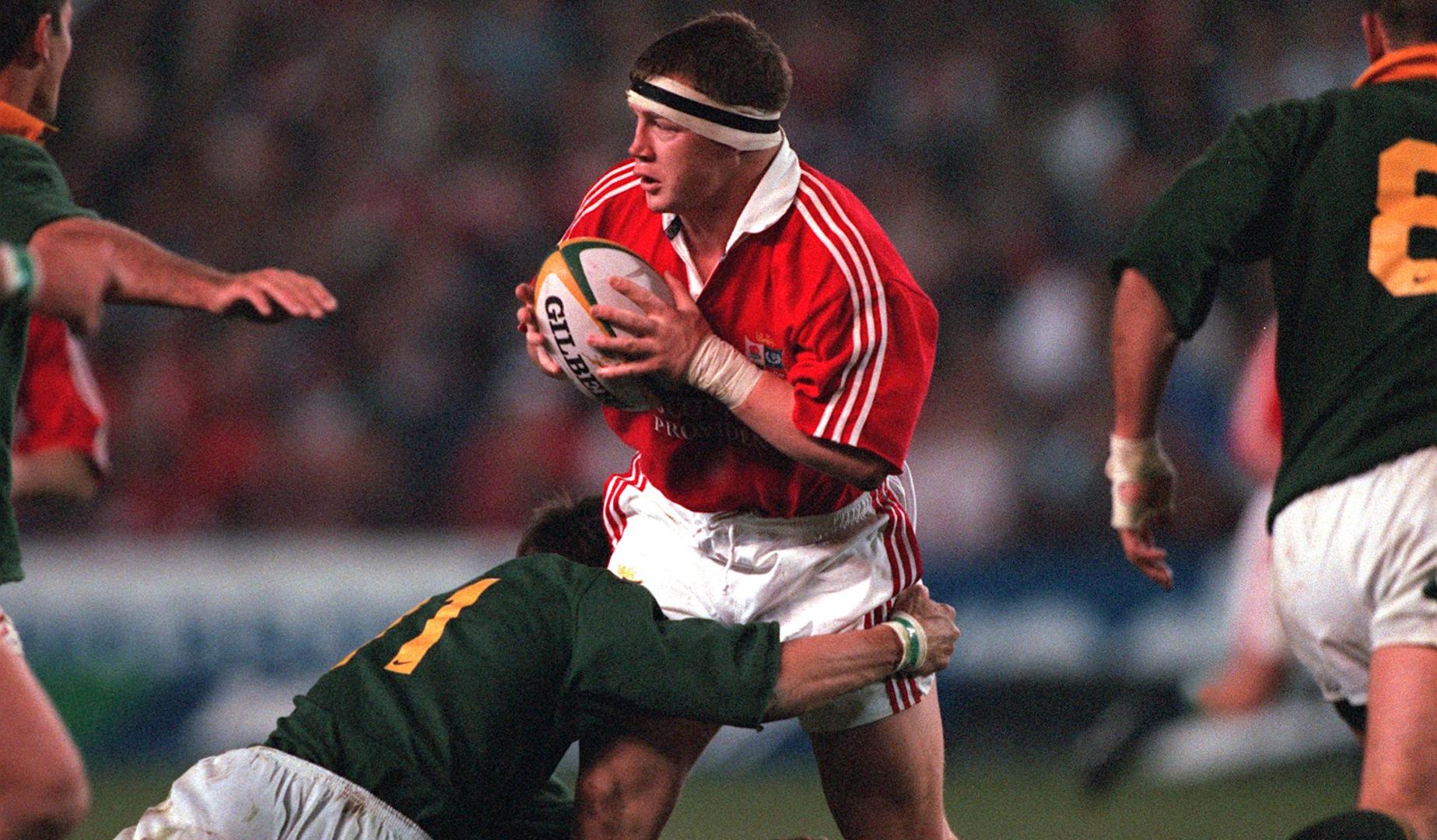 Glitz and glamour are seldom words associated with props, and according to 1997 British & Irish Lion Paul Wallace there is nowhere on the field as physically demanding.

Wallace made his name alongside Tom Smith and Keith Wood as part of one of the greatest technical scrummaging triumphs in history as the 1997 Lions Test pack out-thought and out-manoeuvred the revered Springbok eight to edge the Test series 2-1.

The Lions front row trio gave up 40kg to Os du Randt, Adrian Garvey and Naka Drotske, but managed to set the platform for a famous Lions win.

The old saying goes that forwards win games and backs decide by how much, indeed only six props have ever scored Test tries for the Lions.

Such is the rarity of a front-rower crossing the line that 33 years passed between Clive Williams’ try in the fourth and final Test 17-13 win against South Africa in 1980 and Alex Corbisiero’s crucial try in the series-clinching 2013 third Test against the Wallabies in Sydney.

The others are Gerald “Beef” Dancer in 1938, Ray MacLoughlin against Australia in 1966, Ian McLauchlan in the famous Test-series win over the All Blacks in 1971 and Williams’ fellow prop Graham Price against South Africa in 1980.

Though the role of prop has arguably changed more radically than any other on the field as professionalism creates bigger, faster, more highly-skilled forwards – the scrum remains any legitimate Test prop’s meat and drink.

“Tight-head in particular– is the toughest spot physically on the pitch. If you have a lot of scrums, the amount that it takes out of you makes it very difficult to impress around the park,” 48-cap prop Wallace explained.

“The quality of the game that you have, you very rarely see a tight-head prop get man of the match, unless it is really slow, wet day and there’s no running rugby.

“Mako Vunipola, as a loosehead, and Tadgh Furlong, Gethin Jenkins, Dan Cole, on the opposite side, you look at their tackle count, the amount of clearouts, getting over the ball at the breakdown and getting steals.

“There is more encouragement now to get props involved and the skill level is improving all the time.

“When you look at Mako for Saracens, he is often their playmaker, Gethin is one of the best tacklers around and Furlong’s carrying is exceptional.”

Given their distinctiveness, it is hard to believe now that front-row specialism has only existed since the late 1920s.

The first Lions Tour that took this in was the 1930 trip to New Zealand and Australia, where Henry Rew and Henry O’Neill became the first ever recognised props to pull on the famous red jersey.

Since then 89 different players have propped for the Lions 28 from England, 26 from Wales, 20 from Ireland, 15 from Scotland.

Legendary Irish prop Syd Millar’s three tries is more than any other Lion, while his 43 games – including nine Tests – is also a best among props.

John O’Shea is the only prop to score more than two tries in a game, which he did against Rhodesia in 1968, while Mako Vunipola’s try against Western Force in 2013 is the only time a replacement prop has crossed the whitewash.

Surprisingly, more props have kicked at goal than have scored Test tries. Nine different men have kicked goals, while John Brett, in Argentina in 1936, racked up 72 points on a single Tour from the front row.

BIG AND GETTING BIGGER

At six foot five and 128kg, Andrew Sheridan is the tallest prop ever to turn out for the Lions, though 2013 Test prop Vunipola, at 130kg, holds the distinction of being the heaviest-ever Lions prop.

Though a hooker by trade, Dai Davies packed down at prop for a match against combined Ashburton County/North Otago in 1950 and is the lightest prop ever to play for the Lions.

At 82kg, Davies is nearly 50kg lighter than Vunipola and the Lions’ lightest-ever player, scrum-half Herbert Whitely was himself only 60kg.

Three Tours as a player, one as a series winning coach and another as a manager. On top of that he was also a member of the Lions committee in 1993 and 1997, a selector in 1977 and chairman at the time of the 2001 Tour to Australia.

The 16-stone front-rower started out as a stand-off and maintained those handling skills as a dangerous force in the loose.

A tight-head prop by preference, he was also sufficiently versatile to pack down at loose-head in Tests on both the 1959 and 1962 Tours.

Alongside Sean Lynch, McLauchlan built the platform on which the Lions backs were able to earn the team's first and only series victory over the All Blacks.

At five foot nine, the name “Mighty Mouse” followed him around as he consistently demonstrated his ability as the planet’s most fearsome scrummager – while he scored the decisive only try in the 1971 first Test victory.

In South Africa , he was an established cornerstone of the unbeaten Lions pack alongside hooker Bobby Windsor and tight-head Fran Cotton.

Alongside Charlie Faulkner and Bobby Windsor he formed Wales’ heralded Pontypool front row and on the 1977 Tour to New Zealand and Fiji, Price confirmed his status as a world-class performer in a Test pack that was one of the strongest the game had seen.

Fran Cotton
Fran Cotton is revered as one of the pillars of the team that went unbeaten through South Africa in 1974.

His partnership with Ian McLauchlan – over whom he had half a foot in height – proved one of the most destructive propping partnerships South Africa had ever seen.

Cotton's height and turn of foot also made him a valuable contributor in both the lineout and the loose, even though he never scored a try in his 34 Lions matches.

Three-time Lion Jason Leonard was for a while the world's most capped player, but Ian McGeechan highlighted him as one of his greatest-ever Lions for the contribution he made as a replacement in 1997.

He would win six Test caps across three Tours , but the ‘Fun Bus’ proved as competitive as ever to support Smith and Wallace in their quest to down the Bok front-row.

Wallace, a late convert to the front row at 15, admits his first few scrums were not a sight to behold – as a young, light prop he learned the hard way about what is needed to succeed in that position.

But in the intervening years, he honed his skills, mastered the dark arts and earned a reputation as the world’s pre-eminent tight-head.

“I got well and truly demolished in the scrum the first time round, I was out for two or three weeks and then I was up against the Irish Schools loose-head,” he said.

“I was three years young to get into the senior team, so I was identified as maybe the biggest of the back row there and I was also from Cork, so they chucked me in the front row.

“I had a baptism of fire, but I guess by the end of the year I had sort of learned to hold my own and then the following two years played in the Irish Schools team.”

After he and Smith fought off previously capped Lions Dai Young and Jason Leonard for the starting berths in Jim Telfer’s pack, they laid the foundations for a famous Test win.

“Jim and Ian kept a very open mind on selection and we were destroying other scrums in the midweek games,” Wallace said.

“There was a lot of technique, we had a bigger back five behind us and stupidly in the first few scrums I tried to square-scrummage.

“I came off second best until I realised  the best thing was to put your opposite number in a depowered position where he can’t transfer his weight behind him.

“It is a thinking man’s game.”