From record-breaking runs to historical victories, masterful displays to new stars emerging, it was an autumn to savour for the four home nations. [more] 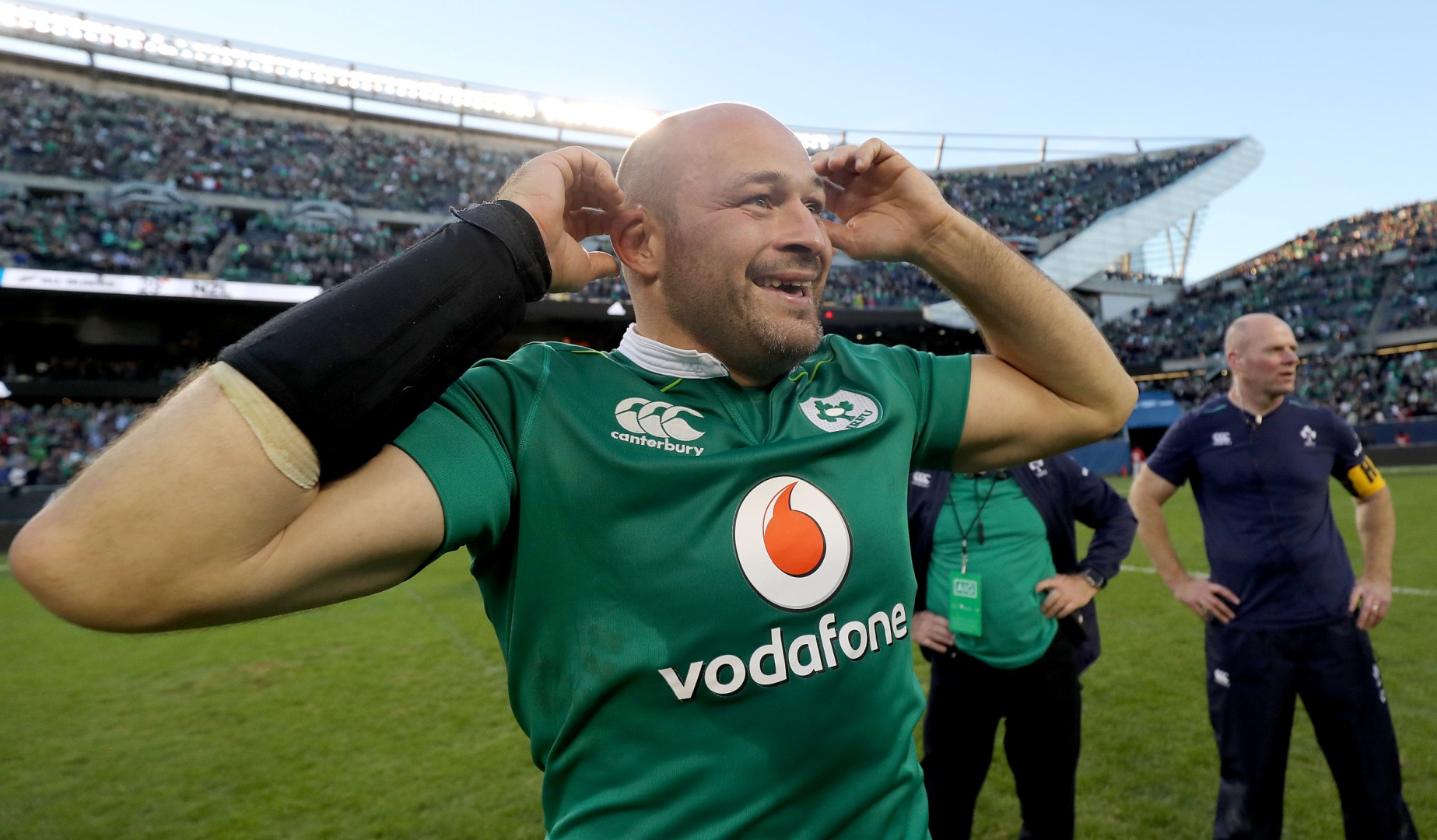 From record-breaking runs to historical victories, masterful displays to new stars emerging, it was an autumn to savour for the four home nations.

And with The British & Irish Lions 2017 Tour to New Zealand fast approaching, excitement surrounding the fortunes of Ireland, England, Wales and Scotland continues to build.

Here we take a country-by-country look back at the autumn campaign while also casting our eye into the future with the 2017 RBS 6 Nations fast approaching.

Lions Head Coach Warren Gatland will name his playing squad in less than five months and he certainly will not be short of options.

If the 2016 RBS 6 Nations Grand Slam was the starter and an historic summer cleansweep in Australia was the main course, then Eddie Jones’ England served up a delicious dessert this autumn to end 2016 on a high.

They would be without the likes of Maro Itoje, James Haskell, Jack Nowell and Anthony Watson for the entirety of their autumn while stalwarts like George Kruis and Billy Vunipola also missed parts of the campaign through injury.

But such was the confidence from Jones’ side, England went to Twickenham with little fear.  First against the force that is South Africa, a side they had not beaten since 2006. Four tries and 37 points later, Boks ghosts were laid to rest.

They backed that up by blooding new faces, and some old ones like returning winger Semesa Rokoduguni, in their compelling nine-try victory over Fiji.

Free-flowing rugby continued to prove a staple part of England’s diet, confidence as high as ever in a run that drew comparisons with the 2003 World Cup-winning side.


But it wasn’t just the old guard making their mark, Kyle Sinckler, Nathan Hughes, Ben Te’o and Charlie Ewels all debuting across the autumn.

Argentina were next up for Jones’ side and – despite an early red card for Elliot Daly – the 14-men did enough to put the Pumas away and set up an historic re-match with the Wallabies.

Michael Cheika’s Australia, still smarting from their trio of defeats in their own backyard that summer, came roaring out of the blocks at Twickenham last Saturday.

They had one try and two others disallowed in a rollicking first 20 minutes but slowly but surely England turned the tide.

TRY! Jonathan Joseph intercepts and has a free walk-in. England surely wrap this one up. SS2 now or here: https://t.co/MV3TiuByhd pic.twitter.com/2vHxFSTWny


And the boot of Owen Farrell – who this autumn became only the second English man after Jonny Wilkinson to break the 500-point barrier – was key to it.

As was Jonathan Joseph – one of the heroes of the autumn – who bagged a double while also creating another for the returning Marland Yarde.

2013 Test Lion Ben Youngs was also at his sniping best once more to complete a fabulous autumn for the scrum-half with a quick thinking try from a tap penalty.

A 37-21 victory over the Wallabies secured an unbeaten calendar year in 2016 for the Red Rose – something they had never done before and equalling their record streak with 14 successive wins. They will take some stopping in 2017.

Remember, remember, the 5th of November – a day Ireland fans will always cherish as the moment they made history against the All Blacks.

Underdogs against a New Zealand side on an unbeaten run of 18 straight wins, Chicago proved a sweet home on neutral territory in a ‘where were you when?’ moment, a victory recorded in some style with five tries for a first success in 111 years.

Jordi Murphy, CJ Stander, Conor Murray, Simon Zebo and Robbie Henshaw scores proved the difference, though in truth it was a team effort as Ireland seemed emboldened by the spirit of Anthony ‘Axel’ Foley, the Munster head coach who tragically died just a month previous.

An All Black comeback was inevitable, but those in the green jersey remarkably, admirably held firm, grinding out the 40-29 win – Henshaw’s late try the green icing on an historic cake.

It was success undoubtedly built on team spirit, a mindset of victory and some extraordinary skills, a high, swirling Zebo catch a particular moment in which Ireland wrestled the initiative.

Chicago, the city that had just a few days previously seen history made on the baseball diamond by their beloved Cubs, witnessed more gems shine through, Joey Carbery capping off a superb personal year with a Test debut.

He proved the first of many, no fewer than eight getting their first call-ups for a clash with Canada, the same number of tries Ireland mustered back on home territory.

That set up a re-match with the All Blacks in Dublin – site of their dramatic 2013 victory – and with 2013 Lion Sean O’Brien back in the No 7 jersey Joe Schmidt’s side once again took New Zealand to the edge.

Competition in the back row for Ireland is fierce right now, look at Josh van der Flier who made more tackles than any other Irishman this autumn despite only actually starting one game.

However, in the end the world champion All Blacks showed their clinical class with three tries in securing a 21-9 victory at the Aviva Stadium but Ireland’s confidence was unbowed.

And in the final clash of their autumn they overcame an horrific injury list, both before and during the game against Australia, to secure a dramatic victory – all on the occasion of skipper Rory Best's 100th cap.

Keith Earls’ last-gasp score was the difference in the end as they downed the Wallabies, the Boks and the All Blacks in 2016 – a feat never before achieved by the men in green.

It was a case of so close but yet so far in Scotland’s autumn opener against Australia – Tevita Kuridrani’s last-gasp score breaking hearts at Murrayfield.

But Huw Jones’ double and Jonny Gray’s masterful defensive display against the Wallabies gave Vern Cotter’s side plenty of heart and they built momentum the following week against Argentina.

Skipper Greig Laidlaw’s nerveless kicking proved the difference in the end in a nip-and-tuck encounter with the Wallabies.

The scrum-half slotted a penalty – his fourth of the match – with the last kick of the game and that was enough to secure a 19-17 win over Argentina.

That is now the third time in a row they have beaten the World Cup semi-finalists and their climb up the IRB world rankings continues apace.

And they will take plenty of optimism into 2017 after Cotter named a strong side to finish of their autumn against Georgia.

Full-back Stuart Hogg was at his free-flowing best in a thrilling first half at Rugby Park in Kilmarnock and what appears to be a fairly settled Scotland back line is beginning to click.

Throw in the emergence of some new faces in the pack – most notably Allan Dell and Zander Fagerson up front and Hamish Watson and Magnus Bradbury in the back row – to complement the towering Gray brothers and Scottish rugby is on the up.

A disappointing defeat to Australia to open their autumn was a bitter pill for Rob Howley’s side to swallow but they bounced back in fabulous style to finish the autumn on a high.

Argentina, Japan and South Africa were all dispatched at Principality Stadium as Wales finished their autumn with three victories.

That is their best-ever return from an autumn series – joint with 2002 – and included only a third win in 110 years over the Springboks.

Leigh Halfpenny – the Lions man of the series against Australia – kicked 17 points in that win over the Boks to complete a triumphant return to international duty.

After over a year on the sidelines with injury, the Toulon man starred both at full-back and on the wing for Howley’s men.

The back row was a rotating cast with stalwarts Sam Warburton, Taulupe Faletau and Dan Lydiate all missing game time with injury but that opened the door for others to shine.


Justin Tipuric rounded off a fine autumn – in which he made 37 tackles in three games – with an exquisite try against South Africa while Ross Moriarty and James King both showed that they too belong at this level.

Throw in the emergence of the likes of fly-half Sam Davies and lock Cory Hill, both of whom made their debuts this autumn, and the intriguing three-way battle between Jonathan Davies, Scott Williams and Jamie Roberts in Wales’ midfield, and the cupboard looks well-stocked over the Severn Bridge.