Jack Conan was the hat-trick hero as Leinster mauled Montpellier to reach the European Champions Cup quarter-finals, but it was an all-round display from Leo Cullen's men that saw them rack up an impressive 57-3 victory. [more] 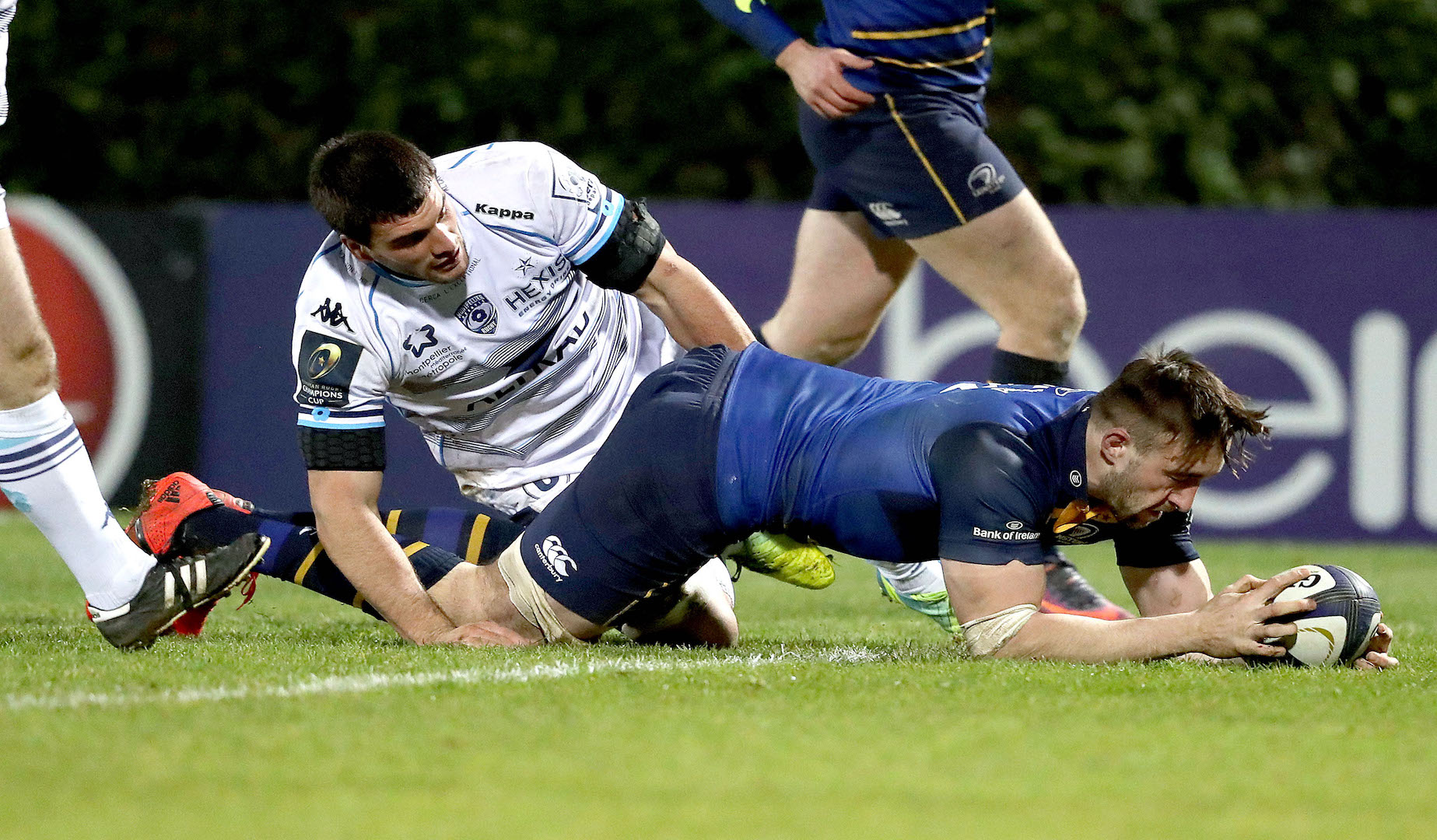 Jack Conan was the hat-trick hero as Leinster mauled Montpellier to reach the European Champions Cup quarter-finals, but it was an all-round display from Leo Cullen’s men that saw them rack up an impressive 57-3 victory.

Conan made the most of his opportunity deputising for 2013 British & Irish Lion Sean O'Brien, as he crossed the whitewash three times much to the delight of the majority inside the RDS Arena.

But there were five other tries for the Leinster faithful to cheer as Montpellier were brushed aside, with Garry Ringrose once again highlighting his talent as he danced over for the final say.

And elsewhere on Friday night, England international George Ford helped himself to 20 points as Bath beat rivals Bristol 57-22 to close in on qualification in the Challenge Cup.

After 2013 British & Irish Lion Jonathan Sexton had sent Isa Nacewa over for the game's opening try with a lovely floated pass, Conan took centre stage as Leinster avenged their defeat at the hands of Montpellier back in October.

First it was Nacewa's turn to set it up as he ran onto his own linked kick to set up Conan for the easiest of finishes, and the back rower was on hand again to dot over after great work from in-form winger Adam Byrne, who did well to collect Luke McGrath's high kick.

And with ten minutes left Conan completed his treble as he picked up a loose Montpellier kick and made them pay.

GARRY RUNS RINGS AROUND THEM

It was left to the impressive Ringrose to complete the win, and he did so in style.

After watching Conan run in three tries, and Nacewa, Byrne, McGrath and Cian Healy all bag one apiece, Ringrose was clearly eager to get on the scoresheet.

And he did so with the best try of the match, showing superb footwork to get over the line following a Ross Byrne offload. The fact that visitors Montpellier had Frans Steyn red carded for a high tackle on Sexton on 24 minutes should not take anything away from the clinical Leinster display as they saw off the French side. And Ringrose was once again at his all-action best, getting the try his display deserved right at the death.

A home win against Castres on January 20 will see Leinster secure a home quarter-final, having finished bottom of their pool last season.

FORD TO THE FORE

Meanwhile, in the Challenge Cup, England duo Ford and Semesa Rokoduguni both scored tries as Bath beat local rivals Bristol 57-22 – the former helping himself to a personal haul of 20 points s the two English sides went head-to-head on the European stage.

40' | TRY! The tries keep coming and this time it's @George_Fordy who goes straight through the Bristol defence. Conversion is good 10-38.

Samoan Fotuali'i crossed for his second try, as Rokoduguni and Chris Cook also scored at Ashton Gate for the visitors.

Tom Varndell, Rhodri Williams and Jack Tovey went over for Bristol, but they remain third in the pool, while Bath are top with one game left to play.

There was also a Challenge Cup victory for Newport Gwent Dragons as they beat Enisei-STM 34-10, but Newcastle Falcons lost 31-27 at Grenoble.