LionsWatch: Battles to watch out for in round 1

The British & Irish Lions Tour to New Zealand is almost upon us, the squad is announced as soon as April so the 2017 RBS 6 Nations is a pivotal battleground in the race to get on the plane. [more] 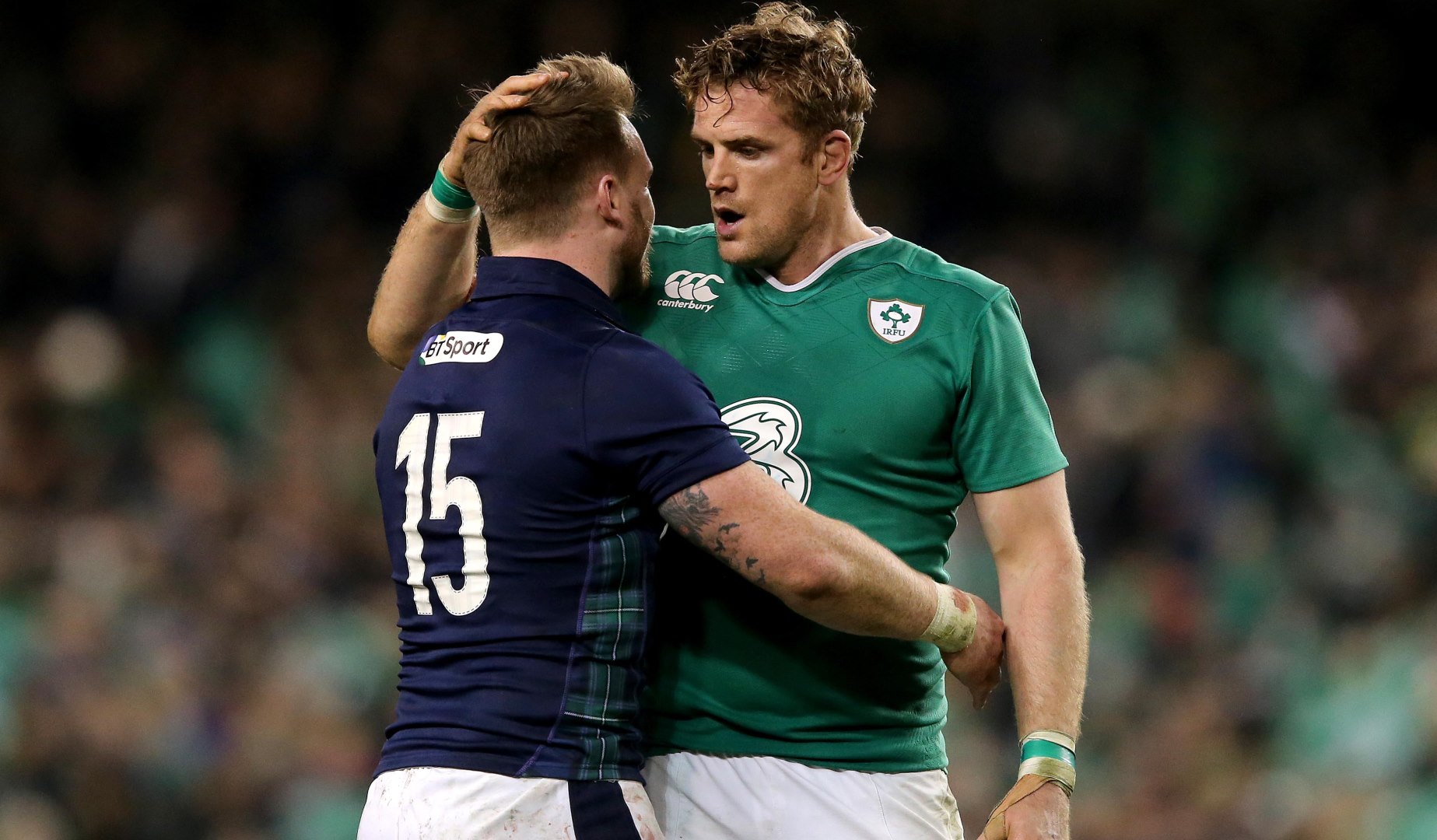 The British & Irish Lions Tour to New Zealand is almost upon us, the squad is announced as soon as April so the 2017 RBS 6 Nations is a pivotal battleground in the race to get on the plane.

Lions Head Coach Warren Gatland will be a keen observer of all the matches involving the four home nations.

The Championship begins in Edinburgh on Saturday as Joe Schmidt’s Ireland – fresh from a famous autumn win over the All Blacks – take on a confident Scotland side.

After that England, Grand Slam holders and unbeaten under Eddie Jones, welcome France to Twickenham hoping to start this year how they finished the last.

And on Sunday Rob Howley’s experienced Wales side will head to Rome to take on Conor O’Shea’s new-look Italy.

Each position will be scrutinised by Gatland and his coaching staff but ahead of the first weekend LionsWatch runs the rule over the contenders in each position.

Three of the four starting full-backs this weekend are already British & Irish Lions.

Leigh Halfpenny is well known to all Lions fans for his heroics in 2013 that led to him being named man of the series in the historic win over Australia.

Injuries have hindered his progress since then but he is back and firing fit for Wales but the challengers are queuing up for his No 15 jersey.

And while he toured with the Lions in 2013, four years later he will be desperate to crack the Test side in New Zealand.

But this weekend Hogg’s work will be cut out for him against the experience of two-time Lion Rob Kearney who was so impressive for Ireland last autumn.

And that is without mentioning Mike Brown, one of England’s vice captains and a near ever-present under Eddie Jones during their unbeaten year as well as the Player of the Championship in 2014.

There should be at least four wing spots available on the plane to New Zealand later this year so Gatland will be keen to see who takes advantage this weekend.

Tommy Seymour and Sean Maitland have been in fine form for Glasgow Warriors and Saracens respectively this season.

But Simon Zebo and Keith Earls – both Lions already – will provide a stern test this weekend in the Scottish capital.

Jonny May finished tries for fun in the autumn for England and has continued that form for Gloucester – but is still waiting for his first-ever RBS 6 Nations try.

While the versatile Elliot Daly offers a different sort of threat on the left wing for the Red Rose.

George North and Liam Williams will be looking to get on the scoresheet against Italy in Rome – North got a hat-trick last time Wales were in town in the RBS 6 Nations and is on a four-match streak in this Championship of scoring tries.

Williams meanwhile has looked supreme for the Scarlets in Europe this season and has now appeared in Wales’ last 14 games in this Championship.

Jonathan Davies edges his three rivals for the No 13 shirt in terms of international experience, the centre starting all three Tests for the Lions in 2013 and set to win his 60th Wales cap on Sunday.

But the youthful exuberance of the other three candidates should not be underestimated.

Huw Jones sprang onto the scene this autumn with a try double against Australia for Scotland while Jonathan Joseph continues to score tries for fun.

The Bath man finished with eight in 13 games as England went unbeaten last year and will look to continue that run against France this weekend.

And Ireland have an exciting new talent in Garry Ringrose – the Leinster flyer who scored against Australia in the autumn in only his third cap for his country.

Owen Farrell might be only 25 but he is already in line to bring up his half century of England caps this Championship if form and fitness allow.

Equally capable at fly-half, Farrell has played exclusively in the No 12 shirt for the Red Rose under Jones and continues to rack up points from the kicking tee with impunity.

While Farrell’s goalkicking cannot be rivalled by his three rivals this weekend, they each offer a different threat.
Robbie Henshaw has quickly become indispensable for Ireland and scored the pivotal try that finished off the All Blacks in the autumn in Chicago and will go up against Alex Dunbar this weekend who has been key for Glasgow Warriors this season.

Scott Williams displaced Jamie Roberts in the Wales starting XV in the autumn and has continued that fine form for club side Scarlets leading them to victory over Toulon and a draw with Saracens in Europe.

None of the fly-halves on display this weekend have toured with the Lions before but there is no shortage of talent on show.

Finn Russell has been sublime for the Warriors this season and with Jonathan Sexton injured will be hoping to prove his worth against Paddy Jackson.

Jackson made his Ireland debut on this ground four years ago in the same fixture and impressed for Ireland in the summer against South Africa.

George Ford will pull the strings for England and hope to repeat his 25-point outing against France two years ago on the same ground while Dan Biggar and Wales head to Rome hoping to build on three wins in November.

Ben Youngs and Conor Murray both toured with the Lions in 2013 and played out two intriguing battles during the European Champions Cup as Munster split their two-game series with Leicester Tigers.

They are both firmly established as the starting No 9s for England and Ireland but the return of Rhys Webb from injury for Wales is a welcome boost for all Lions fans.

Throw in Greig Laidlaw, Scotland skipper and dead-eyed goalkicker and scrum-half remains one of the toughest positions for Gatland to call.

England duo Joe Marler and Dan Cole are comfortably the most experienced props from the four home nations this weekend.

Marler – who was made a remarkable recovery from a fractured leg – will be hoping to steal a march on his injured compatriot Mako Vunipola while 2013 test Lion Cole is a model of consistency for the Red Rose and will win his 70th cap on Saturday.

Scotland have gone for fresher faces – Allan Dell is winning only his fourth cap while Zander Fagerson at 21 is the youngest player in any RBS 6 Nations squad this year.

Tadgh Furlong and Jack McGrath were rock solid against the All Blacks in the autumn and will give the Scottish youngsters a real test.

Meanwhile on Sunday Nicky Smith will make his RBS 6 Nations bow alongside Samson Lee for Wales in their battle against an solid Italian set-piece.

Rory Best replaced Dylan Hartley on the 2013 Lions Tour but the duo now captain their respective countries and with Gatland a former hooker himself, both will be keen to impress in order to get on the plane to New Zealand.

Hartley has proved his fitness and will lead England against France while Best is matched up against Fraser Brown – the Glasgow Warrior who has starred domestically this season and edged out Ross Ford to wear the Scotland No 2 shirt.

Ken Owens secured his spot as Wales’ starting hooker in the autumn and is making his first start in the RBS 6 Nations since the 2015.

Alun Wyn Jones will be in the limelight this weekend, leading out his country for the first time as permanent skipper.

He does it in the same city that he made his bow as Wales skipper back in 2009 and is hoping to secure a spot on his third Lions Tour in a row.

Alongside him Jake Ball has been in superb form of late for the Scarlets and comes in for the injured Luke Charteris.

George Kruis is injured for England while Maro Itoje slides to flanker meaning Courtney Lawes and Joe Launchbury again get the chance to impress at Twickenham.

And up in Scotland the Gray brothers face off with Devin Toner and Iain Henderson in what looks to be a compelling battle for dominance in a Championship where it pays to hit the ground running.

2013 Lions skipper Sam Warburton shifts to the blindside flanker to accommodate the in-form Justin Tipuric in a dangerous looking Wales back row.

Both toured with the Lions four years ago and, given a fair wind this Championship, will surely come into Gatland’s thinking again this year.

But Ireland’s back-row depth is equally enviable, 2013 Lion Sean O’Brien returns from injury to start against Scotland with CJ Stander – so impressive in his first Championship last year.

They face Ryan Wilson and Hamish Watson from Scotland who caught the eye in the autumn and have displaced previous incumbents John Hardie and John Barclay.

Just as intriguing however is the decision to shift Itoje to the blindside flanker – a position he has never started in for England and only six times for his club Saracens since 2014, and he will line up alongside Northampton Saints skipper Tom Wood.

Both Billy Vunipola and Taulupe Faletau are unavailable through injury but even so the No 8 coffers are remarkably full for Gatland to gaze upon.

Two-time Lion Jamie Heaslip leads the charge for Ireland in the Scottish capital where he takes on Josh Strauss.

Nathan Hughes made his England bow in the autumn and impressed in Vunipola’s absence against the Wallabies but will be making his RBS 6 Nations debut on Saturday.

Wales meanwhile continue with the powerful Ross Moriarty who was one of the Wales players of the autumn and has shown his versatility by featuring both on the flank and at No 8.

Scotland and Ireland will bring firepower off the bench at BT Murrayfield.

The verve of Mark Bennett and experience of John Barclay and Ross Ford will be key for Vern Cotter’s men while two Lions in Cian Healy and Tommy Bowe will boost Joe Schmidt’s men.

For England both James Haskell and Teimana Harrison are on the bench with no specialist lock cover but Jack Nowell and Ben Te’o will test French defences when introduced.

And Wales have a two-time Lion in Jamie Roberts waiting in the wings along with exciting playmaker Sam Davies who only made his debut in the autumn.