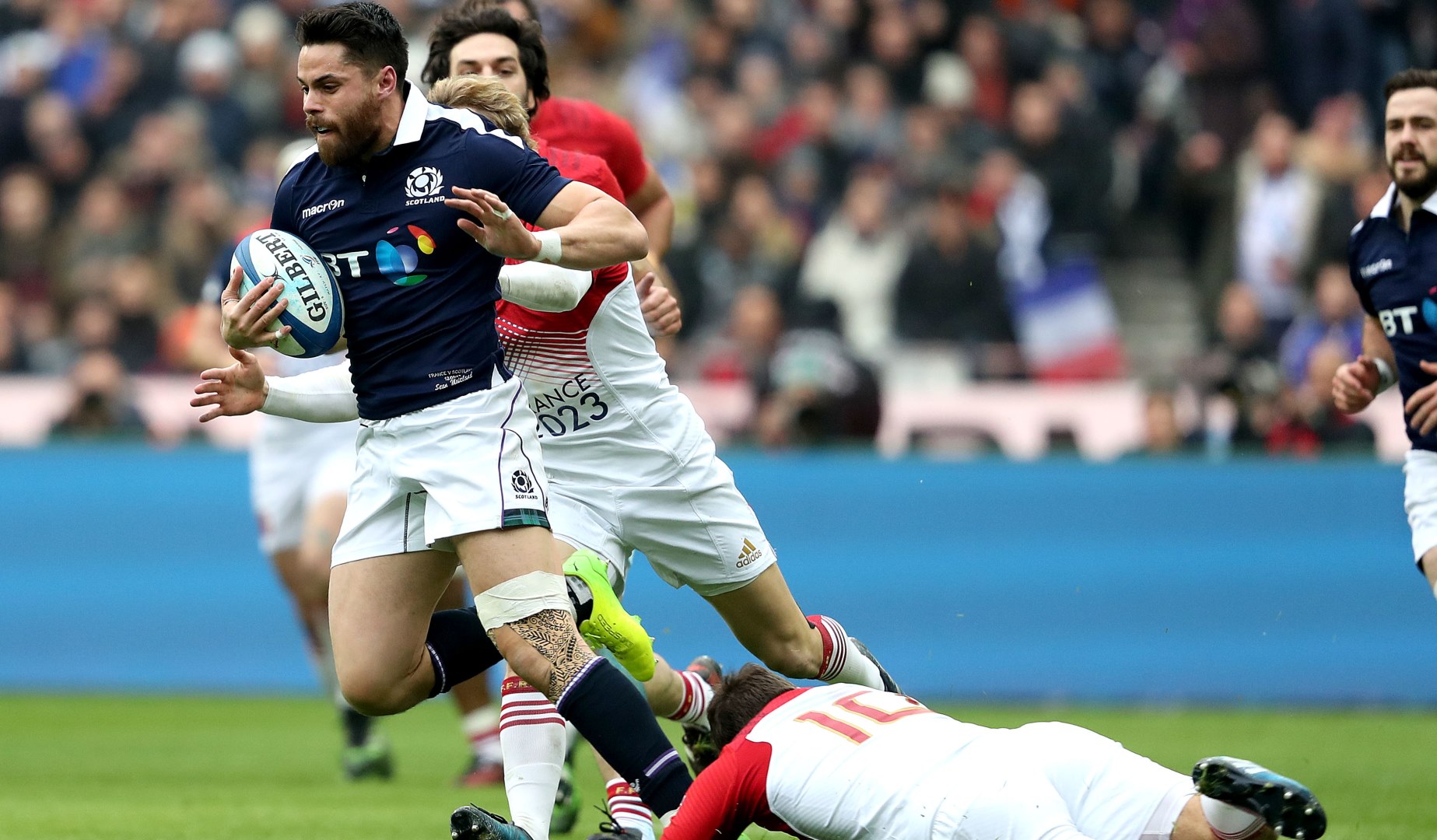 Scotland’s brave attempt to secure their first ever RBS 6 Nations win in Paris fell just short on Sunday at the Stade de France.

Despite losing the likes of skipper Greig Laidlaw and flankers John Barclay and John Hardie to injury, Scotland outscored their hosts two tries to one in a bruising encounter.

Stuart Hogg scored their first and Tim Swinson their second but Gael Fickou’s first-half try for Les Bleus and the boot of Camille Lopez proved enough to give the hosts a 22-16 victory.

But with a British & Irish Lions Tour to New Zealand coming up later this year, Warren Gatland will have liked what he saw in the French capital.

Stuart Hogg’s try double proved vital last weekend in downing Ireland in the Championship opener – and he was at it again on Sunday.

The full-back – winning his 50th cap for his country at the age of only 24 – extended his individual lead at the top of Scottish RBS 6 Nations try-scoring charts with another fine score.

The full-back finished the game with 81 metres made – more than any other Scot – from nine carries, beating five defenders and in the first half his key play saw him dart over in the right corner to put Scotland in front.

The full-back – a Lions tourist in 2013 who did not break into the Test team – added two clean breaks and was narrowly off target with a booming long-range penalty in the second half as the game got tight.

Injury to skipper Laidlaw was always going to be a big blow for Scotland but they coped admirably in his absence.

Ali Price impressed in his stead at scrum-half while Finn Russell took over the kicking duties, as he does for his club side Glasgow Warriors.

And while a Gael Fickou try put France out in front in the first half, the fly-half chipped into the lead before the break with two penalties.

And then the fly-half showed his sleight of hand in the second to set up the away side’s second try of the afternoon.

Replacement Swinson was introduced in the unfamiliar position of blindside flanker as both Barclay and Hardie were forced off.

But his first touch was a special one to put the visitors back in front and dreaming of a first win in Paris since 1999.

? Tim Swinson scores his first international try at the start of the second-half in Paris #AsOne pic.twitter.com/rl889b8CHm


A fine Hamish Watson turnover won the ball back and Russell’s sweet offload then released Tommy Seymour down the right.

The winger’s chip and chase bounced in his favour and when he regathered Swinson was over for a fantastic score – although Russell’s hurried conversion miss was a surprise.

For the majority of the second half, France were dominant but it said a lot about Vern Cotter’s side that Scotland’s try line remained unbreached after the interval.

There were a number of key contributors but the midfield pairing of Huw Jones and Alex Dunbar deserve special praise.

Jones made ten tackles in Paris, more than any other back on both sides, and Dunbar was not far behind on nine – the latter also a constant nuisance at the breakdown with one first-half turnover particularly eye catching.

In the forwards hooker Fraser Brown returned to form in style with 15 tackles while in the second row Jonny Gray was at it again with ten of his own while his brother Richie made ten carries to try and relieve the pressure.

No 8 Josh Strauss managed 15 carries for 58m for Scotland as he set the tone for a Scottish forwards performance that more than matched their French counterparts.

After some initial struggles, the Scotland scrum shored up as well and won one huge penalty in the second half when France sniffed a decisive score.

Simon Berghan came on for his debut and impressed at tighthead prop in the set-piece while Brown was his all action self alongside him.

But in the end it was not enough and Scotland’s wait for two wins in a row to open up an RBS 6 Nations campaign goes on.