Paul O’Connell: My Lions XV from Championship Round Three

Paul O'Connell picks his top XV following the weekends action, with a number of performances and injuries to take into account there is a lot to take into consideration. [more] 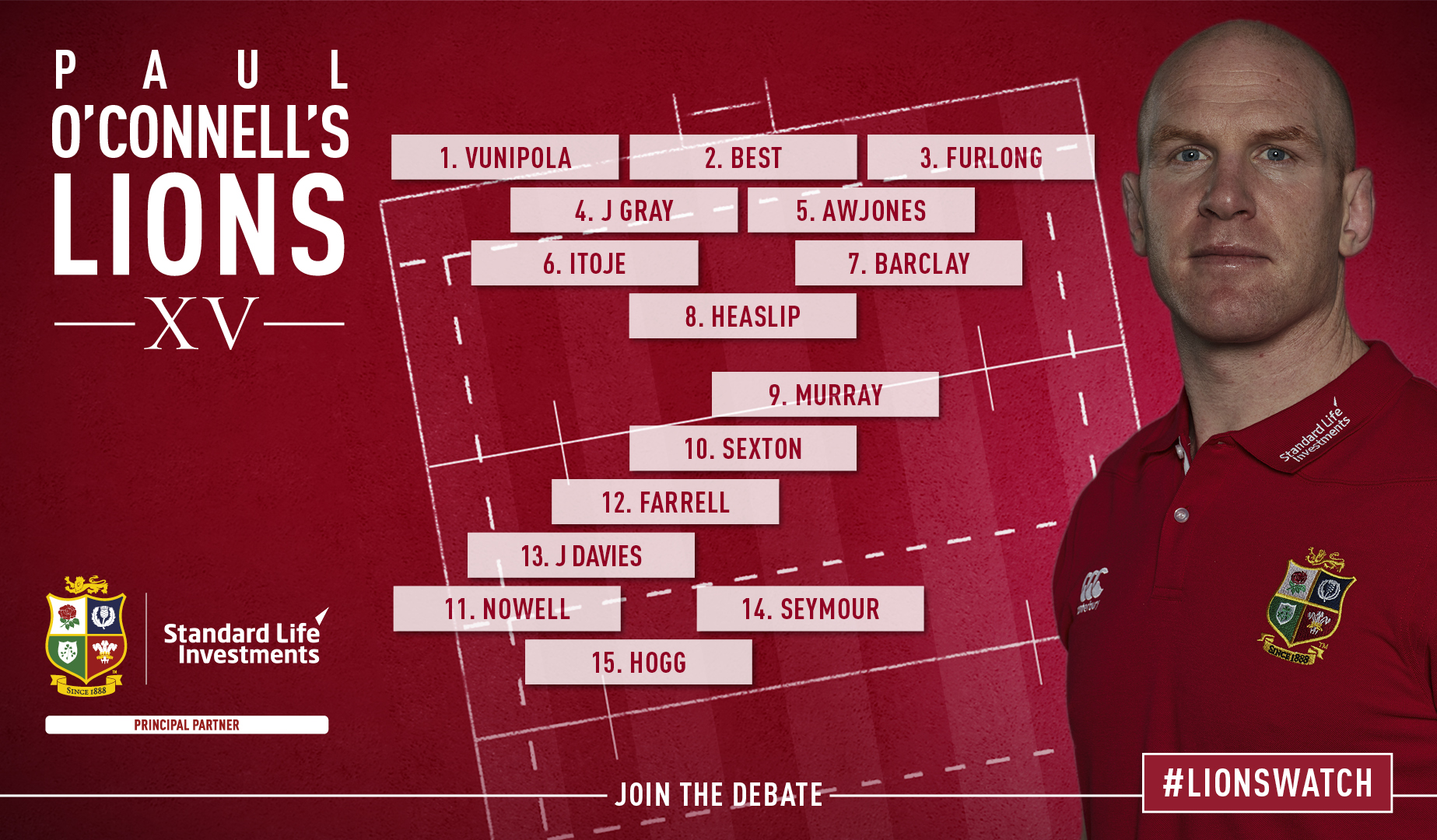 Paul O’Connell picks his top XV following the weekends action, with a number of performances and injuries to take into account there is a lot to take into consideration.

Scotland are becoming a very strong side and a real contender in this year’s RBS 6 Nations.

They make themselves very hard to beat, they clear their lines and have a great kick chase and then on top of that they have that bit of magic in their side.

Stuart Hogg has been fantastic so far and with Finn Russell at fly-half playing so well, it was a phenomenal comeback against Wales.

I actually thought Wales played pretty well but every time they made a line break they failed to capitalise and gave the ball back to Scotland – and that cost them in the end.

Ireland have bounced back very well from the loss to Scotland. I was in Ireland on Saturday night and I can tell you it was very wet! So to see off France in what was ultimately a comfortable win was a fantastic result.

Then on Sunday England fought back well to see off Italy. Maybe they have not been at their best this Championship but they still have some phenomenal players and some of their second-half tries were sensational.

I was surprised it took England so long to work out Italy’s tactics in the first half – you have to applaud the Azzurri for their innovation even if I don’t necessarily agree with what they did – but England got there in the end.


15. Stuart Hogg – Scotland
For me, Stuart has been the Player of the Championship. He has got it all and is playing with real confidence. He was probably just a bit young when he came on Tour with the Lions in 2013 but he is coming into his own this time around.

14. Tommy Seymour – Scotland
I have seen a lot of Tommy this year with Glasgow and he has been in fine form. He has got a great kick chase and most importantly scores tries.

13. Jonathan Davies – Wales
He may have finished on the losing team but he played well again for Wales this weekend – and made one superb line break. He’s a fantastic player who impressed under a lot of pressure in the final Lions Test in 2013 and is improving all the time.

12. Owen Farrell – England
Owen is a phenomenal goal-kicker who is right at the top of his game at the moment, he can do a bit of everything. He drives the team forward, organises people around him and leads by example. To have won 50 caps by the age of 25 is an amazing record.

11. Jack Nowell – England
That was a great cameo off the bench on Sunday. When I watch him for England and Exeter I am always impressed with how he can step in at first receiver and play. He may not be the fastest but he has great energy and power that more than makes up for it.

10. Jonathan Sexton – Ireland
It was great to see him back for Ireland this weekend and – provided he can stay injury-free – he will be a key figure for the Lions in New Zealand. He ran the show for Ireland and slotted a drop goal for good measure.

9. Conor Murray – Ireland
Conor has been playing excellently for a while now. On Saturday against France it was more of an old-school performance, kicking to the corners and keeping France penned in on the back foot. He also showed good strength to score a short-range try and instinctively knew how to close the game out.

1. Mako Vunipola – England
Mako came off the bench for England on Sunday and it was good to see him back in action. He can’t be fully fit yet but when he is, he is a very important player for England and the Lions. We need ball players in every position when we go to New Zealand and Mako is certainly that.

2. Rory Best – Ireland
Rory is the complete package at hooker. He is a great leader, and great scrummager and excellent at lineout time who should be a real asset for the Lions on Tour later this year.

3. Tadgh Furlong – Ireland
Tadgh was really thrown in during the summer tour to South Africa last year and since then has played New Zealand and Australia and started all three games of this year’s Championship and has never been found wanting.

4. Jonny Gray – Scotland
Jonny has been a machine for Scotland and for Glasgow this season. He is already captain of his club side and he gets through an enormous amount of work.

5. Alun Wyn Jones – Wales
He will have been disappointed on Saturday – particularly with the lineout penalty on Scotland’s line – but it is great to see him playing so well. He is the fittest second row I have ever played with and this summer will be his third Lions Tour. I learned a lot from him in 2009 and 2013 so I am sure the whole squad will this time around.

6. Maro Itoje – England
I could have had him in the second row but I thought he was excellent on Sunday. When the chips were down he kept coming up with big plays for his side. The guy is a phenomenal athlete.

7. John Barclay – Scotland
I have been very impressed with him since he has come back into the Scotland team. He’s tidied up his game at the breakdown, is a good ball carrier and a tall guy that makes him a good lineout option and he led from the front for Scotland on Saturday.

8. Jamie Heaslip – Ireland
Jamie does the simple things so well, the small stuff that very often goes unnoticed. He is a fantastic all-round player with a wealth of experience.