While it can stir the soul like no other game, every true fan knows that a rugby match is not always the most romantic of settings - but a pair of British & Irish Lions supporters first caught each other's eye across a muddy Welsh pitch. [more] 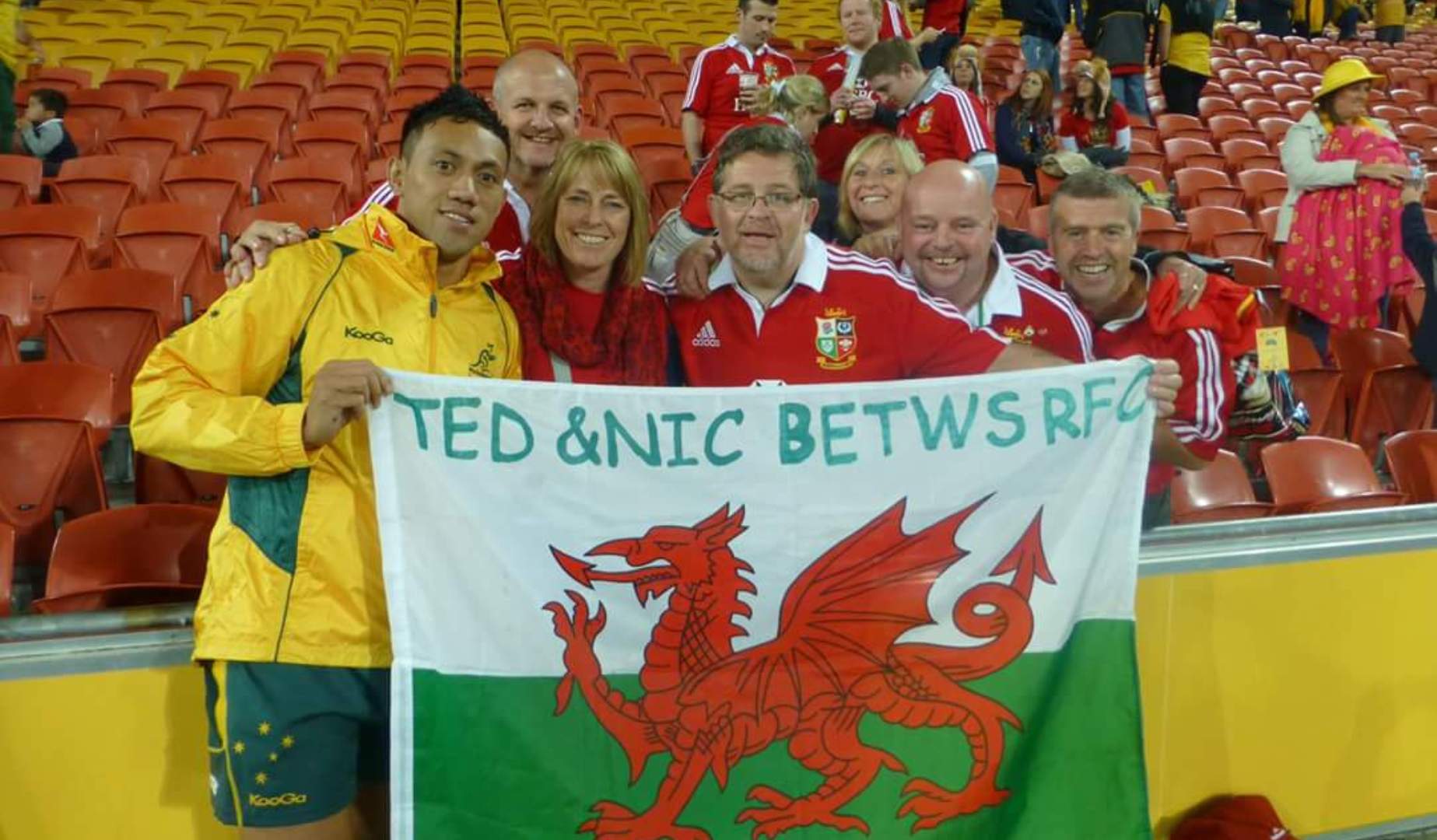 While it can stir the soul like no other game, every true fan knows that a rugby match is not always the most romantic of settings – but a pair of British & Irish Lions supporters first caught each other’s eye across a muddy Welsh pitch.

Andrew Williams, 51, and his wife Nicola, 49, married soon after that day and have since travelled the world watching rugby – including the 2013 Lions Tour to Australia.

Andrew, a former loose head prop for Welsh club Betws, and Nicola will be jet-setting again this summer as they travel to New Zealand to watch the Lions once more.

And 2017 brought an early present with the news that they won The British & Irish Lions’ Valentines Competition – where contestants tagged their partners into a social media post and told their most romantic rugby story.

And few stories are more romantic than the Williams’- who met in 1994 and have been married for 21 years.

Andrew and Nicola take a snap with Lion Scott Quinnell

“We are over the moon to win. A friend encouraged us to enter and thankfully we have won – it is one of those things you never expect to win but we did,” said Andrew.

“It was a nice surprise. It is a funny story and whenever I tell it to my friends they always comment on what a romantic story it is.

“It was love at first sight, definitely.

“Betws were drawn in a Welsh Brewers Championship match in mid-Wales against Llanidloes, about an hour-and-a-half away.

“I was loose head prop scrummaging against a big tight head called Malcolm. I had a big fat lip at full time because someone punched me.

“We went back to the rugby club and Malcolm introduced me to this girl called Nicola. Two weeks later she called our rugby club and she said, ‘Can I speak to the fat prop with the big fat lip’?

“After a while we got together. And a year later we got married – it is a fantastic story.”

The prize sees them win a £100 gift voucher to a restaurant of their choice and a Lions jersey each.

Rugby has played a major role in their relationship and, with a trip to New Zealand already booked, it will continue to do so.

Andrew, who served in the Royal Navy, and Nicola have made friends all over the world watching their favourite sport and they will be in Napier for the first Test with a mixture of New Zealanders, Scottish and Irish fans.

“We have followed Welsh rugby all over the world and we have just got back from their RBS 6 Nations clash with Italy, we have followed the Rugby Sevens team in Hong Kong and, of course, toured with the Lions in 2013.

Andrew and Nicola have watched rugby all over the world

“Rugby has played a key part in our marriage and my vegetable patch even backs on to a rugby field!

“It is a big part of the local community and, of course, throughout Wales.”

And the Lions’ eagerly anticipated Tour to New Zealand is next on the horizon, as Warren Gatland’s side attempt to win back-to-back Tours after their 2-1 success over Australia in 2013.

“We are watching the first Test in Napier with friends and there will be lots of Welsh flags there.There are English and Scottish going, so it will be great fun,” Andrew added.

“Touring with the Lions is something you have got to do at least once in your life. To be with the other home nations and see and feel how rugby unites people is fantastic.

“We got to meet Warren Gatland four years ago, which was amazing. It staggers me how open, polite and down to earth he is. He is just like a coach of a local rugby club.

“And that is what is so nice about the Lions.”

News
Previous story The ultimate endorsement – BOD gives seal of approval to Fan XV
Next story LionsWatch: Bowe back on the bench in only Ireland change for Wales