Martin Johnson: My Championship XV from Round Four

Martin Johnson picks his top XV following the weekend's action, with a number of performances and injuries to take into account there is a lot to take into consideration. [more] 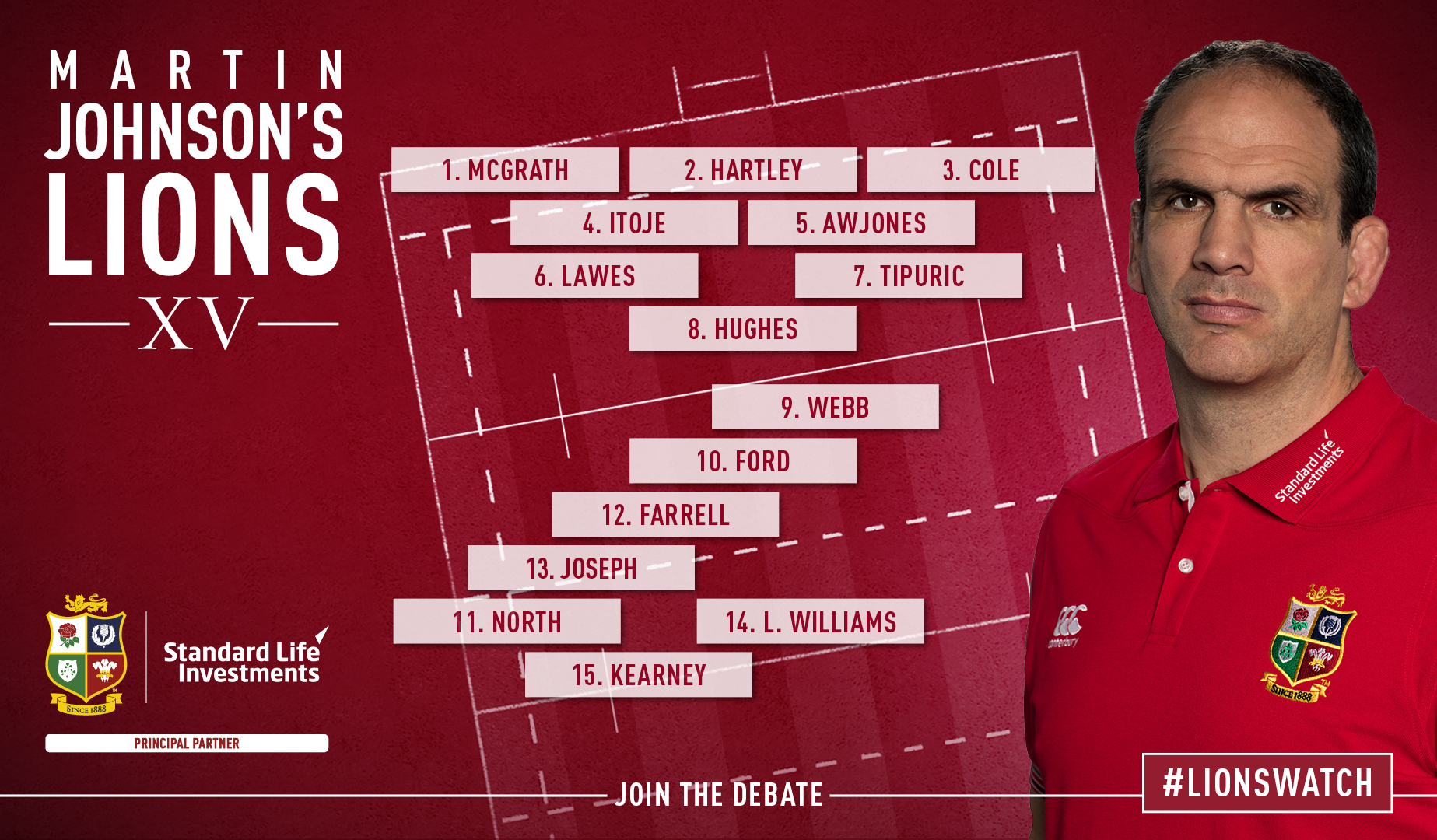 Martin Johnson picks his top XV following the weekend’s action, with a number of performances and injuries to take into account there is a lot to take into consideration.

Winning back to back RBS 6 Nations is a fantastic achievement by Eddie Jones’ England.

I said before the game that England had won three from three but it was actually Scotland getting all the praise as they arrived at Twickenham.

That must have rankled with the England players and the coaches, no matter what they said in the press, and with that perfect motivation and preparation they came out and answered a few critics.

That was just one of those games that got away from Scotland. I only played a couple of them in my career where the game was gone early on and they are very strange matches – it was almost a bit of a shame that the game was not more competitive for longer.

Yes, Scotland went down to 14 men early but you should be able to handle that, the injuries didn’t help with people out of position but England scored three very similar first half tries and that was that.

Vern Cotter’s team were exposed in midfield and England executed really nicely. Jonathan Joseph will get the plaudits but it all comes off nice ball from Courtney Lawes at the back of the lineout, Nathan Hughes being used a couple of different ways as a decoy, Owen Farrell was even at scrum-half for one of the set plays.

Scotland needed to make them go outside you and trust their scramble but England went right through the middle, and when that happens you are dead.

In the end this maybe was not the best preparation for Dublin. As a forward in particular you are used to a battle of blood and thunder, fighting for every inch.

But on a day like that England just knew they had to give it to the backs and they would do the rest– that is a very different game to the one they will face in Dublin.

For Ireland, they cannot win the Championship but denying England a Slam might mean just as much to them.

Their loss to Wales on Friday was a real slog-fest with two teams both really going at each other hammer and tongs but a couple of bits of good execution from Wales made all the difference.

Often those big games come down to the smallest of margins. That driving maul when Robbie Henshaw infringed will have frustrated Joe Schmidt, certainly it would have angered me because they had done 95 percent of the work but I suppose by the letter of the law it was correct.

That was the whole of the game there, if Ireland had scored that try the game is very different. But you cannot really argue with three tries to nil in Wales’ favour – the team that scores the most tries more often than not wins the game.

15. Rob Kearney – Ireland
The England back three didn’t get that many opportunities, mainly because the England midfield did most of the damage, but Wales against Ireland was a very different sort of game and Rob Kearney did really well in a losing cause. He was great in the air, he made some good runs and did everything Ireland could have asked of him.

14. George North – Wales
He took his tries very well, George is a big strong boy and it’s important that he plays like it. He is a phenomenal athlete and you want him carrying hard and barrelling over defenders. That lifts your teammates around you and does the exact opposite to your opponents.

13. Jonathan Joseph – England
You cannot pick anyone other than JJ can you? If you have got the skillset that he possesses then you need to bring them to the party and in the first few games he maybe didn’t quite get those opportunities, you look at a game like the one in Cardiff for example. But after that showing he has to be on the plane to New Zealand. As the ground gets firmer guys like him are just lethal – really you want to be playing him in ankle deep mud!

12. Owen Farrell – England
Owen’s combination with George Ford is now one that every team in world rugby needs to be aware of, and one that Warren Gatland will have to look at as well. Just take those three first-half tries as an example, the way they dovetailed was fantastic. The way they executed simple skills, straightening up defenders and putting people into gaps was effortless.

11. Liam Williams – Wales
Jack Nowell maybe didn’t get on the ball as much as he would have liked and I could have picked Anthony Watson here but Liam Williams did really well for Wales in a tough, tight game. Sometimes you are not going to score tries and you don’t get good chances, then it is about doing every other part of your job well and he did that.

10. George Ford – England
Jonathan Sexton has been playing well, he tried almost everything to get Ireland back into that game in Cardiff but it didn’t quite come off for him while George and Owen cut Scotland apart, on current form how can you not pick the two of them for the Lions?

9. Rhys Webb – Wales
Ben Youngs did nothing wrong but I have been really impressed with Rhys all through the tournament. Against England and Scotland he was a little livewire and he has shown that he is always alive to opportunities down the blind side. If you pick your moments down the short side, there is always easy yardage to be made. He did very well to set up North’s two tries, for the first one he showed a nice long pass of his left to beat the Irish cover and for the second because it is hard to get the ball off the forwards when a maul is going forward like that.

1. Jack McGrath – Ireland
It would be easy to pick the England guys here as well and Joe Marler did really well. But Jack McGrath had some really nice touches around the field for Ireland and their scrum was pretty solid. If you watch the detail you see that he nicked a couple of balls and in a losing effort did very well.

2. Dylan Hartley – England
There’s not much between the hookers at the moment but Dylan led from the front again so probably has to get the nod. The scrum was OK but the lineout continued to be very slick and he hit Courtney at the back to set up their first-half scores.

3. Dan Cole – England
Dan just always does his job, week in week out. Maybe they lost one scrum against Scotland but Dan has been the cornerstone of this England team under Eddie Jones and they keep on winning.

4. Maro Itoje – England
He might be wearing the No 6 on his back but make no mistake about it, Maro is playing in the second row and that is where I am picking him for the Lions. He scrummages at second row and really that is the only difference nowadays between a lock and back row. Everywhere else their jobs are the same and in the lineout players have been moving around for years. He was just fantastic again against Scotland. In a game where it might have been easy to slack off with the match already won, he never let his intensity drop, making big hit after big hit and leading by example.

5. Alun Wyn Jones – Wales
I thought that Alun Wyn played really well in Cardiff against Ireland and showed what a world-class lock he is. Even when Wales have not looked at their best in this year’s Championship, he has been great, leading from the front and rallying his troops.

6. Courtney Lawes – England
The combination with Maro Itoje has brought Courtney Lawes back to his best. I thought he was great in Cardiff and against Scotland  he was possibly even better. His lineout work was impeccable while he also carried very strongly, getting England over the gainline even when the ball was given to him without much momentum. Someone like Sam Warburton is an openside playing on the blindside and Lawes you could argue is a lock playing on the blindside, but it doesn’t matter about the number on your back really, you just want to get the right balance of different players’ strengths.

7. Justin Tipuric – Wales
As mentioned above, this was a difficult day for some England players to get in this team as the game was already over. James Haskell did nothing wrong but, without being too harsh on Scotland, he didn’t have to do too much. Meanwhile, Justin Tipuric was absolutely everywhere for Wales. There were guys like CJ Stander, Sam Warburton and Sean O’Brien on show in Cardiff but I thought Tipuric was the pick of the back rowers in that game.

8. Nathan Hughes – England
Guys like Ross Moriarty and Jamie Heaslip showed up well but Nathan probably had his best game in an England jersey. He was right in the middle of the action, some it as a decoy runner, and did what he needed to do as a big powerful ball carrier.