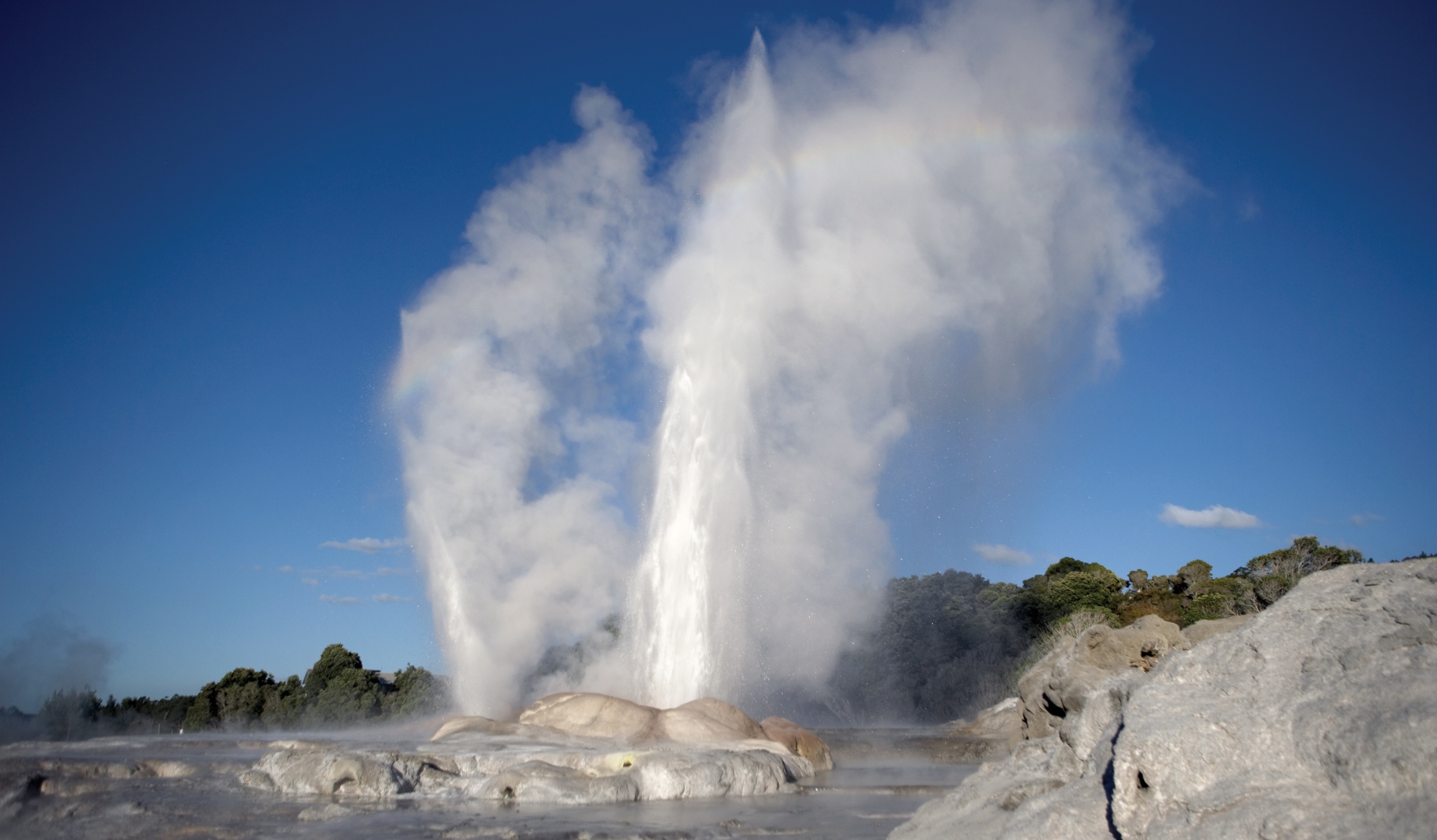 Week five of our series takes us to the Sulphur City, Rotorua.

With a population of under 60,000 Rotorua’s largest industry by a considerable margin is tourism, making it the perfect destination for those looking to enjoy near Test-level rugby against the New Zealand Maori as well as a spectacular array of activities.

People have been travelling to see Rotorua’s thermal pools and geysers since the 1800s and with over three million visitors arriving each year, it is clear that its appeal has yet to dim.

The Pohutu Geyser at Whakarewarewa will never cease to amaze and with a population that is over one-third Maori, it is the perfect location in which to imbibe the indigenous music, legends and arts.

From Dunedin in the South and the Forsyth Barr Stadium – where the Lions take on the Highlanders in their fourth match of the Tour – it is a fair journey to the heart of the North Island.

But for those following the Lions, any journey North will be more than compensated for by Rotorua’s many delights.

If you only have time to attend one geothermal site during your time in Rotorua, then the general consensus is that Waiotapu is the one to go to.

Though it is 27 kilometres south of Rotorua, the dazzling array of colours and geothermal pools are completely unique.

Within the area, you can see the phenomenal explosions of Lady Knox Geyser, Champagne Pool, the other-worldly Artist’s Palette, Primrose Terrace and a series of boiling mud pools that will take your breath away.

The area can be fully explored on foot via three different walking routes, there are a plethora of information boards to ensure your experience is a well-informed one and you will be left with some spectacular photographs.

If the sulphurous smell of the thermal pools is too much, then the sublime Whakarewarewa Forest is just five kilometres south of Rotorua.

Home to a breath-taking system of suspension bridges that allow you to walk among 22 Californian coastal redwoods to get a unique perspective both of the undergrowth and the gigantic trees.

Whether your preferred mode of transport is on foot, by horse or mountain bike, you will find the ideal venue at Whakarewarewa.

Tamaki has received more awards than any other tourist attraction in New Zealand and from the traditional dancing, music, Hangi cooking and the chance to stay overnight in the village, it offers a comprehensive insight into Maori heritage.

Perhaps the most daunting opposition outside the Test arena await at the Rotorua International Stadium – the Maori All Blacks.

The Maori though – who have beaten the USA and Fiji over the past two years – have enjoyed huge success across the globe, winning the Churchill Cup in 2004 and 2006 and can count greats Sid Going, Christian Cullen and Zinzan Brooke among their alumni, as well as current All Blacks Dane Coles and Tawera Kerr-Barlow.

Coached by Colin Cooper and skippered on their most recent tour by Highlanders and Hawke’s Bay hooker Ash Dixon, they claimed their 70th win over a full international side when they overcame USA 54-7 in November.

Blues back-rower Akira Ioane impressed with two tries against the Eagles and is another who – if he is not in All Blacks contention – could feature against Gatland’s men.

Two-cap All Black Damian McKenzie, in superb form for the Chiefs in Super Rugby and Leinster-bound back James Lowe are another two who made their mark during that fixture against the Eagles who could be ones to watch when the Lions roll into Rotorua.

After winning their first-ever fixture with the Maori All Blacks in 1930 19-13 at Wellington’s Athletic Ground, the Lions would go on to enjoy a 75-year unbeaten streak against the native side.

The Lions were victorious against the Maori – again at Athletic Park – in 1950, at Eden Park in 1959 and 1966, as well as a powerful 23-12 victory on the historic 1971 Tour, John Dawes and co turning a dominant display in their sixth Tour match.

Further victories followed in 1977 and 1993, but as with all great runs, the Lions’ record against the Maori had to end at some point when in 2005, the Lions lost out 19-13 to a Maori outfit including Piri Weepu, Carl Hayman, Rico Gear, Leon MacDonald, Jono Gibbes and Marty Holah in Waikato.

At the Rotorua International Stadium itself – dubbed the ‘hang pit’ after the popular Hangi Maori cooking technique – the Lions enjoy another distinguished record, remaining unbeaten in Sulphur City.

The Hang Pit is, along with Tauranga’s Baypark Stadium, one of NPC side Bay of Plenty’s homes and it staged the official Lions welcome in 2005.

Josh Lewsey laid down an early Test-match marker with a two-try performance in a 30-24 win against Bay of Plenty in the same year, while Mark Cueto, Tom Shanklin, Gordon D’Arcy and Dwayne Peel also crossed.

When the Lions arrive in Rotorua in June next year, there is a chance that one of Rotorua’s most successful rugby players will be part of Gatland’s squad and not preparing to face off against the Lions.

Dylan Hartley may be England’s most capped Test hooker and currently riding the crest of a wave as part of a side on a world-record 18-match unbeaten run, but he was born in Rotorua.

The England skipper attended Rotorua Boys High School – as did England flanker Teimana Harrison – before moving to Sussex in 2002.