Your Club Your Lions: Dorking RFC

British & Irish Lions are like buses for Dorking RFC. [more]

British & Irish Lions are like buses for Dorking RFC.

The club has been in existence for 91 years, based at its Brockham home since 1972, and up until April 19th did not have one tourist to its name.

But when John Spencer read out the names of both Elliot Daly and George Kruis at Syon Park, confirming Warren Gatland had selected the English pair in his party of 41 to tour New Zealand this summer, the celebrations could get underway at The Big Field.

Dorking now has two proud Lions to call their own, and club coach Mike Dobson believes both players’ inclusions were richly deserved.

“My eldest son was George’s second-row partner at Dorking, and my younger played with Elliot so I had a fair bit of interaction with both players,” he said.

“The club were of course delighted to see both selected, although we weren’t surprised!

“Once both players established themselves for England we thought they were shoe-ins for the Lions anyway.

“The club is making a lot of noise about it as we are very proud; the clubhouse will be open for all the Lions’ games and I am hopeful both our lads will be on the TV.”

Dobson coached 2017 Lions Daly and Kruis during their time at the club, with both players flourishing in Dorking colours.

Daly, who was also playing both rugby and cricket for England at the time, as well as for school behemoths Whitgift, enjoyed a three-year stint at the club through to under-16 level.

And while England coach Eddie Jones cheekily describes him as the perfect public schoolboy who has been ‘blessed with talent’, Dobson insists Daly’s hard work was the real catalyst for his success.

He said: “Elliot was 13 years old when he came to us at Dorking, and he was already a very talented all-round sportsman, not just rugby.

“I was worried he was going to go down the cricket route to be honest but I’m so glad he didn’t in the end. It sounds very clichéd but he was very dedicated even at that age, and would be out there with his dad [Martin] practising all the time.


“His dad was probably his biggest influence, his mentor, and worked constantly with him – he’d be kicking before and after training.

“Elliot was always a very physical player, and if he made a mistake he would be desperate to put it right. The next person who caught the ball would be tackled extremely hard!

“We wanted to get his hands on the ball, so generally we played him at inside centre, but he could play ten if needed and was brilliant wherever – I remember one match against Warlingham where he completely and utterly dominated, pinning them back with his kicking.”

FROM THE PACK TO THE WING, AND BACK AGAIN

Daly’s brother, Miles, played in the same under-17 side as Kruis – who Dobson says is a Dorking boy through and through.

The Saracens lock plied his trade in Brockham all the way through minis and juniors rugby before progressing to the first XV, and was part of the team that won the RFU under-17 National Cup in 2007 – a star-studded side that also included Wasps prop Jake Cooper-Woolley and England cricketer Jason Roy.

“George was something else when he was here,” added Dobson. “They didn’t know where to play him when he first started – one week he’d be on the wing, and the next he’d be in the pack!

“But he was someone who just really started physically growing when he got to 16 and he realised his potential at that age.

“He got into Surrey and went from there to England, but he was definitely a later developer – Stuart Catton coached him and Armand Roux was his captain in the first XV, and both helped him a lot, especially when he was looking to go to Saracens.

“George’s parents both still live in Dorking and his elder brother Henry still plays at the club for the third XV.

“So he pops down whenever he gets the chance. He was at the club longer than Elliot, from nine up until 18 years old until Saracens snapped him up, so he has a huge friendship base here.”

Hard work off the pitch has seen Dorking surge up the English ladder in recent years, reaching National League 2 South after the 2013-14 season – their highest promotion to date.

Relegation back to National League 3 London & South East last term has not dented the club’s enthusiasm, with the side in a transitional phase under new director of rugby (and Kruis’ first XV skipper) Roux.


But all eyes will be on the duo this summer in the land of the long white cloud, and Dobson admits the club is hoping to add to its blossoming collection of international jerseys.

He said: “We’ve got one of Elliot’s shirts hanging on the wall at the club at the moment, and two of George’s England shirts, but we’re hoping we might get our hands on a Lions one soon!” 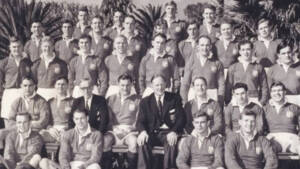 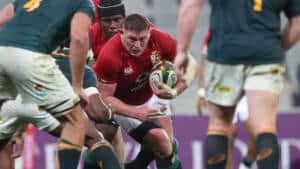