Ken Owens reveals all about life on Tour with the Lions

Find out what’s on Ken Owens’ iPad, what it’s like having most of his close family out on Tour with him and whether there are plans for a career in commentating after he hangs up his boots. [more] 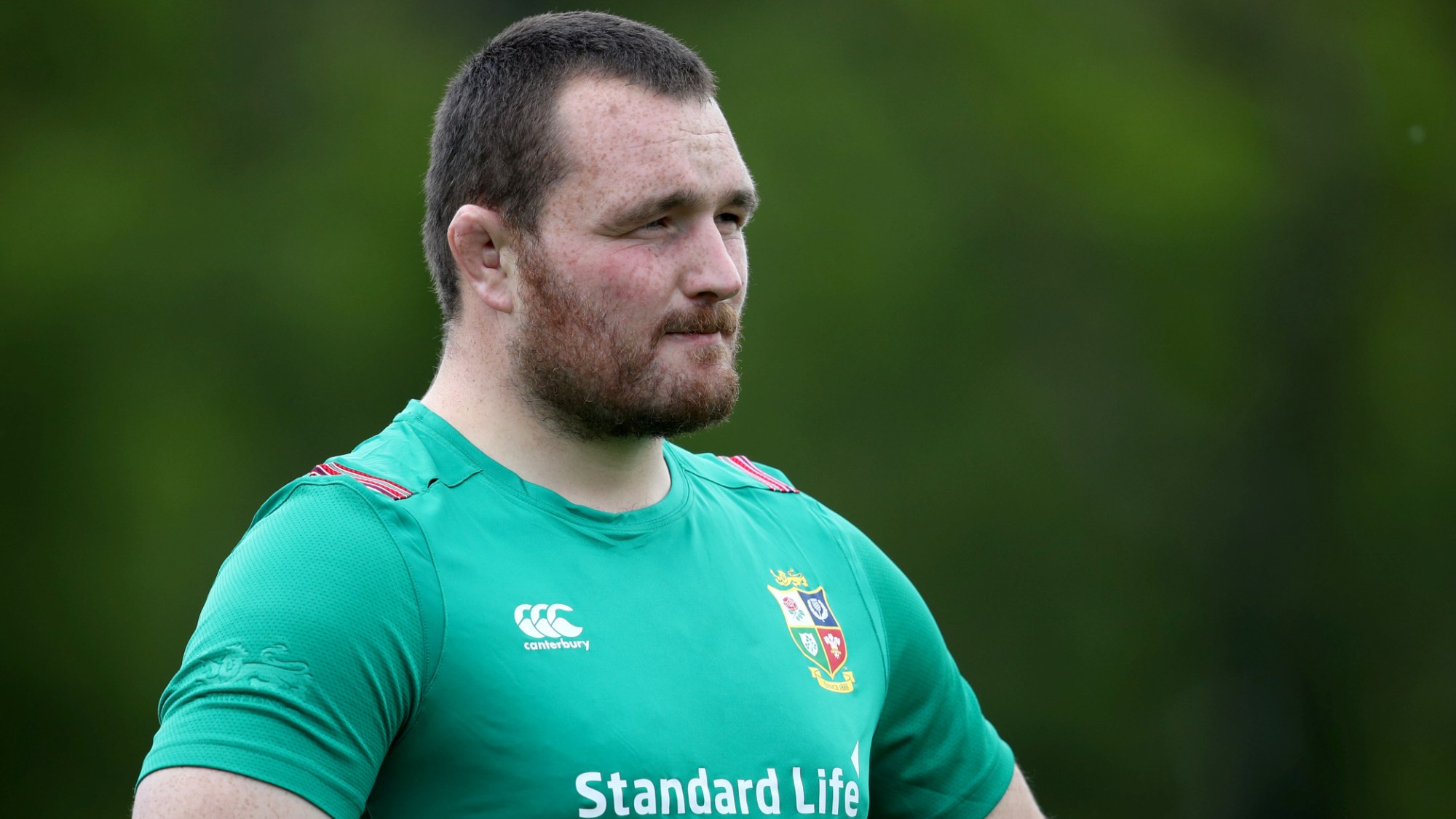 Click here to read Joe Marler’s Q & A on life in training camp, here for Robbie Henshaw’s interview on his birthday and here to find out why Jamie George has finally let his parents buy a Lions jersey.

Below is a sit-down chat with Wales hooker Owens, as he prepares for the Lions Test series against the All Blacks.

Q. Hi there Ken, am I right in saying that your family are out here on Tour with you as well?

A. My parents Delme and Frankie and my wife Carys and son Evan are all out here for the six weeks and then my sister and some other family friends are coming out for the Test matches. It’s one hell of a trip but you have to remember it is a once in a lifetime opportunity for them as well, to come and watch me play so it was a no-brainer. My mother was my grandfather’s main carer up until recently but he passed away and she hasn’t gone back to work yet so she was free, my wife starts a new job when we get back and my old man has his own business so they were all available to come which has been great. I’m sure the boys back at home who work for Dad weren’t too happy though!

Q. That must make it even more special to have them in the crowd for your games?

A. Of course it does, especially my son Evan who is only two. He won’t remember a lot of this but to have those pictures and memories forever and to be a part of this Tour is hugely special. And in the Christchurch game they let me bring him out on the field so he could have a walk. A lot of people have made a lot of sacrifices to put me in the best possible position to get here and it is only right that they get to enjoy it as well. I have been lucky to be here before, but they have been some nice places and been travelling the south island in a campervan. 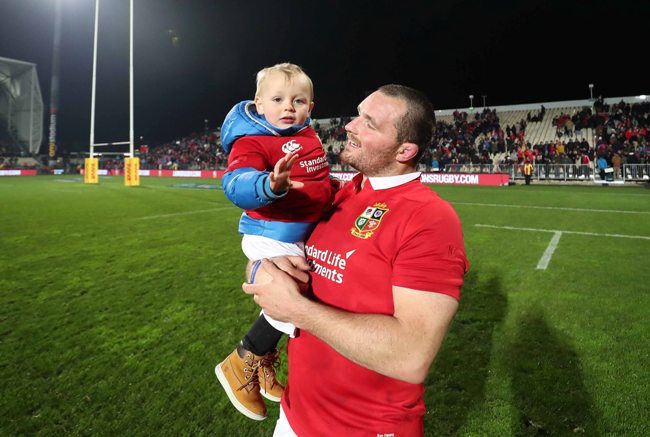 Normally the day of the game or day before I get to spend with them but they are travelling around, doing a bit of sightseeing so each week is really two separate paths before we meet on matchdays. They have got to do a lot of culture, it’s a beautiful part of the world. I am lucky that I have done New Zealand before so I have seen a lot of the sites, but in Dunedin we went down to the beach to St Clair which was lovely, and in Christchurch we did a bit of a tour to try and understand what has happened to the city after the earthquakes – and that was pretty inspiring to see how everyone is just getting on with it and re-building their lives from scratch. Everyone has been so welcoming and warm which has been quite humbling, to experience that welcome in Waitangi as well – with my family there – was incredible – I have had some Maori welcomes before but never anything like that.

Q. Have you kept hold of all your jerseys on this Tour, or have you been going into the opposition changing rooms after games to swap them?

A. I have swapped my jersey after every game, you get two so I obviously keep one but it is special for some of these guys to get to play against the Lions, speaking to Delme Thomas (who toured three times with the Lions in 1966, 1968 & 1971) he told me they only got two jerseys back in the day for the whole Tour. But i think that tradition of swapping jerseys is very important.

Q. And that is something Warren has been very big one hasn’t he?

A. Even when we are with Wales, Gats says it’s very important and I think you lose a bit of that with professionalism  – with the emphasis on travel, and recovery and short turnarounds – but I think it’s great for rugby to keep its core values – meeting the opposition and having a beer. We talk about rugby of course but it’s everything else, finding out where they are from and things like that. We need to keep that, it separates us from all other professional sports. Playing for the Lions is a huge honour but for those guys playing against us it is a massive achievement – they only get to do it once in 12 years.

Q. So did you have a nice catch-up after that Blues game with James Parsons then, you were both captain on the day?

A. Yeah it was great, there was a fair bit of banter on the pitch but afterwards he was great – that is the first time I have met him having watched him play quite a in Super Rugby. To spend ten minutes having a chat, swapping shirts and getting to know your opposition is great.

Q. Tell me a bit about that day, leading out the Lions against the Blues at Eden Park then?

A. It was magical, especially considering about two or three weeks before I was quite nervous about not making the Tour at all.

Q. Was there a point where you thought ‘I am not going to make this Tour?’

A. Deep down, yeah possibly there was! But I always tried to keep a positive mindset because you will aid your recovery that way. There were a couple of moments where I was not sure but the work Prav Mathema and Eanna (Falvey) have done has been brilliant, the work of Prav especially – I cannot speak highly enough of them and the work they have done to get me over here, and when Gats asked me to be captain it was a terrific moment. It’s real honour for me but also for my family, and everyone who has contributed to getting me to this point and leading out the Lions was fantastic , I was just disappointed we didn’t get the result, but to follow in the footsteps of some great names is amazing. 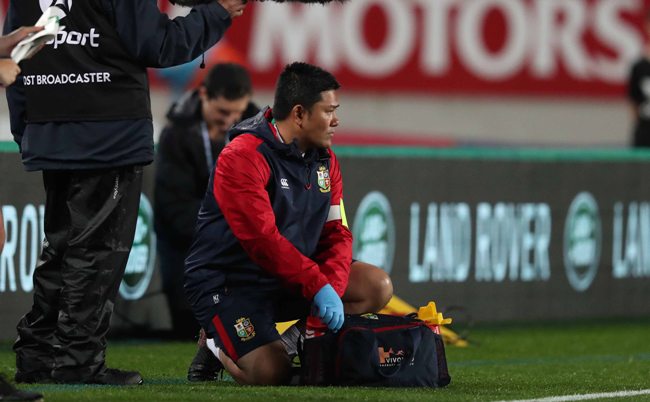 Q. You have done a bit of commentary out here as well no? Is that a post-career plan?

A. The first game of this Tour against the NZ Provincial Barbarians I actually commentated for Radio Cymru, but I have been on the bench or started the next four games so have not been able to do it again. The commentary is possibly something I would like to do after my career – it is always an option. Because I am a Welsh speaker that is a bit of a string to my bow with that type of thing, we only have three Welsh speakers with Jon Davies and George (North) on the Tour, so I have been doing some stuff with Gareth Charles from Radio Cymru – commentating in Whangarei was good. Gareth is a great bloke and I have done some stuff with him before, it’s a good experience, something a bit different, and maybe post rugby you never know. I don’t do much practice in my own time, but you learn as you go along and that first game of the Tour went alright, but I need to brush up on my Welsh language and make sure it is up to scratch.

Q. And being a current player affords you a level of insight that other commentators possibly can’t have?

A. For the people at home I think it gives a good insight from a player’s perspective, especially a current player – they can tell you things, perhaps about how the team are trying to play, that is different to what you usually get.

Q. Is there anyone on this Tour that you have really bonded with that you didn’t know before? I suppose being a roommate with someone helps in that regard?

A. I have had some great roommates, mostly with the hookers actually. Obviously I have got to know Rory quite well over the years but it has been great to meet Jamie (George), get to know him and we have all learned off each other. I have also been in with Peter O’Mahony, he and I have had some massive battles over the years on the pitch with Wales and Ireland – but we have all got on so well. To a man everyone has been fantastic and getting to know a lot of these boys has been a pleasure.

Q. How do you pass the dead time on Tour, in airports and hotels?

A. I haven’t been too bad, I do have a couple of old programmes on my iPad for the plane so I am watching all of Sherlock at the moment and then there are a couple of films.  Twin Town and Mike Bassett England manager are my go-tos – absolute classics. But I have been trying to stay in the team room, getting out and about as much as a I can and not stay in my room, I want to be a bit more sociable – that is what this Tour is all about. Coffee is a good way to bring the lads together as well, I do enjoy a coffee – I am not into it as much as some of the lads but I like an Americano – or a long black as they call it out here. Some of the lads love it, and can make patterns and everything, it has become a bit of a topic in the team room and most of the boys are teaching each other – George (North) is good, Elliot Daly made me a nice one the other day and Hask thinks he is pretty good!

Q. This is the pivotal moment for the Tour really isn’t it? This is when you want everyone to rally round?

A. This is a huge time, with a week to go to the Test. But there is no split in the squad and there never has been. Everybody got a start but there will come a point when the decision has to be made but speaking to the lads and knowing the characters within the squad, everyone will be right on the money because there is a massive role in the team, if you are not selected, to provide quality training sessions and anything can happen, you are one injury away. It will have to be a full squad effort to provide everything for the Test 23 to perform on that Saturday.

New Zealand News Wales
Previous story Stander: I would play all ten games if I could
Next story Haskell: We must give it our all against the Chiefs