‘Living With Lions’: Fred Rees remembers the making of the groundbreaking 1997 documentary 20 years on

Today marks 20 years since The British & Irish Lions stepped out against South Africa in Cape Town to compete in the first Test of an historic Tour. [more] 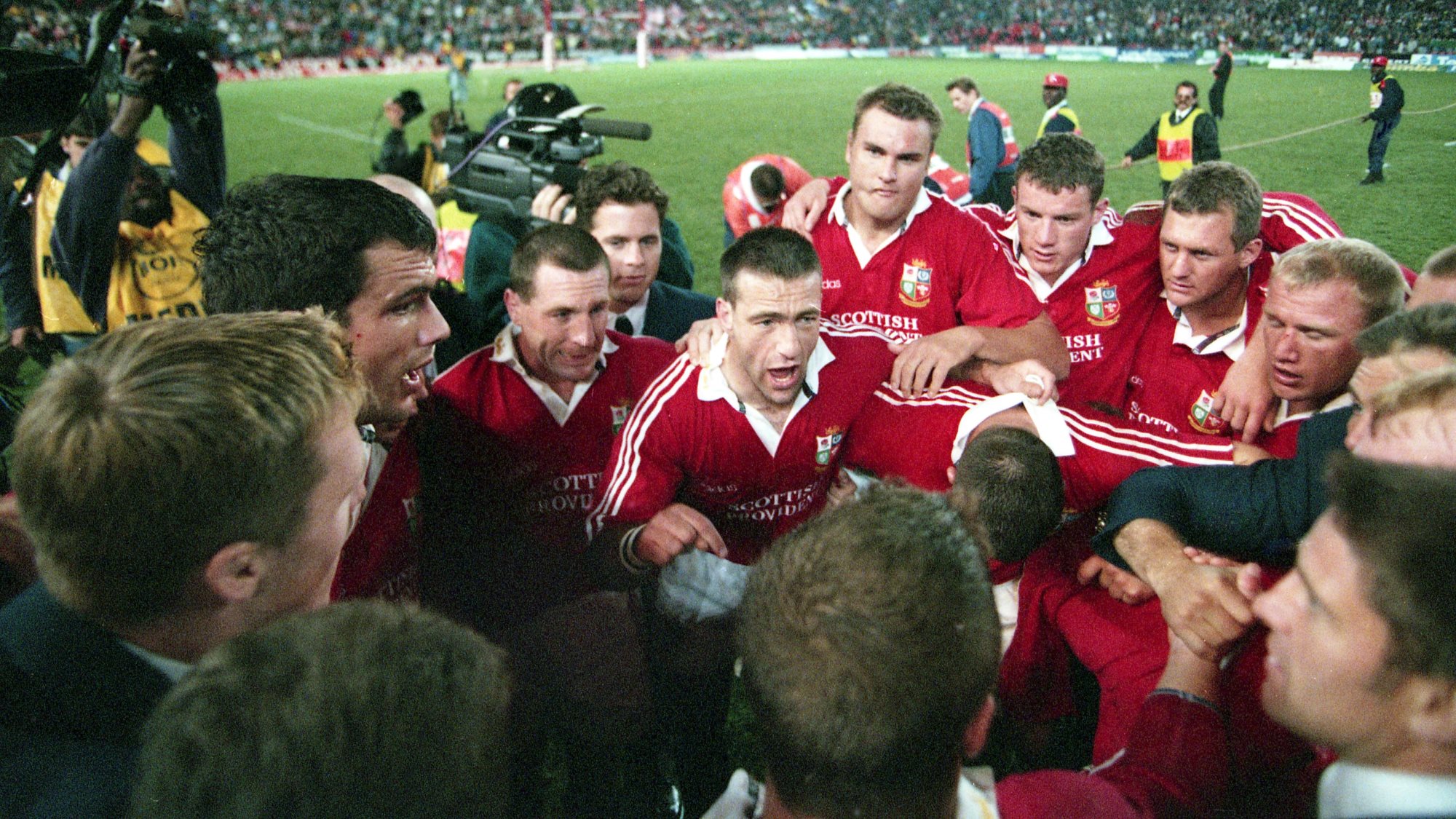 While the Lions were to triumph 2-1 in the Test series, the Tour is also remembered fondly in the hearts of rugby fans across Britain and Ireland thanks to the documentary ‘Living With Lions’.

Watch the documentary Living with Lions on Amazon!

The film, shot behind the scenes throughout the training camps and the Tour itself, became an instant cult classic – and to this day stands as a guide for how to run a successful Lions Tour.

And 20 years on, director Fred Rees reveals all about how the film became a hit and the inspiring stories behind the iconic documentary.

Q. Hi Fred, take us back to the very start and tell us how the idea of filming a fly-on-the-wall documentary about a Lions Tour came about?

A. Duncan Humphries (cameraman and director) and I used to meet at the ‘Star & Garter’ pub in Soho round the corner from our office and we’d sit there, drink beer and talk about rugby endlessly. About six months before the Tour – and after a few beers – we thought if we could pull off a fly-on-the-wall documentary about the Lions it would be pretty special. And in a sort of semi-drunken enthusiasm we decided we’d give it a shot. The filming company said to us if we gave them £30,000 we would have the right to make the film. We could then go to the TV companies with the rights and get them to stump up the money. They all said we were bonkers, they thought the Lions would get absolutely tonked because the South Africa were the world champions, they’ll lose every game and there won’t be a film in it. So we then found ourselves thinking ‘Oh my god, we have just risked £30,000 and unless we stump up the money ourselves the whole thing would flood away over the cliff.’ So we borrowed the money against our assets and basically chucked our house on the line.

Q. And how were the players to film? Was there any apprehension amongst the ranks?

A. I think there were times when the players realised how much we had risked and that did help get respect from them. The players were slightly wary of us, a few of them didn’t want us to be there with the cameras. In the end it really was a classic fly-on-the-wall film, because we didn’t socialise with the players. We were in a limbo between the players and the journalists. We filmed the stuff where they had to behave in a natural way because they were in a meeting or training or in a dressing room. So we ended up blending into the background. At the very end after we made the film we had a screening up in Soho for the players and after the film to a man they were coming up to us saying, ‘hold on, you weren’t in that room’ – which I guess is quite the tribute in a way that we managed to blend into the background. 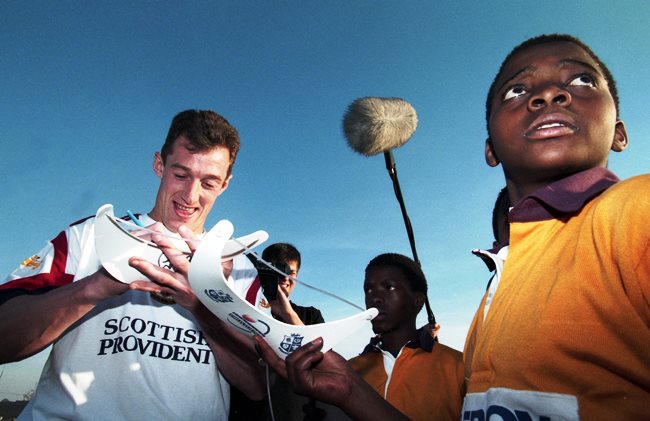 Q. There must’ve been a few characters in the team, was there anybody who you enjoyed filming the most?

A. We had John Bentley who was just great. At the beginning at the team-building event we explained to John what we were doing and he said, ‘guys there’s no way you can make a fly-on-the-wall film about a rugby tour, the boys won’t let you.’ He suggested that some of the boys do some of the filming which worked really well because he was a real character and he was pretty funny. He recorded some magical stuff and added humour to the film. He helped capture another side to the tour that maybe we couldn’t have done. I think because it all felt so very real, that’s the reason why people really like it – we didn’t recreate anything and it was completely genuine.

Q. Are there any personal standout moment on what was an incredible tour?

A. There are many. Jim’s ‘Everest’ speech before the first Test was pretty magical. I think when we recorded that we knew it was pretty incredible stuff. There were other moments on the tour as well. I was in the in the dressing room after they lost their first game, and their next match against Gauteng Lions was crucial to get the tour back on track. Geech (Ian McGeechan) was inspiring the boys and John Bentley was just lying on this massage table so I did a slow zoom into him because he looked just so intense and didn’t bother filming Geech. And lo and behold he goes and scores one of the best tries of the Tour and gets the Lions back on track, that was pretty magical. After that, filming him coming off the field and the rest of the team in the corridor all cheering, that was just remarkable.

Q. Filming the first pre-match dressing room speech proved a bit trickier than first thought. Would you say getting to film Jason Leonard’s speech was make or break for the film?

A. We had everything on the line and then we got to that moment and they told us you cannot be in the dressing room. They didn’t want anything to distract from that. We spoke to Fran Cotton and said ‘you need to get us into this dressing room.’ Then Fran spoke to Jason and said we really need to do this so we were in. What then happened was the players just got so lost in what they were doing they didn’t notice this tall guy standing in the corner. When we looked back at that footage after the game of all the studs bouncing up and down on the floor and the players psyching themselves up we knew we had something pretty amazing. I think it was definitely a make or break moment for the film, and luckily for us we had the guts to stand up to it. 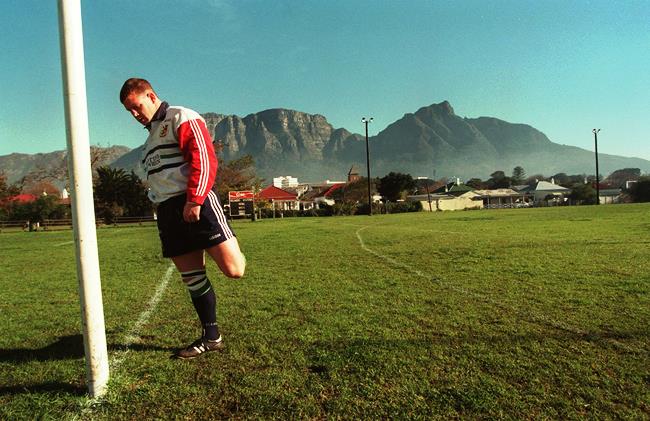 A. The point he made was that you are doing it for the people that have helped you get here, like your PE teacher or your family or whoever has put you in that place. That was really emotional and pulled the strings for sure. Ian’s speech was such a moving thing, he put so much heart into it and he really meant it. With Jim Telfer and Ian there was no ego involved, it was all about the players and they loved the players. If Ian had turned around and said to me ‘half the team is out with the flu, here’s a jersey, run out there’ I would’ve run out there. Even with the knowledge that I would’ve been dead in 30 seconds, I still would’ve done it because he was so inspiring.

Q. The reaction to the film was incredible; did you know it would take off like it did?

A. It was an amazing privilege. When we made the film, we insisted there would be no voiceover and no interviews. A lot of people were saying we needed to interview players but didn’t do it and we stuck to our guns, and I think it’s an important factor into why people like the film so much. That’s a really important ingredient; it is a film that puts you in a situation that is as close as you can get to being in the Lions squad. We did not expect the reaction we would get. But it has been amazing and a joyous thing to have various people come and tell us how much they loved it. One guy once told me he owned thousands of films, and above his television he has his five favourite films of all time – our one was right in the centre, which was lovely.

Q. It’s 20 years now since you guys were making the film on Tour, how does it feel now looking back?

A. It was a fantastic honour to do it and what’s also nice is that the film has inspired a lot people. The film gets quoted by so many players and lots of players have said they watched it and said ‘I must be a British & Irish Lion’. Duncan had been filming a commercial with Brian O’Driscoll and when he found out he had made the film, Brian just shook his hand and said ‘thank you so much, because that film had such an effect on me.’ So it’s those things that are great when you find them out.