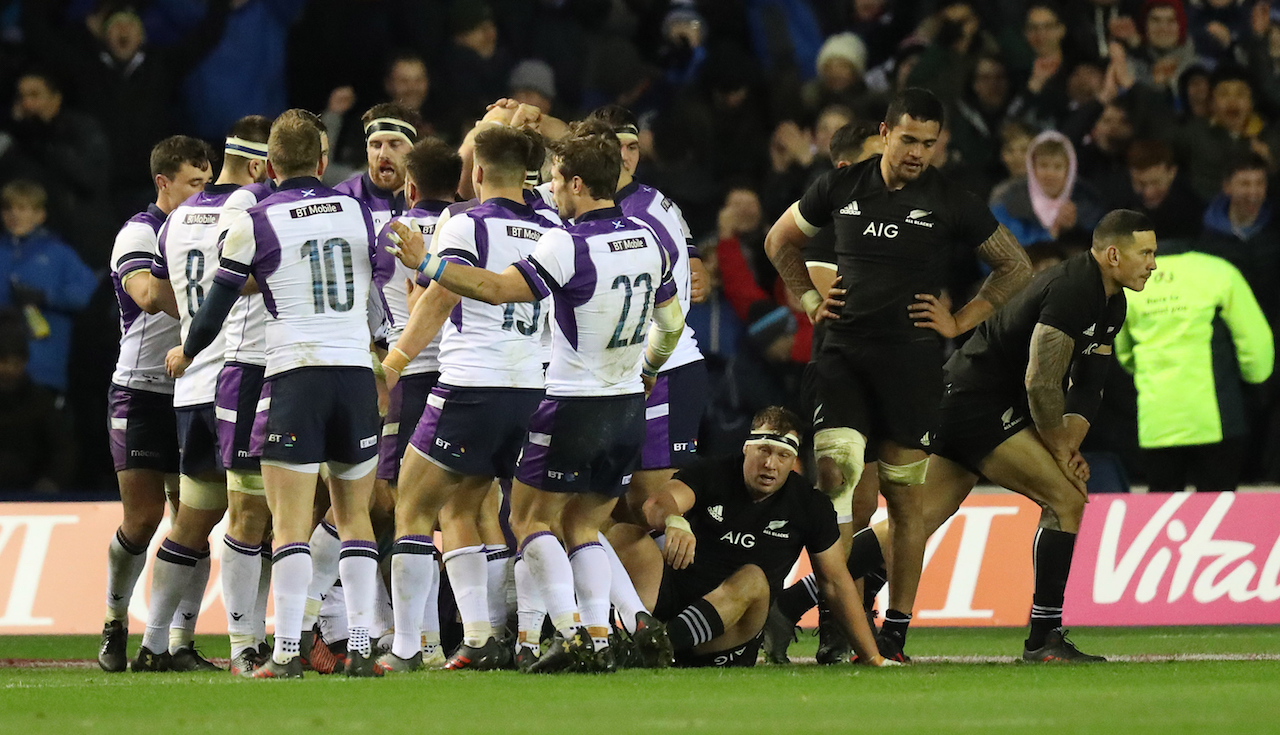 It was an exciting day of rugby for the Home Nations with wins for three out of four teams in Round Two of the Autumn Internationals while Scotland put in a superb performance but just fell short of what would have been an historic victory over New Zealand.

With fourteen changes to the starting XV from last week, Wales struggled for rhythm at times during what was a hard-fought encounter.

Wing Hallam Amos crossed for the only try of the match putting the hosts 10-3 ahead at half-time and there were a couple of opportunities missed that would have extended that scoreline even further and put the hosts in a more comfortable position.

A penalty put Georgia within touching distance and set up a tense second 40 minutes.

In the second half, Wales called on their Lions experience bringing Dan Biggar on at full-back, and Taulupe Faletau in the pack.

Georgia threw everything at the hosts in pursuit of a draw which would have been one of the greatest results in their history but ultimately, Wales were able to hold out and secure a 13-6 win.

There was high emotion before the match as the great Scotland and Lions forward Doddie Weir was announced onto the pitch prior to kick-off. Weir, who announced recently that we is suffering with Motor Neurone Disease, was given a huge reception by a packed house at Murrayfield.

Weir, along with every other Scot watching, would have been filled with pride after a rollercoaster match that almost saw the Scots down the current world champions.

The hosts got off with a flying start and with a penalty awarded just six minutes in, Finn Russell converted and put the hosts in the lead 3-0. But discipline at the breakdown cost the Scots with a converted penalty for New Zealand.

Russell made an attempt for the drop-goal at half but time fell short, and the scores were level at just three apiece at the break.

New Zealand pushed clear after the break. Hooker Codie Taylor taking Rieko Ioane’s and finding the whitewash for the first try of the match. A second from Damian McKenzie quickly followed.

Scotland did not to let up though.  Playing the ball with pace and precision, they put the All Blacks under pressure, and New Zealand were given two yellow cards as a result.

Taking advantage, Jonny Gray finally got over the line after sustained pressure with Russell converting.

New Zealand responded again however, and this time it was Beauden Barrett who weaved through for his team’s third try, which he converted himself.

Scotland refused to yield. A grubber kick from an in-form Stuart Hogg was gathered by Seymour and offloaded to Huw Jones for another try to set up a pulsating finish.

With just seconds on the clock, Scotland almost engineered a potential game-winner as Hogg turned on the afterburners and roared through a gap. But the All Blacks cover was equal to it – just – and held out for a hard-earned win.

England took on the Wallabies in Twickenham in extremely difficult conditions with rain pounding down in London throughout. In the end, England secureed their fifth consecutive win against Australia, and did so by a record margin.

England held possession for most of the first half but were able to find the line. Thanks to two penalties from Owen Farrell, they led six to nothing at half time.

It was 6-3 with thirty minutes remaining, Australia having withstood an extended peroiod with overlapping yellow cards and just 13 men on the pitch.

The visitors came close to taking the lead but Michael Hooper’s try was chalked off for offside after he slid over. Shortly after, Marika Koroibete also had one taken away by the TMO – obstruction the cause in this case.

It wasn’t until 54 minutes in that the match saw its first try, Elliot Daly showing guts and pace to chase down a clearing kick and dive over for a match-turning score.

A second Lion, Jonathan Joseph, got England’s second showing a true finisher’s instinct to slide over from distance in the wet conditions.

With the momentum rolling, England pulled away with further tries from Jonny May and Danny Care to rack up a record total.

A young Irish team staved off defeat to a highly compettive Fiji team. The match tightened up considerably by the end  despite Ireland having a healthy 17-3 lead in the early proceedings after tries from Darren Sweetnam and Dave Kearney.

Fiji’s traditional attacking brilliance saw them get back into the game, Nemani Nadolo breaking away with a chip and chase timed perfectly to find Henry Seniloli who crossed the line. A superb intercept try from Timoci Nagusa, the brilliant wing’s pace doing the rest, brought the Fijians back into the hunt levelling the score 17-17.

Penalties from each side the brought stakes up to 20 all but it was Ian Keatley who would get the chance to nudge Ireland ahead with a final penalty and he duly did so to – just – give Ireland victory.