Jamie Roberts knows exactly where he was when his life changed - on a pier in Cardiff, listening to the radio in his car. [more] 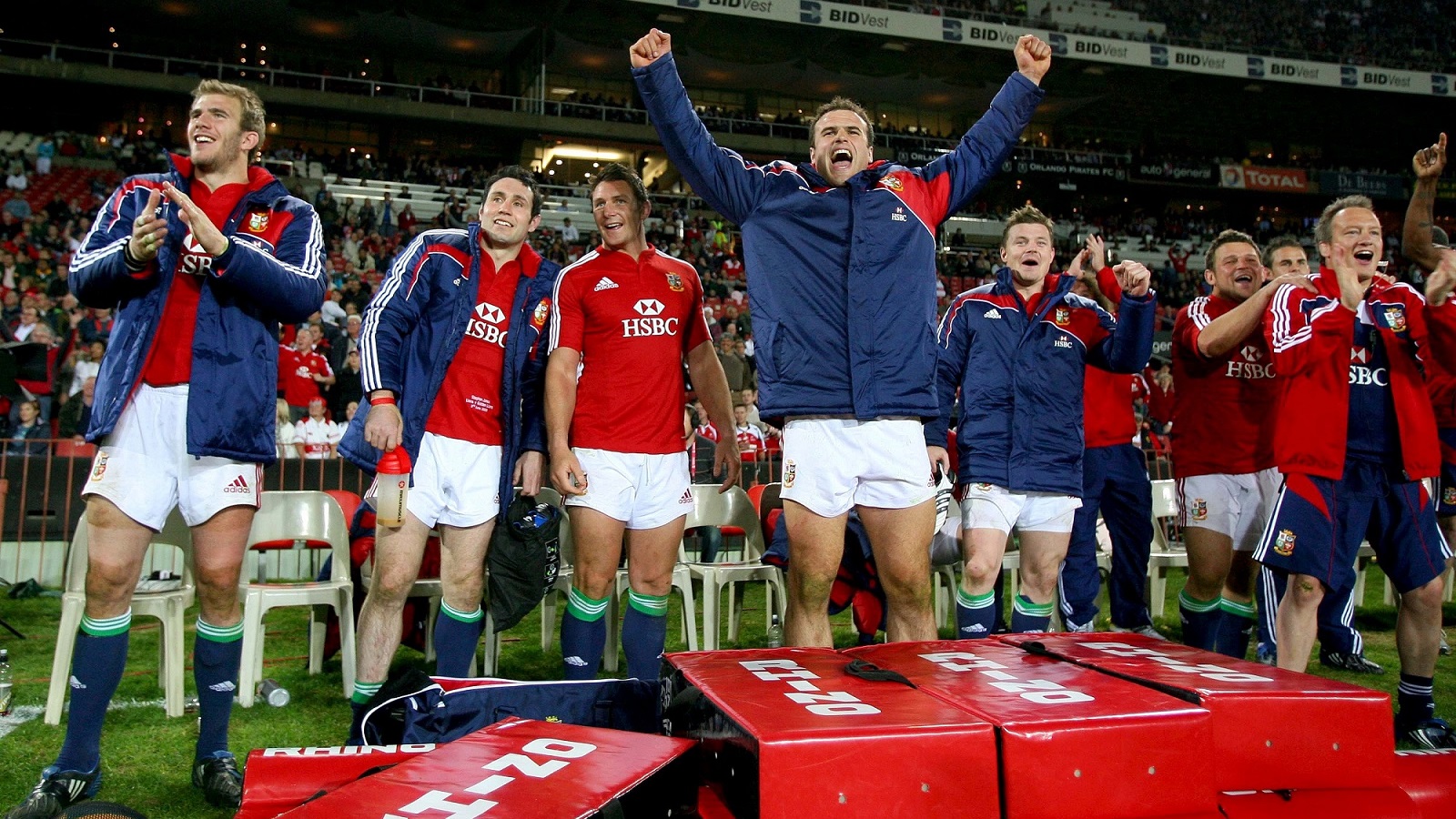 Sir Ian McGeechan was listing the 37 players set to accompany him and his coaching staff to South Africa for The 2009 British & Irish Lions Tour when he named a 22-year-old bruising Cardiff Blues centre. Roberts got out of the car and danced, before scuttling along the pier to buy an ice cream.

READ JAMIE ROBERTS’ BLOG ON VOLUNTEERING WITH THE NHS

What has followed has been quite a career, that’s still far from finished: three Six Nations titles, two Grand Slams, 97 Test caps and a British & Irish Lions series victory in Australia.

But still nothing compares to the summer of 2009, which started with a party in Pontcanna and ended with the Lions Player of the Series award in Johannesburg.

The 2009 Tour ultimately ended in a 2-1 defeat but that hardly tells the story. The second Test was arguably the most thrilling game of Test rugby that decade and McGeechan has described it as the best he has ever witnessed.

Add in Tom Croft’s first Test double, Simon Shaw’s debut at 36 and Shane Williams’ heroics in Johannesburg, all played out in front of an army of travelling fans wearing Lions red across the country and it’s no wonder Sky Sports were quick to replay the series on Saturday. Twice.

“The memories from the 2009 Tour are probably the fondest of my career,” Roberts said.

“It had a huge impact on my life. I remember going to Lord’s later that summer for the Ashes, I went to meet some friends for a late lunch and the whole stand got up and applauded me when I went down the steps.

“I thought it was just ridiculous. I have never experienced anything like that in my life and for it to come at a different sporting venue was so surreal. That Tour changed my life, changed my approach to the game and my understanding of the game. It has influenced what I have gone on to achieve in my career.”

And what a career it has been. Roberts has played for Wales 94 times, including 85 starts and was part of the Wales side that won the 2008 and 2012 Six Nations Grand Slams.

In 2013, he also played his part in one of Wales’ most famous victories – a 30-3 beatdown of England that saw them nip in and steal the title while also denying their great rivals a coveted Grand Slam.

Later that summer he was picked for a second Lions Tour to Australia, but by then he was one of the game’s premier centres. In 2009, his selection was something of a surprise.

“I was 22, a young man who had come onto the Test scene with Wales a year before and everything happened pretty quickly for me,” he said.

“I just remember being sat in the car with my best mate on the day, which was April 21st. And we sat there listening to the squad on the radio and it was just an unbelievable feeling.

“I got out and danced around like a little kid and treated myself to an ice cream! I had a party at my house that night in Pontcanna in Cardiff and invited all of my mates, and then also my PE teachers too.

“Those guys had played a hugely important role in my development as a rugby player and so I thought it was only right they came round to share a beer as well.”

He might not have expected to be in South Africa but Roberts grasped his chance with two hands. McGeechan made a point of telling his squad that reputations went out the window, you had to earn a Test place and everyone had the same opportunity.

Roberts hit the ground running, with two tries in a 74-10 victory against the Golden Lions in the second Tour match, and impressed alongside Brian O’Driscoll. Their combination of strength and subtlety made for an intriguing blend and McGeechan could not help but notice the fledgling midfield partnership.

They got the nod at centre for the first Test but, despite two Croft tries, South Africa were too strong and emerged 26-21 winners.

But it’s the second Test which will always live long in Lions folklore. Considered by many to be one of, if not the, most physical Test match ever played, the Lions matched the Springboks until Morne Steyn nailed an 81st-minute penalty from 55 metres to snatch a 28-25 win.

“I was one of the lucky few to experience the highs of winning a Lions series in Sydney four years later but the contrast between that high and the low we felt in South Africa after the second Test is vast,” Roberts said.

“It was a desolate dressing room. Five of us were in an ambulance and off to hospital: Gethin Jenkins smashed his eye, Adam Jones dislocated his shoulder, Brian O’Driscoll’s head was twice the size it should have been, Tommy Bowe had done his calf and I had my wrist.

“It was brutal. Still to this day, people talk about that game and I say it was the most physical Test I have ever played.

“Brian and I had a brilliant midfield partnership on that Tour. Our games just clicked and he’s such an easy player to play with, because of his class. It was great to be alongside him for two Tests.

“I got injured 15 minutes before the end of the second Test and then didn’t play in the third, which we won, so it was quite a surprise to win the Player of the Series. Mike Phillips is still gutted he didn’t win it! And he still takes the mick out of me to this day.

“I was in Durban four or five weeks ago with the Stormers, and I was showing the lads some photos of the Tour and try to impress upon the lads that when we came out of the changing rooms at Kings Park, the whole stand in front was red on that Lions Tour. It is something I will never forget.”

A Lions Tour is about so much more than just rugby. It’s the only time players from the four home unions throw their international colours to one side and unite in one common cause. The bonds forged last a lifetime.

Jamie Roberts lifts the trophy after the Lions beat Australia in 2013. INPHO.

“You don’t survive on a Lions Tour unless you open up and form relationships and get to know lads you will have never met before. And that’s what makes it so special,” Roberts added.

“You might have played against each other in the Six Nations but you buy in with the Lions. It is four teams coming together so you have to be sociable and it is reflected in the fans, to see them come together from the four nations really is incredible.

Roberts’ rugby journey since has been varied. He’s played in four different countries, for six different clubs and is currently with the Stormers in South Africa.

But in the background, he’s also studied for a medical degree – graduating from Cardiff University in 2013.

His love of rugby has kept it on the backburner for seven years but now he is putting it to good use, volunteering to help the NHS fight against coronavirus and working with the Cardiff and Vale Health Board.

The first three days have been busy and am witnessing first hand another level of work ethic,attitude and resilience by people in extraordinary circumstances. The machine that is the NHS is remarkable

Roberts travelled back from South Africa when the country was put into lockdown last month and immediately submitted his CV. He’s spent the last two weeks helping to promote the good work NHS workers are doing. His blog has more than 25,000 page views.

“I am sitting on a medical degree and I have a medical background, so I wanted to volunteer,” he said.

“This is a once-in-a-lifetime event and it has been fascinating to see how people are adapting. It is a huge crisis and we are only going to solve it together as a collective.

“What I have seen is just how dedicated the staff are here and how hard they are working in difficult circumstances. It’s amazing to see everyone come together and I hope to help in whatever I can.”

Even off the pitch, Roberts is doing what he does best: making a difference.

Feature News South Africa
Previous story 2005 First Test: Who was in the Team?
Next story Lions Moment: How Brian O’Driscoll made me fall in love with rugby