Feature: A Lions captain, Scotland great…and my uncle – the story of Mark Morrison

I grew up in the 1970s and, like many small boys, I dreamed of playing rugby for Scotland. [more] 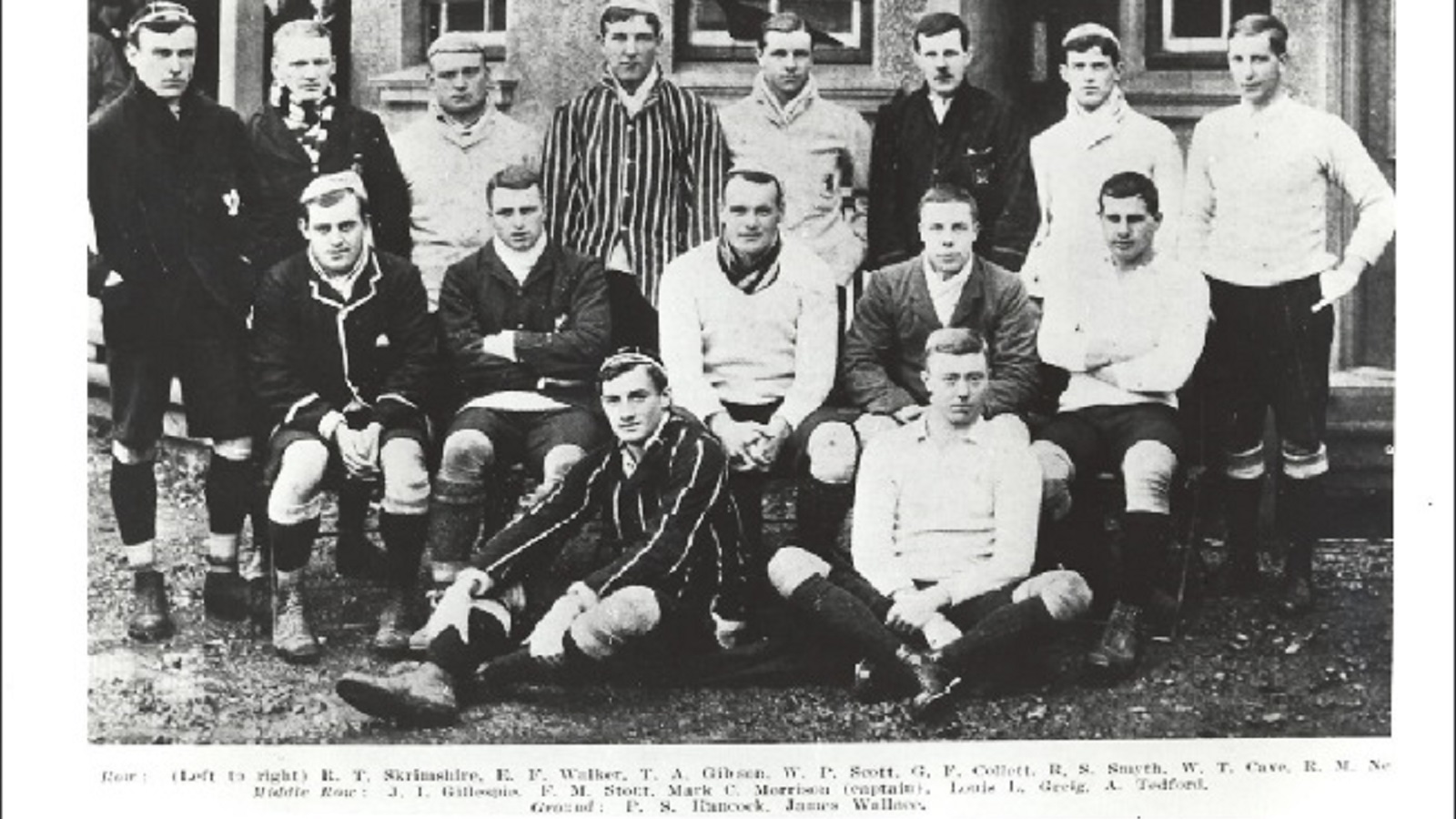 The only difference between me and the other hopefuls was that my hero wasn’t found amongst the likes of Andy Irvine or Jim Renwick, ‘Mighty Mouse’ Ian McLauchlan or Mike Bigger, all of them leading lights of the Scotland squad at the time. Instead I had a homemade hero I sought to emulate…. “Uncle” Mark Morrison.

One of the greatest players Scotland has ever produced was my grandfather’s uncle and stories of “Uncle Mark” were passed down the Morrison generations with all the loving reverence accorded to any precious family heirloom.

Mark Morrison led a British Isles team (before they had been dubbed “the Lions”) to South Africa in 1903 and lost the series 1-0 after drawing the opening two Tests and losing the third. Some allowances should be made, as the selectors were not able to pick all the players they wanted on account of the length of the tour.

Warren Gatland’s squad will follow in his footsteps next year when the Lions visit the current world champions for what promises to be a titanic contest.

The bare bones of Uncle Mark’s career make an impressive palmarès. A big strapping farmer’s son, he was first capped in 1896 at the age of 18 and he played international rugby for nine seasons until retiring in 1904 with 23 Scotland caps to his name and another three Test appearances for the combined British Isles team.

He captained Scotland aged 21, opening his account in 1899 with a 23-10 win against Wales after fighting back from a 10-3 deficit at half time. One contemporary newspaper reported the post-match celebrations.

“Never have I seen such excitement after a match as followed their (Scotland’s) victory over Wales. Prince’s Street was packed with people and when Mark Morrison was drawn (not driven) in an open carriage through whatever lane could be made, the crowd just went delightfully mad.”

Morrison was the first Scottish skipper to win three Calcutta Cups, he won two Triple Crowns (the Grand Slam of the day) and one championship in the course of five seasons. The Triple Crown team of 1901, “Mark Morrison’s team”, was long considered to be the best Scotland team ever to take the field.

His time as Scotland skipper was, according to the Essential History of Rugby Union Scotland: “a period of sustained success which none of his successors have come close to matching”.

Uncle Mark looks out from old photographs, in the colours of Royal High FPs, Scotland or the British Isles team, usually as captain and occasionally cradling a ball like a new born baby in those oversized hands of his but almost always with the same, quietly confident, Mona Lisa smile on his face as if he knew he was at the top of his game and no one could touch him.

His team talk was said to follow the same basic structure. “There are three things I want you to do this afternoon,” he would tell his team. “Firstly, get the ball. Secondly, get the ball and thirdly, get the ball. If you don’t know what to do with it after that, then you shouldn’t bloody well be here.”

He was a natural leader of men and the obvious choice to captain the combined British Isles squad that toured South Africa in 1903, just one short year after the Second Boer War had ended, which must have made playing in the high veldts even more daunting than usual, if that is possible. In fact one tourist recalled the players picking up shell fragments and other souvenirs from one of the battlefields to take home.

After a rocky start, the tourists lost their opening three matches, things improved markedly with nine wins in 13 matches ahead of the first Test. The first two Tests ended in a draw although the opening international in Johannesburg has gone down in Scottish rugby folklore.

Not only was the British Isles captain Mark Morrison Scottish, but so too was the South African captain Alex Frew, who had played under Morrison in the all-conquering Scotland team of 1901. South Africa fielded another Scottish international in the form of William “Saxon” McEwan who had earned 16 Scotland caps, several of them alongside Morrison. Moreover the match referee Bill Donaldson had previously earned six Scotland caps and the plaudits for being the first Scot to score points at their new international ground at Inverleith.

The touring forwards gave a good account of themselves in the three Tests but the South Africans proved too strong in the backs and won the third and decisive Test in Cape Town 8-0. Despite the setback one tourist, Irishman Alfred Tedford, had this to say:

“All said and done we had a glorious time and the friendships made so long ago still prevail…..I must pay tribute to our captain Mark Morrison. He was always the life and soul of the team…no keener man ever played football and, in my opinion, he was one of the great forwards of all time.”

Morrison returned to Scotland and played one last season of international rugby. His final match was against England at Inverleith on 19th March 1904 and Scotland ran out 6-3 winners to extend Morrison’s winning streak against the auld enemy. He retired to the family farm just before his 27th birthday but given he had played nine seasons of Test match rugby he could perhaps be forgiven for concentrating on the day job.

This could have been the end of the story. Instead this is where it begins to get interesting because we see snippets of the man behind the mask. When Superman casts off his cape, a human being emerges and Morrison was a more rounded man and a more interesting character than the two-dimensional sporting hero.

Life was not always as precious as it is now and Morrison suffered his share of setbacks. His first wife died while giving birth to the second of two daughters and only later in his forties did Mark remarry, to the girls’ nanny, and produce three boys.

Two of those sons died tragically young albeit in very different circumstances. Graham Morrison was just 14 when a ferret bite turned infectious and, in an era before antibiotics, the infection got into the blood and proved fatal.

At the outbreak of the Second World War in 1939 another son, Norman, could have avoided military service as farmers were exempt from the draft, but he volunteered for the RAF anyway. Shot down while flying a bomber over Norway in 1941, Norman survived the crash landing on water only to drown because he had never learned to swim.

Mark’s grandson, Norman, the product of his only surviving son Gordon, still runs the family farm in East Lothian and was named after his heroic RAF uncle. He proved a great help with this article.

Norman never knew his grandad Mark, who died before he was born, but he recalls the stockmen on the farm talking in awe of Mark Morrison’s brute strength because he used to lift huge iron weights, used for weighing sacks of potatoes, above his head one handed.

After retiring from rugby, Uncle Mark sat on the local East Lothian county council and he returned to Scottish Rugby’s new Murrayfield headquarters as President of the Scottish Rugby Union for the 1934/35 season, where he was said to be keen to travel and socialise with the next generation of players.

There were other stories about Uncle Mark which help humanise my hero because he appears to have been something of a tearaway in his youth. In an era that had very different views on pre-marital relations, he is said to have not only brought a young lady back to his parents’ house but he evidently made no effort to disguise the fact, leaving two pairs of shoes outside the bedroom door for the maid to clean the next morning.

The other story involves a short trip from one Edinburgh railway station to the other, Waverley to Haymarket, a journey of perhaps one mile in order to win a bet worth £100 (over £10,000 in today’s money). He would earn his reward by making the trip lying on top of the carriage rather than sitting inside it.

This was borderline bonkers. In the age of the steam train, if the smoke from the chimney stack didn’t suffocate you then the sparks from the boiler fire would likely incinerate you. There is no way of knowing if the story is true but it came directly from my grandfather who was one generation south of Uncle Mark in the family tree and knew him well.

His grandson Norman produces a photograph of Mark as an older man. Gone is the spirited smile of his youth to be replaced by something more thoughtful, as befits a man who had experienced his share of ups and downs: a sporting hero and grieving father, reckless youth and revered elder statesman. 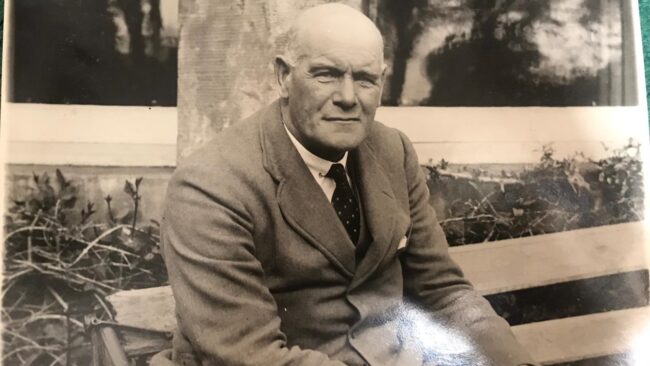 He died on 10th May, 1945 and three days later the Sunday Times ran his obituary which obviously concentrated on his sporting achievements:

“If there is a little doubt as to whether Mark Morrison was the best of all Scottish forwards, there can be none whatever as to the fact that he was the finest leader of a pack that that country has ever had. Big, genial, forthright and a splendid judge of forward tactics.”

But rugby was only ever one part of this remarkable man’s story.

These pieces can be on any subject or person related to the Lions, and in any format – interview, opinion, personal memoir, research or history-based editorial.

In particular, we’re looking for new angles, previously uncovered stories and fresh takes on the long and storied history of the Lions. If you have an article to pitch, email office@lionsrugby.com.

Iain Morrison was born in Edinburgh and educated at Glenalmond College. He won two Cambridge Blues in the 1980s and 15 caps for Scotland in the 1990s, finishing his international career with a 48-30 defeat by New Zealand at the 1995 Rugby World Cup.
He worked in the City of London for 13 years before becoming a sports journalist in 1998. He has been the chief rugby writer for the Sunday Herald and the Scotland on Sunday and he currently works for theoffsideline.com.